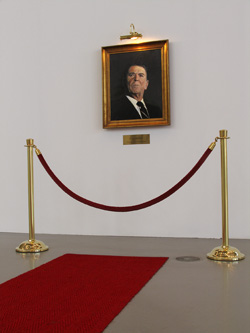 Since his poignant installation at the 1993 Venice Biennale, in which he smashed up the marble floor of the German pavilion as an aggressively fractured monument to his homeland, Hans Haacke has become a bankable designer of public memorials. Berlin is home to two of the artist’s larger and more recent such projects – Denkzeichen Rosa Luxemburg (Memorial Rosa Luxemburg, 2006) in the Rosa-Luxemburg-Platz and Der Bevölkerung (For the People, 2000) at the Reichstag – so it seems appropriate that the city was recently co-host, with Hamburg, to the biggest exhibition of Haacke’s work to date. Though not officially a retrospective, the show, entitled ‘wirklich’ (real) – Works 1959–2006’, encompasses the full range of the artist’s oeuvre, from his photographs of the late 1950s, through his minimalist works of the 1960s developed after his early affiliation with the German artist group ZERO, to the politicized installations of the 1970s.

Haacke’s interest in closed physical systems, biological growth and random movements manifested itself in works such as Condensation Cube (1963–5), a moisture-filled Plexiglas con-tainer whose appearance altered constantly in relation to its environment. By the end of the 1960s, however, Haacke had shifted his focus to another type of autopoietic system, analysing it in political and sociological terms: the art world. In Gallery-Goers’ Birthplace and Residence Profile (1969–70), for instance, Haacke inverted the mores of exhibitive logic and made the visitors to his shows the subject of his work, by quizzing them about aspects of their personal lives and then displaying the results. Shapolsky et al… (1971) took this approach further and presented the findings of Haacke’s research into the underhand business dealings of a New York real-estate company with strong ties to several art institutions, in a work that conflated stripped-down pictorial serialism in the style of Ed Ruscha with an acute awareness of economic underpinnings.

Famously, Haacke’s refusal to withdraw the piece from his solo show at the Guggenheim Museum in 1971, led to the exhibition being cancelled. Haacke’s career has, of course, been undergirded by a heroic narrative of institutional neglect and censorship that con-tinues to nourish his credibility as a political artist: on another occasion, his Manet-PROJEKT ’74, which detailed the provenance of Manet’s Bunch of Asparagus (1880), was rejected by the Museum Ludwig in Cologne since it revealed the Nazi-era career of patron and Deutsche Bank chairman Hermann Josef Abs, who had given the painting
to the museum as a permanent loan.

By the end of the 1970s, Haacke’s work had become more aggressively political – albeit in a more allegorical way – and throughout the 1980s the artist required ever-larger spaces to acommodate his ‘factographic’ installations. In A Breed Apart (1978), Haacke reworked an advert for Jaguar cars by British Leyland to accuse the company of supporting South Africa’s apartheid regime by selling it police and military vehicles. In Ölgemälde, Hommage a Marcel Broodthaers (Painting in Oil, Homage to Marcel Broodthaers, 1982), shown at Documenta 7, Haacke hung a portrait painting of Ronald Reagan (executed by the artist), with its intended implications of stately respectability, opposite a large-scale image of a crowd protesting in Bonn against Regan’s lobbying for the deployment of American missiles in Germany.

To this day, Haacke has continued to scrutinize contemporary political issues – attacking com-panies like Philip Morris, Mobil Oil, Mercedes-Benz and Deutsche Bank among others – and thus the art world’s Achilles’ heel: its complete dependency on big money. As Benjamin Buchloh argues in the show’s catalogue, Haacke was never so naive as to expect change to be triggered by his practices, but simply kept asking the right questions in the right place and at the right time. Yet his taut moralism has increasingly tended to overstatement and there is unquestionably a paternalist impulse in the way Haacke often asks the questions and devises the answers in one go, rejecting the option of being more ambivalent, even unsure, about issues.

While ‘wirklich’ constituted a comprehensive archive of Haacke’s many projects, and confirmed his work’s central concerns with processes, site-specific interventions and the delegitimization of idealistic claims for art, the artist’s life-long rejection of the notions of ‘style’ and ‘personal expression’ was somewhat undermined by the very conditions of presentation. A lot of his ‘formalist’ works of the 1960s, for example, showed surprising stylistic consistencies to his better-known and seemingly more topical pieces from the following decades. The Perspex boxes of the 1960s resonate in his later picture boxes, the early kinetic works in recent proposals for monuments. Wide White Flow (1967), a machine piece in which a huge veil-like fabric gently flutters over constant streams of air, even managed to enliven the clunky solidity of newer works.

One of Haacke’s most intriguing pieces remains Seurat’s ‘Les Poseuses’ (small version) 1888-1975 (1975), in which he outlines the work’s changes in ownership along with some biographical data. Using only a few sheets of printed paper and some frames, the piece delivers a perfectly encapsulated history of art distribution and economic change from the late 19th until the late 20th century. The violence of an epoch is present between the lines, and for once it is really left to the viewer to fill in the gaps.