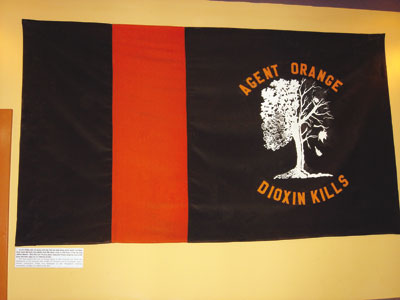 Photography, from magazines to television to the Internet, has become smooth, polished and seamless. Its sexy gaze makes everything look better as it edits or airbrushes out any imperfection – be it a mole or misery. War becomes more abstracted; both in language (by politicians) and image (by news coverage and the movies). True, there are amazing photojour-nalists risking their lives and documenting the best and worst of humanity, but somehow that is not what we are usually given: unfiltered pain, poverty and suffering don’t sell much ad space; deformities, dismembered bodies and torture sell even less. In a project entitled The American War (2005) – the title uses the Vietnamese name for the conflict that ravaged that country four decades ago – Harrell Fletcher compiled a wealth of images culled from the walls of the War Remnants Museum in Ho Chi Minh City, showing with simplicity a perspective rarely considered.

So taken with what he saw there, Fletcher used a digital camera to document literally everything on the walls, from the framed photographs and posters to wall labels and signs. Shot hand-held, there is no art and little skill to these photos: just a simple attempt to keep the flash from reflecting off the glass. (Hence the skewed and cropped views of many of the works.) Set simply in pine frames and placed on a pleasant sky-blue and white wall, each image is accompanied by a smaller framed photograph of the corresponding wall text, as it was in the museum. What we see are photographs of photographs, usually taken from yet another source: books, magazines or newspapers – many of them Western. Immediately we are met with a series of black and white photographs of faces; some scarred, others completely obliterated. Scanning the photo of the wall labels, we understand: ‘Victim of Orange Bomb’, ‘… of Phosphone Bomb’, ‘… Steel-Pellet Bomb.’ These instruments and their implementation always end up meeting someone’s face. We know these things to be true, but seeing them plainly makes that horrible foggy notion real. Elsewhere are other grainy photos: buildings destroyed, bodies piled up and covered. Once again the wall text brings home a different reading of the group of corpses: ‘Ms. Hoa’s Family in Khan Thien, Hanoi, was killed by B-52 bombs on Dec. 26, 1972.’ Personalizing the victims without sentiment gives them a specific and first-hand dignity that was lost even to the sympathetic contemporaneous Western photojournalists, and reminds us that the mourning continues.
Even in their outright, arbitrary amateurishness Fletcher’s photos accomplish something that many fail to achieve: they testify. In their tiny acts of refusing to forget, refusing to look away, these images gain a moral gravity that is unequivocal. Clearly, the effects of warfare continue to reverberate throughout a culture, a nation, a people. On one wall were displayed colour photos of deformed children, some of them born well into the 1980s, disfigured by the US military’s use of the chemical defoliant ‘agent orange’. To imagine that wars stop with the departure of the last helicopter is really to think of military operations as a form of road-show ‘theatre’ – once we are off-stage, things will return to normal, we imagine, not realizing that ‘normal’ is never the same again.

At the entrance of the exhibition a grainy black and white image of 50,000 anti-war protesters filling the Mall in Washington D.C., with the Capitol building looming in the distance, stands opposite a wall with a photo of a US soldier curiously straddling a captured Vietcong. While the grunt casually smokes, another G.I. holds down the prisoner and casually pours a canteen over his covered head. The photographed wall label makes everything crushingly clear and all too familiar: ‘They decide on a water torture. A rag is placed over the man’s face and water is poured on it, making breathing impossible.’ Between these two images the parallels with the ongoing fiasco unfolding now in Iraq, from water-boarding to the protest marches, make one wonder if the lessons offered by this archive can ever be learnt. If we all really looked, really saw and comprehended, the realities of war – its carnage, its waste, its dull insipid cruelty and the pathos of its multigenerational ramifications – would anything change? Images like these alone can’t stop a war, but perhaps they could allow a people to find some collective empathy that might give them pause before unleashing such bloodshed again. This show has travelled around the country and should be seen far and wide, so hopefully there will be fewer shows like it in the future.