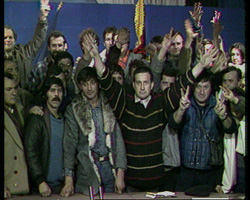 Is Harun Farocki’s Videogramme einer Revolution (Videograms of a Revolution, 1992) art or documentary, or both? Well neither really; Farocki’s works assemble early evidence of the instrumentalizing and inverting of surveillance technology; of citizens surveilling the powers that be. In the case of this piece, it is footage of the 1989 Romanian revolution that saw the collapse of Nicolae Ceaus¸escu’s regime. Farocki’s film is a ‘narrative-compilation’ comprised of videos made by activists or onlookers, combined with documentation from state television (which quickly sided with the uprising). And it is compelling. Once in the hands of activists, video cameras became the conduit between where news was made and the world beyond. At first the handheld camera spread news rather than made it, but Farocki, and not a few others, saw the camcorder as the political means for ushering in the era where spreading the news would become the news. And time has proved the artist right: consider only the recent mobile phone video that recorded the macabre humiliation of Saddam Hussein’s final moments; those two minutes and 36 seconds that impossibly turned despot into martyr.

Farocki produced Videogramme einer Revolution in the same year that George Holliday famously taped the battering of Rodney King, which ultimately led to the riots that lay siege to Los Angeles in 1992. By the time police and the National Guard restored order, over 50 people lay dead and the city had suffered one billion dollars in damages. Framed between King and Hussein’s obloquy, the political influence of inverse surveillance has left a very deep imprint. This screening is the opportunity to take the long view and ask which is more politically significant: the fall of Ceaus¸escu, the rise of the Orange Revolution, the thousands of citizens in Beirut who paralyzed Prime Minister Siniora’s government, the shock and awe in Baghdad at Hussein’s execution or the fact that large democratic societies were made witnesses to these events, often in real time? Farocki works in the third person, not the first, and thus his narrative collage of eyewitness accounts has become – in the intervening years – less and less about simply witnessing political change and more and more about mobilizing soft power in the hands of citizens with cameras.

Videogramme einer Revolution was the main attraction at Index, although 12 more Farocki films were available for screening on request, creating a video-archive-as-retrospective. Included was the 1969 film Nicht löschbares Feuer (Inextinguishable Fire) that unpacks the American chemical industry’s complicity in the Vietnam War. Auge/Maschine (Eye/Machine I–III, 2001–3) and Gegen-Musik (Counter Music, 2004) scrutinize contemporary visualization practices used for surveillance and industrial production. Ultimately, the debate as to whether these films constitute documentaries or art only hinders our appreciation of their compelling subjects. Suffice to say that Farocki, in his collaboration with Index, has succeeded in conflating contexts by transforming an art venue into an arena for independent investigative reporting; a transformation of little consequence if measured against the impact of Romanian revolutionaries and Iraqi guards recording history in a way that speaks for us all.

Videogramme einer Revolution not only looks back on a political story forecasting the influence of soft power, but foreshadows the seismic cultural shift ignited by YouTube (where you can watch the LAPD mauling of Rodney King, and scenes of the Romanian revolution), the video-sharing website that helped make you and me TIME magazine’s Person Of The Year 2006. Even though YouTube is yet to magnetize substantial revenue, media strategists largely agree that it represents the next phase in the evolution of the internet, where communication moves from the written word to video streaming; the same relative difference between Marx’s 1848 manifesto and Videogramme einer Revolution. Have revolutions become entertainment? Farocki’s film also reminds us that the power exercised by citizens with cameras does not always work for the greater good. What happens when the strategy of fiction used so persuasively by lonelygirl15 on YouTube (over 24 million cumulative views) is mixed with political realities volatile and uncertain?

‘What’s happening where you are? Is news happening in front of your eyes? Pull out your camera and I-Report it for CNN;’ become our citizen with a camera bids the 24-hour news network. Such an invitation would have meant little to Romanians in 1989, but it means everything in a world where the total number of images captured on camera phones will reach 228 billion by 2010, exceeding the number of photos taken on digital, still and film cameras combined. The soft power Farocki’s Videogramme einer Revolution captured in its infancy is now in full flower; anyone with a mobile phone is at-the-ready to bear witness. The art world will probably inelegantly negotiate its way through this new style of commercialized realism. Undoubtedly, Andy Warhol would have thrived in such an instantaneous world; in many respects he anticipated it through the lens of his Polaroid. But then so too did Goya in two etchings from his ‘Disasters of War’ series (1810–15) titled I saw this and And this too.