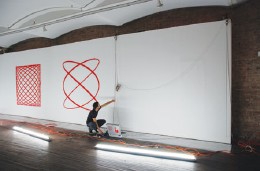 Imagine if your TI-82 had the ability to wield a can of spray paint. Meet Hektor. He’s a spray can, two micro-controlled stepper motors, cables, pulleys and computer-coordinated belts, Hektor isn’t merely a robot, he’s a portable, laptop-driven graffiti artist.

Hektor is the brainchild of Swiss artist, designer and developer Jürg Lehni. His most recent project consisted of a series of large-scale graphics painted on the walls of the Swiss Institute. The ambitious six-hour event took place in front of an audience as Hektor, assisted here-and-there by Lehni, spidered around the gallery and entryway walls etching out his unique brand of nerdy vandalism. In the end, eight stop sign red spray-paintings were positioned around the space. Of those, four were destroyed the following day. The other four will remain on view in the front entrance for the next year. Each painting comprised of twists and concentric ellipses inspired by the Lissajous Curve – a horizontal figure-eight easily mistaken for an infinity sign that was named after the 19th-century French mathematician, Jules Antoine Lissajous.

The Lissajous Figure is a graph of a two-variable parametric equation as it iterates itself over time (remember plotting parabolas in trigonometry class?).Prior to modern computer graphics, the Lissajous Curve was typically generated using an oscilloscope, but now, thanks to Adobe Illustrator vector graphics and a scripting plug-in designed in part by Lehni himself, Hektor is able to recapitulate the same algorithms into an art of precise, lo-fi graphics. Taking no more than 15 minutes to complete each one, Hektor first ‘primes’ the surface, tracing out the image without releasing any paint. Once he’s learned his way around, at the touch of a button the paint is methodically applied, sometimes dripping or splattering a little if the mechanism wobbles.

For the first time in Hektor’s career, Lehni opted to integrate an aural component into the process – an homage to Lissajous who experimented with creating ways to see sound. By positioning two microphones over Hektor’s motors and amplifying his mechanical whirrings, Lehni was able to give his creation the ability to generate its own hypnotic, techno-inflected soundtrack. The duo also collaborated for the first time with Dexter Sinister, a Lower East Side print shop/design studio/bookstore cooperative, which produced an accompanying pamphlet explaining, among other things, Lissajous Curves. Dexter Sinister is a natural pairing for Hektor as the shop’s owners, Stuart Bailey and David Reinfurt, have created an ad-hoc, all-in-one publishing house, specializing in alternative distribution and graphic design.

In the burgeoning field of painting automatons, Hektor is not the only machine out there with graffiti capabilities. GraffitiWriter for example, a robot created by the Institute for Applied Autonomy, employs a multitude of spray cans to write linear text messages on the ground at 15 kilometers per hour. By comparison, Hektor’s manoeuvering seems a bit clunky, and though Lehni insists that this quality gives the designs their ‘inherently particular and distinctive aesthetic’, it’s hard to see the robot as little more than a showcase for technological advances. However, when process is taken into account, Lehni and Hektor are undeniably an artistic duo. When the two are in the room together, interplays between sophisticated and crude technology, graphic design and studio art, man and machine are all on display, prompting viewers to consider Lehni’s ideals and the promise of Hektor’s evolution. Their partnership calls attention to the nascent stages of a new genre and a host of new questions about art. Domo arigato, gentlemen.