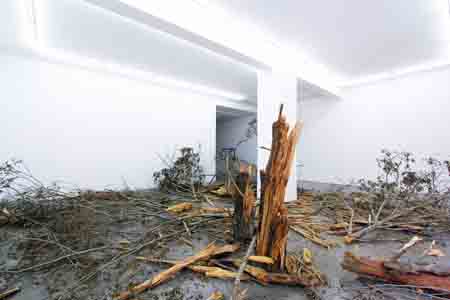 I once saw a Henrik Håkansson film in which his camera tracked a bird through the sky so it appeared like a still image in the centre of the screen. Real time was framed as the cessation of time. In Håkansson’s installation at Meyer Riegger, Aug. 11, 2012 The Symptoms of the Universe Studies. (6 min 29 sec)­ (2012), something like the opposite occurred. Four monitors and a large projection showed two black trees in a field in Sweden ­– from various angles, and at various film speeds – as they exploded, one after the other. Monitors showed the event in real time from a range of vantage points, like keys to the slow-motion spectacle that was displayed on a larger monitor and in a five-metre-wide projection. On one imageless monitor, a digital stopwatch running to twentieths of a second counted down. The front room of the gallery was rendered inaccessible by the strewn remains of the trees. Real time was atomized or fragmented, as in a Cubist painting, into a spectrum of perceptions and evidential modes, both real and mediated. Where the bird’s image had neutralized time, the trees exposed its relativism – or should that be its relativity?

There is a minor cinematic tradition – including, for example, Jim Jarmusch’s Mystery Train (1989) and the recent blockbuster Source Code (2011) – that trades on the illusion that the past can be seen more thoroughly, and from more perspectives, than could ever be possible in a single person’s memory. Typically elusive, these movies reassure us with the illusion that the past is open to scrutiny. Håkansson’s installation dramatized an empirical conceit, but not in order to bolster our sense of the past’s knowability, but to disorientate it. All the facets – and the faceting itself – of the installation were pitched to undermine the authority of the scientific methodological model it adopted. That model is predicated on the existence of a verifiable reality, and the possibility of a categorically accurate account of it. Håkansson insinuates irony into this absolutist position by positing a relativistic spectrum of versions of a single event, which initially appear to consolidate the representation, but, in fact, question the possibility of any ‘true’ record. Similarly, he flouts the emotional neutrality of objective scientific enquiry by using its methods as a conduit for an elegiac gesture. Håkansson’s flayed trunks are symbols of Romantic 19th-century landscape painting – such as those of Caspar David Friedrich – while the image of a leafy tree offset by clouds might have been drawn from a painting by John Constable or Jacob van Ruisdael. But for a good proportion of the projection’s cycle, the large canvas was a blank grey monochrome, waiting for the stopwatch to release its image. The film had begun with the date of the explosion rendered in a font familiar from On Kawara’s date paintings. Håkansson riddled his soil with art clues waiting to be unturned.

During the protracted ‘moment’ of detonation, the trees lit up from within, sending heat waves through the air – an image alluding to the pervasive cinematic culture of smash-and-bang CGI effects as much as Modernism’s dismantling of the figurative image. The flicker of emanating debris recalled Futurism’s galvanizing of the shards of Cubism into bursting shrapnel. Håkansson’s empiricism proves to be fissured with Postmodern reference; he may seem to have his eye focussed squarely on the unfolding of occurrences within a measured time frame, but he is conscious of that vision’s porousness to wayward signification. The ideal of pure documentation – which is also that of an unadulterated perception ­– therefore falls into place as another adopted guise, a function of presentation.

And yet this corruption of the empirical position – which could have been merely cynical – is complicated by the vein of environmentalist fervour that underlies all of Håkansson’s art, and rescues it from the more predictable position of an artist donning ecological commitment as a worthy stance. By exploding the trees – which were, in any case, due to be felled – Håkansson inflicted damage onto nature to produce a visual metaphor for environmental catastrophe. The sharp edge of the gesture is his trust that his own implicit commitment will run the risk of hypocrisy and the charge of political dilettantism. But if Håkansson’s Swedish landscape is a neutral testing ground, and a repository of art-historical references, it is also a clearing heightened by the innocence he projects onto it, a prelapsarian realm. Three monochromatic ‘earth paintings’ in the gallery’s office space – consisting of soil from the site of the explosion affixed onto squares of canvas – were therefore not merely signs for the Modernist monochrome, but gravestone-like slabs conveying a sense of loss, the gravity of which depended on the belief that had been invested in what has been lost. The fall from grace only comes with the bang.