The explosion of online role-playing games is causing legal, moral and financial repercussions in the real world 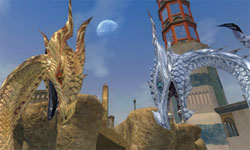 n David Cronenberg’s film eXistenZ (1999) the two lead characters enter a virtual reality game that is almost indistinguishable from real life. Video-game quirks can only be found in the details: buildings are labeled generically (a gas station is simply called ‘Gas Station’), and the actions of minor characters are looped until they receive a verbal prompt. When the protagonists, in a typically Cronenbergian development, decide to play a virtual reality game within this virtual reality world, what is real and unreal becomes increasingly blurred. ‘I’m feeling a little disconnected from my real life. I’m kinda losing touch with the texture of it’ says one of the characters; ‘I actually think there is an element of psychosis involved here’.

No film has come as close as eXistenZ to pinpointing the joys and fearful dislocations of video games, in particular the Massively Multi-Player Online Role-Playing Game or MMORPG. These are shared, virtual worlds within which sometimes millions of people interact. In games such as EverQuest, Mu, and Ultima Online players can earn money, buy clothes, fight monsters or perform an endless array of tasks in an almost unlimited array of guises. It is this multiplicity of options that has seen the number of online gamers grow exponentially in the last decade. World of Warcraft, a particularly popular MMORPG, recently registered its five-millionth subscriber, and it is estimated that around 30 million people worldwide are represented in a game world by an avatar – the graphic image of the user.

The success of the MMORPG relies on a rather different form of immersive technology to the sensory-delivery hardware shown in Cronenberg’s film. Rather than fool the brain into thinking we are elsewhere, today’s MMORPGs rely on emotionally engaging software to absorb us. Absolute verisimilitude is not necessary for total immersion, but imagination is essential. If everyone believes a dragon is real then for that world it is real.

Dragons are present in almost every MMORPG as the aesthetic of the vast majority of these games is drawn directly from the writings of J.R.R. Tolkien. It is one of the most surprising characteristics of MMORPGs that regardless of whether they are being played in Seoul or San Francsico, Tolkien’s quasi-medieval vision is almost always replicated. While his books drew on myths hard-wired into the western imagination, the attachment of the rest of the world to his images would seem less intrinsically strong. Tolkien’s work, however, offers something simpler than myth: an aesthetic escape from a post-industrial era (most MMORPG players, after all, live in cities), and a shared mythology of dwarves, orcs and wizards, that, being all equally distanced from, we can all feel equally nostalgic for.

Nevertheless the increasing seriousness with which these games are being treated by non-gamers is not due to aesthetics but largely to the money that they have begun to generate. To take part in a MMORPG involves a monthly subscription fee, but this is not why sociologists, economists and psychologists are getting excited – it is due to the trade in ‘virtual’ goods. Edward Castronova’s Synthetic Worlds: The Business and Culture of Online Games (2005) recently calculated that the commerce flow of all MMORPGs – largely generated by people buying and selling items such as swords and magic staffs – is $100 million annually. Castronova also calculated that the GNP per capita of the game EverQuest alone – a game with over 500,000 subscribers – was $2000, making its economy comparable to that of Bulgaria’s. Indeed such is the money changing hands that in the real world gaming farms have been set up in third world countries, wherein workers relentlessly perform the tedious ‘treadmill’ tasks that gain players their skills and virtual money. Once these chores have been completed the goods are sold on eBay for very real dollars.

As trade in MMORPGs grows more complex, the ‘membrane’ between the real world and these synthetic worlds is shifting in both directions. For instance, avatars are now gaining enforceable legal and moral rights in the real world to protect both their online property and their survival online. In both South Korea and China, hackers who stole players’ virtual goods or threatened the user interface have been successfully prosecuted in real-life courts.

Trade is only the tip of the iceberg. A whole host of social, and anti-social functions from the real world are making it into the virtual one – and not necessarily at the game designers’ decree. Funerals, protest marches, prostitution, blackmail and extortion have all become commonplace in MMORPGs, just as avatars are increasingly making their presence felt in the real world. The fact is that MMORPGs are not just the escape from ordinary life that most people derisively think them to be. For synthetic worlds find their significance not in the radical differences between themselves and reality, but in being so similar as to present a comparable option.

As MMORPGs become increasingly sophisticated, and more and more people migrate towards this synthetic frontier, Castronova sees the membrane between virtual and real worlds melting away completely. Avatars will become such persistent extensions of their human users, and users will identify with them so closely, that the human-avatar will be thought of as a cyborg. As such we will not be suffering from a psychosis when we enter our virtual worlds in the future; for they will be as much a part of reality as we are – or we will be as synthetic as they.