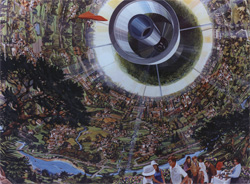 In the essay that inspired the title of this wonderful exhibition, ‘How to Build a Universe That Doesn’t Fall Apart Two Days Later’, cult science fiction writer Philip K. Dick confessed that he liked to create universes that fall apart, in order to see how his characters would adapt to change. Curated by Will Bradley, this show is more like a list of ingredients than a recipe for creating a world from scratch. The absence of explanatory wall texts, titles or other didactic information allowed viewers a chance to make connections organically, from work to work, leading to the possible conclusion that the particular cosmos created here would not implode but would be, like our own world, a beautiful mess (albeit with more attention paid to the vulnerable and dispossessed, a nod towards creative solutions and more hope to spare).

In Gitte Villesen’s photo and text work Tyner (2001), a homeless man explains how kids can build toys from wood gleaned from a Chicago ‘reuse centre’, suggesting that nothing (and no one) should just be tossed out. Community activist Bonnie Sherk’s well-known photos, drawings and designs for the Crossroads Community, or The Farm, which over the years were rolled up and carried around to every civic leader and dignitary she could find, showed that relentless optimism and belief in one’s home and neighbourhood can create a community, even within misused and abused sections of a city. Urban theory cropped up in a number of the pieces, but Solmaz Shahbazi’s documentary film Tehran 1380 (2002), co-produced with Tirdad Zolghadr, was outstanding. Through interviews with numerous Tehran residents Shabazi sheds light on a metropolis dealing with all the problems and successes that rapid growth and modernization bring. Seeing how people are coping with and adjusting to these changes was affirming, but seeing the everyday humanity of a citizenry labelled as belonging to an ‘Axis of Evil’ was even more so. Unsurprisingly, their problems and desires are not so unlike our own. This discovered common ground does more than simply raise awareness about shared issues of urbanism; it makes the categories of ‘enemy’ and ‘friend’ seem absurd in the extreme.

Shaun O’Dell’s suite of drawings ‘Getting Right with the Sun: Confronting Death and the Material Reality of the New Apocalyptic’ (2006) takes us on a visual journey through history and time, with gouache and pencil renderings of lovely arrowheads, atomic abstractions, mastodon skel-etons, even the ruins of Nagasaki. The scope of O’Dell’s references is amazing, but the impeccable draughtsmanship in these works constitutes a dizzying testimony to where we have been and where we may be headed. Indeed, the qualities of many of these works fall somewhere between a funhouse and an acid trip. Andreas Dalen’s drawings of structures have all the visual pyrotechnics of a laser show, as in Into the Spectacle (2004), where rainbow tracks from a tubular roller-coaster head off into a chequerboard void. Nate Boyce’s lo-fi computer video Mind over Matter (2006) begins in a small room with a brain floating near a sword. Each time the sword touches the brain, the video fizzes and crackles with bursts of colour and a relentless hash of static. The metaphors begin to pile up as sword and brain merge in a swirling cacophony of psychedelic explosions, but the overriding analogy is that of pure creation: if the Big Bang began like this, it would not be surprising.

William Scott’s works greeted viewers with messages of irrepressible positivity. Three drawings, by the artist known for his visionary plans to redesign the entire city of San Francisco, showcased some curvaceous ladies grinning in profile, booties ready to shake on the ‘Citizen Ship’ that is presumably going to take us on a journey to find our ‘Inner Skylines’. With such bafflingly joyous ramblings on offer, you simply want to hop aboard and join in the fun. Not far removed from these works lie the illustrations Rick Guidice made for NASA about future space colonies. Looking at the Interior of the L5 Torus Shaped Colony (1975), we see spread out in a gentle cylindrical arc nothing less than an American suburb that has been fashioned into a space station, rotating on a giant hub so as to create an environment of artificial gravity. The remarkable thing about this image is not the thought of ball fields and subdivisions in space, but that (as the group of happy boozy people in the lower right corner suggests) the stark realities of the interstellar void are imagined as not affecting the late-afternoon joys of a swinging mid-1970s’ lifestyle one bit. Dick surmised that what was best in us was the heroism of ordinary people able to say no to tyranny. I would add that any folks brave enough to say yes to a cocktail party in outer space are heroes as well, and the universe they gaze out on over their martinis is going to last as long as they keep enjoying it. This show gives plenty of reasons to keep the party going for a long time.