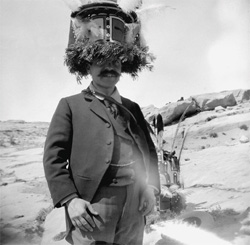 In 1877, and again in 1881, the German painter Albert Richter travelled the prairies of America. Embracing the adventurous life of a hunter-gatherer, he left the galloping industrialization in Old Europe far behind. In fact, Richter preferred the archaic form of galloping; his love of drawing horses evidenced in works such as Des deutschen Squatters Weihnachten im fernen Westen (The German Squatters’ Christmas in the Far West, 1890). The English word ‘squatter’ in the German title of this work refers to the precarious position of the white settlers, who were all too aware that they were doing something illegal, or at least dishonest, by occupying the land of indigenous tribes. While this guilty conscience is alluded to in the title, the image itself is pure frontier idyll: a woman stands before a snow-covered log cabin, a baby on her arm, surrounded by three German shepherd dogs, welcoming her husband back from the hunt. Decked out in trapper’s gear, a smoking pipe in his mouth, he sits astride a proud stallion, a freshly killed deer in front of him while in his hand he holds, like a bayonet, a little pine tree: German Christmas in the West – or the ‘der Ferne Westen’ (the Faraway West) as it was still known at the time.

The exhibition ‘I Like America – Fictions of the West’ amply documented this longing to travel to the faraway land, a yearning Richter shared with many painters of his time: his drawings are typical of the petit-bourgeois, escapist dialectic evinced in many works by these German Wild West painters. In the exhibition’s catalogue, Helmut Schmiedt speaks of a ‘domestication of the exotic’ and describes the hero as ‘always a parochial German in a parochial environment’.

Schmiedt is the biographer of the writer Karl May, the biggest-selling German author of all time, whose adventure novels are the first books many German speakers ever read. His proto-hero is Old Shatterhand, the noble fair-haired German who goes West to bring Christian values to the savages and who finds a willing taker in the Apache chief Winnetou. The redskin and the white man become blood brothers, and the bloodthirsty warrior, in the words of May, becomes ‘Winnetou, der Edelmensch’ (the noble human).

Winnetou, The Half-Blood, The Treasure of Silver Lake and other Wild West novels supplied the texts that ran through the exhibition. Ironically, May never went to the Wild West himself; he explored it from the comfort of his desk, which, laden with Wild West paraphernalia, takes pride of place in the exhibition. One of May’s most important sources was George Catlin’s Letters and Notes on the Manners, Customs, and Condition of the North American Indian (1841). Catlin, whose opulent prairie paintings occupied a central position within the show, was exactly the kind of multitalented artist-adventurer the lawless and uncharted Wild West called for. He worked as a painter, writer, showman, ethnographer, anthropologist and touring lecturer. Sometimes he acted as a friend to the Native Americans, sometimes he exploited them. Often enough he did both at once, as when he exhibited the members of the tribes themselves in his ‘Indian Gallery’.

At the turn of the last century, such Wild West shows toured all over Europe, but nowhere were they more popular than in the German-speaking world. (Today, the same applies to Rock fossils like Joe Cocker, Chris de Burgh and Phil Collins.) During these spectacles, in a kind of inverted tourism, Indians presented themselves and their folklore in a way that adhered to what the Germans knew of the Wild West from May’s novels. The most popular of these shows, ‘Buffalo Bill’s Wild West’, was seen in Germany by more than 100,000 people. Indeed, May modelled his hero Old Shatterhand on Buffalo Bill after seeing the show himself. It wasn’t long before the great fabulist slipped into a leather costume and announced: ‘I am Old Shatterhand!’

May’s admirers include the Marxist philo-sopher Ernst Bloch, the Austrian writer Peter Handke and Adolf Hitler, whose ideology of Lebensraum was inspired by the notion of the Western frontier and who was attracted to May’s construct of the Edelmensch or ‘noble human’ (a sort of missing link between Friedrich Nietzsche’s ‘Übermensch’ and Adolf Hitler’s ‘Herrenmensch’). May’s vision, ‘that in the place of the Yankees, a New Man will emerge whose soul is German-Indian’ was implemented by Hitler in modified form: for ‘Yankees’ read ‘Jews’. The ‘Fictions of the Wild West’ referred to in the show’s title proved susceptible to being variously co-opted, and one of the many ways of reading this valuable exhibition is as a history of the mentality of Germany on its way towards the Third Reich.