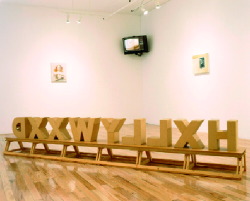 In a press release that otherwise tends towards sloganeering, Slater Bradley, curator of 'I, Assassin', reproduces lengthy extracts from Michel Houellebecq's novel Atomised (1999) and Henry Miller's The Time of the Assassins (1946). Both pieces of writing describe the collapse of dominant ideologies; in Houellebecq these paradigm shifts come about through the unpredictable appearance of 'metaphysical mutations'‚ while for Miller it is the poet who must accept responsibility for societal trans-formation. Bradley himself puts the hit man's pistol in the hands of the art world, suggesting that when artists, curators, collectors, critics and dealers happen to train their sights on the same targets, some real damage can be done. 'Their world blindly begins its downfall'‚ he writes, in emulation of Miller, 'as they pull the trigger, one by one.' Only time will tell whether 'I, Assassin' truly represents such a moment of deadly convergence - certainly, my world still seemed to be there last time I looked - but Bradley's aim feels true none the less. Wallspace is a small gallery, and this looks at first glance like an unassuming exhibition, but the selection of work is more complex and demanding than its modest scale and calm arrangement might imply.

Echoes of the Pop cultural landscape that Bradley explores in his own art crop up in the likes of Brad Phillips' Sebastian Drama Queen (2003), a painting of a typically dour Joy Division poster pinned in a shadowy corner. (In 2002 Bradley made Factory Archives, an eerily convincing video that appeared to show the band's frontman Ian Curtis on stage but which in actuality featured Bradley's own lookalike who, in an extraordinary double bluff, stood in for both artist and singer.) Jason Meadows' Untitled (Hxllywxxd) (1997), a chunky wood and board construction in which the place name remains instantly recognizable despite the spelling, functions as a more scattershot reference to Bradley's fascination with the entertainment business, specifically its treatment of death.

It was an unexpected pleasure to encounter Mat Collishaw's video Blind Date (1995) in such a context, and its pairing with Christian Marclay's Blind Television (Hitachi) (2000) makes a deal of sense. In Collishaw's Beuysian home movie the artist takes an E-ed up, sightless trip to the Prado in Madrid. After removing his blindfold only to gaze for a few awestruck seconds at Diego Velázquez' Las Meninas (1656), he heads home to London a changed man - perhaps. In Marclay's simple but effective intervention the screen of a corner-mounted TV has been replaced by a mirror; the sound plays on, but we see only a reflection of the gallery interior and our own gawking selves. Both works exploit our habitual privileging of the sense of sight, playing with ideas about the value of the image, the aura of the unique work of art and the pervasive influence of the mass media.

Another still closer double act is performed by Martin Kippenberger and Jay Batlle. Kippenberger's Untitled (Mencey Hotel, Spain) (1988) is a cartoonish ink sketch of a rearing horse being urged into battle by its rider. Batlle's Places Like This Hate People Like You (2003-4) is a copy of the same work made on different stationery (from Château Marmont) and inserted into a copy of the late German artist's NO DRAWING, NO CRY, a collection published after his death. The tribute is an odd one, clearly heartfelt but unafraid to obscure its ostensible subject's own work in favour of a naturally imperfect imitation. As he has demonstrated with Factory Archives and again, more recently, with the Kurt Cobain homage Phantom Release (2003), Bradley's attitude towards the idolization of creative individuals is, rightly, an ambivalent one. The fascination of Curtis and Cobain is that they were gunning for culture and yet were gunned down by it; assassins assassinated.