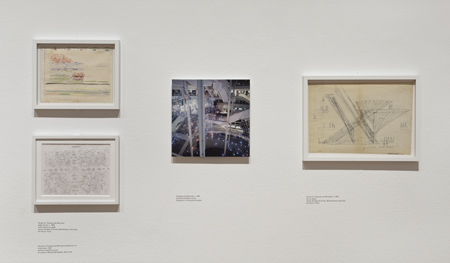 The work of Greek avant-garde composer Iannis Xenakis has experienced a resurgence in popularity over the last decade, due in large part to the rising visibility of computer-generated musicianship since the late 1990s. Working under the rubric of ‘millennial’ dance music – a hybrid of early ’90s ambient with more sophisticated programming software, real-time playback interface and an emphasis on techniques such as generative synthesis – artists like Autechre, Vladislav Delay and Alva Noto have embraced Xenakis’ algorithmic approach to micro-tonality. Largely produced in the pre-computerized, pre-digital domain, Xenakis’ compositions were, by contrast, ‘programmed’ in the most rudimentary fashion – with pencil and paper. The resulting drafts often contain abstract curvilinear or arborescent designs that represent dense geometries of acoustic and electronic sound. The Museum of Contemporary Art (MOCA), in association with The Drawing Center in New York, collected hundreds of these sketches for the exhibition ‘Iannis Xenakis: Composer, Architect, Visionary’, which spanned Xenakis’ career from his initial collaborations with Le Corbusier to his final multimedia polytopes, confirming the musician’s claim that ‘the hand is the organ of the body that is closest to the brain’.

Apprenticing as an architect prior to his excursions into musical composition, Xenakis was acutely aware that sound was an environmental as well as sensual experience. In his earliest sketches, which resemble something akin to blueprints, he discovered the revolutionary potential of the ‘hyperbolic paraboloid’ – a series of parabolas connected by vertical ‘tents’ – in reframing both the spatial and harmonic frame. Metastasis, scored in 1953 and considered to be his first fully realized musical work, utilizes this curved, crosshatched figure to symbolize the unique ‘sliding’ frequencies of glissandi, an effect that would feature prominently in many of his subsequent compositions. The sketches for Metastasis are also remarkable for their prefiguration of Xenakis’ most revered architectural achievement – the Philips Pavilion at the Brussels World’s Fair in 1958. Constructed only five years after his first use of the paraboloid on paper, the images of the tri-conoid pavilion – site of Edgard Varèse’s famed Poème électronique – are a startling concretization of the composer’s sonic experiments or, as Xenakis scholar Ivan Hewett indicates, the ability of architecture to appear as frozen music.

Drafts for a 1955–6 composition, Pithoprakta, reveal not only a mathematician and musician but an amateur physicist and naturalist as well. Unlike Metastasis – which, despite its iconoclastic technique, remains an essentially geometric, and thus ‘linear’, work – Pithoprakta eschews the line and the point for ‘clouds’ and ‘clusters’, terminology usually deployed by practitioners of quantum mechanics. Pithoprakta and 1965’s Terretektorh include sketches of these clusters drawn with the same eye that had spatialized the indeterminate ‘electron cloud’ in the contemporary model of the atom.

This turn toward patterns of intensity rather than enumeration indicates what Hewett calls a ‘monist approach’ in Xenakis. The animal kingdom, folk music and Greek mythology, all extremely influential during his childhood in Spetsai, contained pantheistic motifs that would often resonate in his drafting, whether in the mandalas of Terretektorh – used to illustrate configurations of instruments and audience – or the fractal patterns in Diatope (1978). Sinuous, colourful and occasionally ludic, these diagrams appeared in stark relief to Xenakis’ respective musical notations with their obsolescent system of bars and staffs.

The exhibition also featured sketches of Xenakis’ unrealized urban design projects, in which he expanded the volumetric architecture of the Philips Pavilion to vast complexes or entire metropolises. The first, and most ambitious, was entitled Cosmic City (1963), inspired by his observations of Manhattan’s skyline. Described as a ‘garment’ by Xenakis, the city was drawn as a series of paraboloid towers spiraling high into the earth’s atmosphere, each edifice accommodating millions of residents. The Utopian project was a vertical counterpart of sorts to the urban sprawl then beginning to proliferate in the postwar era. Next to most of the detailed musical sketches, the Cosmic City appears protean and speculative – more musing than model. An amended iteration, Cité de la Musique (1984) was designed as an ‘experimental auditorium’ using similar paraboloid configurations but reduced to a single structure. This sketch, miniature and more meticulous by comparison, looks to combine the Roman Coliseum with an intergalactic airship.

Viewed in toto, Xenakis’ drawings provide not only an important historical artefact from one of the century’s seminal composers, but a synaesthetic experience of music’s immersive and tactile possibilities. In all the various lines, curves and planes one can see and hear the profound computerization of sound that would come to define music in the late 20th century.