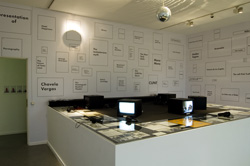 There is a definite thrill that comes from walking into an exhibition, in whatever state of partial or total disarray you happen to be in, letting it unfold in front of you, and realizing with relief that you are being treated with sensitivity and generosity and being encouraged into a discussion, rather than being curatorially or institutionally led by the nose. It is even more gratifying when it is a group exhibition whose subject is as potentially vexed and still crucially important as Feminism – in all its different guises and glories. Don’t you think it’s a great title, life motto and perhaps under-riding ethos: ‘If I can’t dance, I don’t want to be part of your revolution’? I repeated it to a lot of different people and it always produced a smile, even be-fore they knew that it was coined by Lithuanian anarchist, Emma Goldman. Dance is the antithesis of a marching army. And, of course, it implies joy, which Feminist art is often unfairly accused of lacking.

Prior to this show I didn’t know about De Appel’s unique institutional beginnings as a project space, established in 1975 by the female gallerist Wies Smals, specifically for international performance art. ‘If I Can’t Dance...’ drew extensively on the institution’s archives, giving it a satisfying depth of field. And as one of the participating artists pointed out, this clever move allowed the contemporary offerings plenty of freedom from the burden of historicization. The archive material – including documents, catalogues and video-taped performances – was displayed atop a white cube, dubbed the ‘Shadow Cabinet’, in a well-thought-out installation by Stefanie Seibold that also included her text wall covering Reader/Wallpaper (2006). It made the archive an integral part of the exhibition, rather than an impossible-to-access informational add-on. The material on offer included works by Carolee Schneeman, Moniek Toebosch, Martha Wilson, Gina Pane and Joan Jonas. Valie Export’s Raum sehen und Raum hören (Space Seeing and Space Hearing, 1973–4) stood out for its hyper-drollness. This short black and white video shows the artist standing expressionless, hands by her sides, in an empty space. Jump-cut edits and changing camera angles suggest the artist is being teleported – an effect heightened by an electronic soundtrack of synthesizer oscillations.

‘I Can’t Dance…’ was actually the second part of a two-year project encompassing a huge spread of performances, discussions and screenings amongst other events. Not that the exhibition alone wasn’t was enough, especially because of great works such as Frances Stark’s Structures that fit my opening and other parts considered in relation to their whole (2006). If you never see another PowerPoint presentation in your life, you should make an exception for this one: Stark has a way with words and her wry, self-deprecating, journal-like musings on being a lover, mother and artist made me squirm with their honesty. Domestic concerns also played a role in Haegue Yang’s installation Afterimage (2006), which abstractly summoned the memory of the environs of an abandoned family house, and her photography series Gymnastics of the Foldables (2006), depicting a white wire clothes rack in all of its potential rigid, but amusing, shapes.

One of Feminism’s active legacies is the idea that art history needs to be constantly rewritten and redirected. As part of her ensemble of paintings and drawings affixed to free-standing panels, Attestation (What was it before it exploded?) (2006), Jutta Koether made iconoclastic reinterpretations of Gustave Courbet’s The Origin of the World (1866) and Paul Cézanne’s La Femme (The Eternal Feminine) (c. 1876–8). Her deskilled ‘wrong’ style, her penchant for scratchy texts and her matte-black, post-Punk style suggested that, for Koether, traditional skills are still the master’s game – a game she won’t play along with.

Possibly underpinning the inclusion of Karl Holmqvist’s installation Scumbags & Cie (2006), was the notion that Queer theory arguably helped jettison some strands of Feminism from essentialist encampments. Holmqvist revisited the oeuvre of the influential Japanese artist Yayoi Kusama by creating his own version of a couple of her works including a shopping bag with lurid bulbous protrusions (Black Kusama Refugee Bag, 2006). Hung alongside was his Joke Painting (2006) à la Richard Prince – a text on a black background which read, ‘My son could have done that/Well he didn’t’.

‘If I can’t dance…’ avoided overplaying the visceral and ranting aspects commonly (if somewhat unfairly) associated with feminist art, in favour of critical reflection and generating a web
of relationships between the viewer and the artwork. While such an approach might have surprised or disappointed those who would have preferred to see more aggressive feminist stances (or more body parts), it was precisely this that prevented the show from being predictable, too easily pigeonholed or dogmatic.