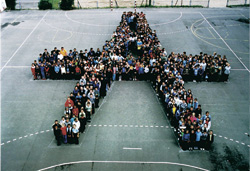 Illegal graffiti has long been erased from London’s revamped South Bank promenade; if any is to be found, it is likely to be of the officially sanctioned kind, created by erstwhile pranksters turned aspiring art stars. So the appearance of an unimaginatively composed ‘PAT WOZ ERE’ on a wall outside Tate Modern seemed a little incongruous. Pat, like hundreds of other visitors that day, had taken part in a performance by Polish artist Ewa Partum, staged in Tate’s Turbine Hall as part of a day-long series of events exploring artists’ use of language and text as sculptural material. Partum first performed Active Poetry in 1971, cutting up a page from James Joyce’s Ulysses (1922) and scattering the individual letters throughout one of Warsaw’s pedestrian arcades. In the Turbine Hall, as screaming children and overexcited adults braved Carsten Höller’s playground of vertiginous slides, Partum re-enacted the piece, re-titled as Visual Poetry (2006), by sending hundreds of white paper letters cascading down from the first-floor balcony, leaving to chance (and visitors’ literary talents) the form of words and phrases on the concrete below.

A 1973 film version of Active Poetry was also included in a screening of Polish film and video curated by Lukasz Ronduda and Michal Wolinski. Opening with Paulina Olowska’s painfully cool Welcome to the Exhibition (2005), a homage to Karel Teige’s 1923 Alphabet in which Olowska uses her own body to spell out the title of the work, ‘Image/Text’ was a tightly conceived programme with some little-known gems, among them Wilhelm Sasnal’s playful choreographies, Pawel Kwiek’s deconstruction of cinematic conventions and Humbug, made in the 1960s by the amateur film club Amatorksi Klub Filmowy IKS Mikolow, which seamlessly melded mocking critique of Poland’s communist regime with an almost childlike visual humour.

The latter part of the day boasted appearances by Carl Andre and Martin Creed. Andre, dressed in his customary railway-worker blue shirt and dungarees, read a selection of his poetry from the past 50 years. Ranging from single-word poems to eloquent exegeses of the work of Hart Crane and Arshile Gorky, much of Andre’s poetry is terse and aggressive with a stream-of-conscious breathlessness that masks the consistency of its supporting structure. Its insistent repetitions readily conjured the pared-down seriality of his sculpture, yet Andre was quick to dismiss any equivalence between the two, comparing poetry to ‘the experience of smelling the fragrance of a melon’ and sculpture to the experience of ‘hefting’ one.

Creed and his band pulled out all the stops for a new performance, which was something of a ‘Best Of’: a selection of songs and bursts of characteristic self-deprecating humour were interspersed with carefully choreographed sequences of door-slamming, auditorium lights flashing on and off, and assistants mirroring his movements on stage. Creed also took the opportunity to screen his newly completed ‘sick’ and ‘piss’ films, acts he’d clearly felt unable to evoke with words but which left the squeamish among us wishing he’d at least given it a go.