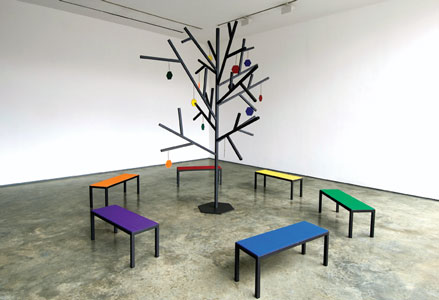 There is a curious paradox sometimes encountered in artworks concerned with community. Often trading under the ragged banner of ‘relational aesthetics’, or the more common abbreviation ‘relational’ – a term now so denuded of specific meaning as to already be experiencing its own Mannerist twilight – they seem to reduce the very base units of their subject, people, to mere ciphers of ‘the social’ (always with a definitive article, as if it was an object ‘out there’; detached and distinct, to be looked at but not touched). People, after all, are far easier to get a handle on if viewed as bit-part actors jumping through hoops to illustrate some theory of Utopian failure or pop-cultural mythopoeia, rather than as the difficult, fascinating beings we actually are. That ‘Imagine Action’ took this messy gap between individuals and their social realm as its subject was thus to be welcomed. Curated by Emily Pethick, the show navigated its way through complex, murky waters of its subject with an intelligence and delicacy that was subtle almost to a fault.

Taking its title from Luca Frei’s exhibition ‘To Imagine Action’, which featured a peculiar schematic sculpture, also included here, of a tree surrounded by benches (Untitled, 2004), Pethick’s ‘Imagine Action’ reflected upon the public sphere, and how knowledge and community is shaped and structured by individual agency. The show hinged around Frei’s diagrammatic meeting area – a kind of displaced town square which, in the context of the Lisson, emphasized the ambiguities of a private commercial space open to public viewing – and a video of Dan Graham’s mesmerizing Performance/Audience/Mirror, first performed at De Appel, Amsterdam, in 1975. Graham stands before a small audience seated on the floor, his back to a large mirror which covers the entire rear wall, and in which the audience can see their reflection. As the crowd shuffles or fidgets, Graham describes these movements back to them, making the audience even more aware of their own tics and reactions – a feedback loop creating an extreme sense of self-consciousness. It was between Frei’s arboreal public/private space and Graham’s sensitization of personal behaviour that the other works in ‘Imagine Action’ operated – a heightened idea of ‘me’ as it might relate to ‘you’.

Falke Pisano’s two-channel video Chillida (Forms and Feelings) (2006) presents images of public sculpture by the Basque artist Eduardo Chillida – black and white documentary photographs of large abstract monuments in municipal parks and plazas. As the cycle of images unfolds, a deadpan female voice discusses the ways the sculptures make her feel, the thoughts they provoke, and the ideologies they embody. If at points the flat voiceover sounded almost comically serious, Pisano's video nevertheless intelligently describes the shortfall between an cultural worker's idealized notions of the public, and realities of having to live with their visions once built. This idea was also echoed in Pia Rönicke’s Model For a Cinema (2007). Three separate films played within a tabletop architectural macquette; Zonen (Zones, 2005), a visit by three architects to the site of a new town they are involved in planning; Cell City, A System of Errors (2003), an animation of perpetually mutating modular forms, and The Life of the Schindler House (2002), which described life in Rudolf Schindler's famous Los Angeles building – it leaks, it’s too hot in summer and freezing in winter. In some ways, the film argues, it exists only on its own terms as a study in space and form yet in other aspects allows its inhabitants space and privacy. At a more abstract level, Gareth Jones’ Untitled Structures – a square wooden spiral nailed to the floor and a hollow, brick sculpture (2003 and 2005, respectively) – exist purely on their own terms too; at a liminal point on the edge of association (household bricks, for instance) and mute formalism. In Judith Hopf and Deborah Schamoni’s hilarious video Hospital Bone Dance (2006), bruised and bandaged patients shimmy their way around hospital corridors to the bemusement of the nurses; a community brought together by physical illness transforming the world of the institution they’re stuck within, rather than the other way around.

Although enlivened by series of events throughout the show’s run – including a screening by the Otolith Group and performances by Frei, Pisano, Melanie Gilligan and Ricardo Basbaum – ‘Imagine Action’ was, in places, a little too opaque. According to the gallery handout, Florian Pumhösl’s series of paintings on glass (‘Modernology’, 2007) ‘contain graphic, painterly and architectonic motifs from Japanese Modernism that show a visible exchange between the German, Russian and Japanese avant-gardes between the wars’, yet their exquisitely minimal graphics allowed no point of entry beyond their preciously reductive surfaces. Henriette Heise’s video A Room of One’s Own (Enjoy Your Symptom), Part II (2002), in which fuzzy images of coloured circles cut from magazines are moved around a tabletop, was simply solipsistic. Yet blankness was, in other places, a strength, in particular Haegue Yang’s Relational Irrelevance (Utrecht Version) (2006) – a floor lamp, spotlit by a stage light set on a timer – could be taken as a perfect allegorical illustration of the show’s theme; that the outside forces shaping our behaviour are often just other people's perspectives.