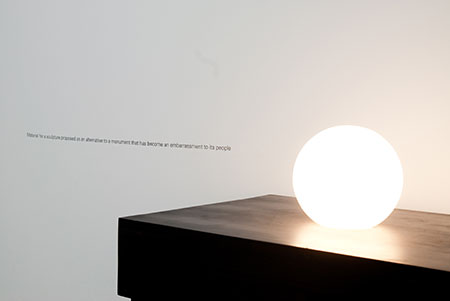 Iman Issa’s exhibition, ‘Material’, developed a critical position around monuments quite different to that of the ‘anti-monument’. Anti-monuments, after all, are now part of the mainstream. The British public, for example, not only instantly understood the critical thrust of the unassuming, feminized, interactive aspects of the Diana, Princess of Wales Memorial Fountain (2004) in London’s Hyde Park, but also grasped the failures of that criticality. Monument and anti-monument have a complementary relationship that completes a circle and constitutes the expansion of the language of each. Issa maintains her parallel relationship to this language by producing ‘material for’ sculptures that might address the failings of, or apply alternative possibilities for, existing monuments.

In ‘Material’, the wall texts acted both as titles and as key components of the works, giving you no specifics about the original monument’s location or cultural specificity. Instead they might refer directly to a monument (as with Material for a sculpture recalling the destruction of a prominent public monument in the name of national resistance); or a replacement for a failed monument (as with Material for a sculpture proposed as an alternative to a monument that has become an embarrassment to its people, both 2010). The materials accompanying the texts were readable as maquettes or sculptures but, thanks to the texts, not heavily committed to either status. This allowed the ‘materials’ to occupy precisely the opposite status of a monument itself, which is overdetermined with declarative purpose, recognition and interpretability.

Nevertheless, they clearly evidenced attention to the formal tactics of memorialization. Material for a sculpture recalling…, for example, worked well as a pretty close description of bathos: a polished wooden slat ascended at a near-45-degree angle, supported by another vertical slat with a long, black, drooping tassel fastened to its top end – the tassel was full of pomp but lacked the rigidity and inclination that the wooden structure suggested. As it happens, the monuments to which ‘Material’ referred are real objects with real histories that Issa relates to closely, but which she has chosen not to locate or describe. The viewer’s dependence on the textual clues and physical ‘materials for’ provoked a process of identification that opens up relationality between elements (and between those elements and ourselves) rather than symbolism. Rather than invoking the monument itself, with all its distracting biographical and political specificities, Issa cuts straight to the questions of how physical forms are leveraged in the production of recognition, identification, sentiment and familiarity.

As a bass throb came from a speaker in the wall, and a second speaker started emitting sounds reminiscent of rippling papers growing into the roar of a distant crowd, I felt a certain interpellation of experience corresponding to the title of Material for a sculpture acting as a testament to both a nation’s pioneering development and continuing decline (2011). It’s up to the listener to decide what is the decline and what is the development – either sound could refer to either condition. I couldn’t help but be reminded of my experience of the days in Cairo following the resignation of Hosni Mubarak, when, even when the streets were normal, the buildings still seemed to resound with a sort of seashell crowd-roar. I know this piece was not about that, but that is the point: being reminded of the sound has more force than the handy naming of a specific revolutionary event itself, which in the context of a review already feels like a trite, reductive thing to do. In the same way a tuning fork can be struck on any surface, the effect is nonspecific but absolutely true, and if this is how Issa wishes to operate then she has more faith in the tactics (if not the specifics) of the monument than one might first assume. Given that I’m currently resistant to acts of monumentalization, a piece such as Issa’s seems far more powerful.