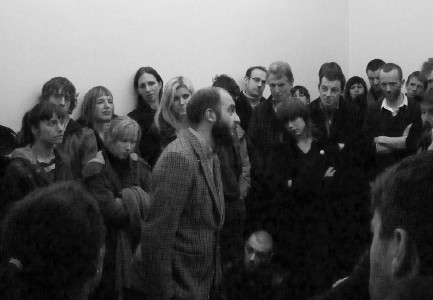 What do wild mushrooms, Zen Buddhism and Arnold Schoenberg have in common? Gallery-goers were given the chance to ponder this question at the enjoyable inaugural performance of Jan Mot’s new monthly event series on ‘Oral Culture’. John Cage’s ‘Indeterminacy’ marked the debut of the programme, coinciding with the 50th anniversary of the piece, which was first performed at the Brussels World’s Fair in 1958. The idea behind the work was suggested to Cage by David Tudor, who proposed he give a ‘talk that would be nothing but stories’. ‘Indeterminacy’ is composed of a collection of anecdotes, jokes and brief meditations reflecting Cage’s habitual obsessions (see above) and his sometimes zany personal life: his crossing of the Dutch border backwards with Merce Cunningham, for instance, or his plan to teach a class on mushroom identification at the New School for Social Research. (The president reportedly replied: ‘Fine idea. Nothing more than mushroom identification develops the powers of observation.’)

The stories are delivered at the rate of one per minute, no matter what their length, giving the piece a halting, musical rhythm; many of the shorter texts had the incantatory ring of a haiku poem. Artist and graphic designer Will Holder, who has himself devoted considerable thought to verbal performance or ‘speech as publishing’ in his ‘An attempt to evolve’ lecture series (2005–present), kept the packed audience captivated with his articulate recitation and easy demeanour.

The piece was intended to be accompanied by music (though the original Brussels performance was without), and this time Cage’s words were set against strains from Manon de Boer’s film Attica (2007), based on the composition of the same name by Frederic Rzewski, emanating from the adjacent room. Cage would have no doubt appreciated the political reference of De Boer’s piece to the 1971 Attica prison revolt and its brutal suppression.

One of the shorter anecdotes inspired muted chuckles in the crowd while providing a kind of motto for the piece as a whole: ‘In Zen they say: “If something is boring after two minutes, try it for four. If still boring, try it for eight, 16, 32 and so on.” Eventually one discovers that it’s not boring at all but very interesting.’ The interest in the meandering yet precisely composed tales of ‘Indeterminacy’ lies in the question it raises about lecture as an art form: neither a simple vehicle of communication nor an exercise in rhetoric, but not exactly a poetry recital either. With the success of this first performance, ‘Oral Culture’ promises to provide a forum to discover the potentials of one of the most evanescent and ‘dematerialized’ materials in the Conceptual artist’s arsenal, exploring that grey area between language and object, performance and visual art.