BY Diedrich Diederichsen in Reviews | 17 MAR 06 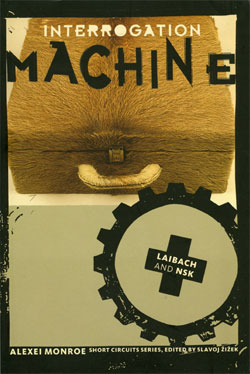 The main strength of Alexei Monroe’s book on the history of the band Laibach and the associated artists’ collective Neue Slowenische Kunst (New Slovenian Art, or NSK) is his account of the years around 1990 – the alleged ‘end of ideologies’ era. The Slovenian artists, well prepared by their activities during the 1980s (when Slovenia was part of Yugoslavia), exposed this ‘end’ as a myth, employing theatrical exaggeration instead of merely approaching it with the old critical appeal to reason. Using local nationalist or universal fascist and totalitarian aesthetics, and recording bombastic militarist versions of songs by pop ‘totalitarians’ like the Beatles, Europe or Queen, made people speculate: which side were they on?

There has been a common attitude amongst critics that it would be too easy, and unjust, to understand Laibach and NSK simply as a more ‘advanced’ version of the old critical tradition. This, though, could be seen as their achievement, and nothing to shy away from. Monroe, however, seems extremely shy, and there are few sentences I agree with less than this one from the book’s introduction: ‘Brutal demystifications of complex artistic phenomena are as much to be avoided as wholly uncritical mystification.’ This statement supposedly defends the right to enjoy ‘art that moves, confuses, agitates, or fascinates’ by proposing a middle way; 50 per cent mystification, 50 per cent brutal clarification? (Why is brutality the opposite of mystification?) It suggests that only the absence of understanding and analysis can facilitate the enjoyment of complexity. However, this view confuses complexity with a pleasant sense of impenetrability, with the false evocation of the Sublime through feigned stupidity. Enjoyment, or even just the perception of complexity, depends on an understanding of structures that cannot be grasped in a state of mystical awe.

And sadly, the term ‘complex’ is a frequent escape route in this book (about which I otherwise have decidedly fewer reservations than its methodology might lead one to suspect). Often, at the most interesting point, Monroe simply proclaims an issue complex, instead of describing whatever it is that is complex about it. In much the same way, when assessing the entanglements of ideology (including the analysis of its repressions, its other side) and the fascination exerted by its artistic representation through Laibach and NSK, the author often applies an intellectual handbrake by talking of the ‘positive’ or ‘negative’ effects of their music and art – without explicitly tying this assessment to the kind of political judgement that would be apparent in a ‘right’ and ‘left’ scheme. This is mostly avoided, however, although it does shine through as a subtext. As well it might, for what Monroe undertakes is an attempt to describe an artistic project based on the reception and criticism of ideology that was unprecedented in its determination. An art that pursues a critique of ideology should not be confused with, or judged as, a critique of ideology minus the art. The fact that such an art can be analytically ‘worked through’ – a pet term of Freudians and also Monroe – is demonstrated with great exactitude by the author himself.

Monroe’s patient uncovering of Slovenia’s underground and its discursive traditions is both commendable and brilliant, as it gives the all-important background to the history of NSK and Laibach. One only wishes a similar amount of space had been given to the group’s reception in a world supposedly free of ideology: a phenomenon such as the vulgar version of Laibach that is the ‘scary’ (East) German band Rammstein would have fitted in well.