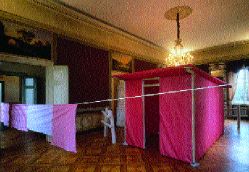 Being friends isn't always easy, especially in intensely close-knit milieus. The unique conditions that pervaded Cologne during the last decade may now have passed, but Cosima von Bonin, along with Kai Althoff (with whom she has had many fruitful collaborations) was something of a key artistic persona in that vivarium. It was a time when music, art and print media engaged in some healthy cross pollination and mutual admiration; a cultural landscape born of late night bacchanals that turned mornings into extensions of yesterday. The way von Bonin constantly invites the participation of others, or references them, is an attempt to say that everything we have in the way of cultural wealth is, or ought to be, shared property. Accordingly, the people and events that surround the making and opening of exhibitions, producing a video, a record or cover design, or attending a club, are not distractions from the demanding activity of producing and exhibiting art, but a determining feature of it.

An example: von Bonin responded to an invitation to exhibit in the Stadt Forum Park, Graz, by organising Das 1. Grazer Fächerfest (The First Graz Fan Festival, 1995). The programme - more of an in-house Cologne culture camp - featured sculpture and drawing, a theatre piece, DJs, bands formed specially for the festival (Cocotex and The Kitchen Help), and film screenings, including Fassbinder's Die Bitteren Tränen der Petra von Kant (The Bitter Tears of Petra von Kant, 1972). In the same year, at Martin Kippenberger's Museum of Modern Art in Syros, she staged Benefit Lunch (1995) - a plein-air meal at which the distinguished guests were invited to thread spaghetti through macaroni. These edible works were then boiled and consumed. Despite the ephemeral nature of such ventures, they bore von Bonin's hallmark: a carefully nurtured DIY ethos. Back in 1991, she made a similar gesture at Andrea Rosen Gallery, New York, where, rather than her own work she exhibited that of her friends. Of the ...Fan Festival, she said: 'instead of showing just one segment of a fan [I wanted] to bring along the whole beautiful fan'. (The apposite pun on 'fan' is peculiar to the English translation - the idea was adopted from a friend's accessories for a Christopher Street Day parade).

The first piece to greet the eye at 'Cousins', von Bonin's latest, and most extensive, exhibition at the newly invigorated Kunstverein Braunschweig, was another artist's work: Nils Norman's The Gerrard Winstanley Radical Gardening Space Reclamation Mobile Field Center and Weather Station (European Chapter) (2000). It is a solar and human-powered push cart filled with books on alternative energy and environmentally sound gardening - perfect for a seed-sowing wanderer with a mission. While the exhibition's title initially suggests an emphasis on relatedness and involvement, as a whole it reflects a readiness on the part of von Bonin to go it alone, even though her work remains full of references to people and shared histories. Perhaps it's proper to consider her most recent pieces as a group of personalised, imaginative reconciliations, forged under the pressure of an idiosyncratic set of group dynamics. The first work by von Bonin in 'Cousins', 1980 Dickinson College - New Student Orientation (2000), is somehow deeply anti-fraternal, despite its campus-like name. It's a kind of wicker coop, a small cell of tightly woven Salix Americana. Its door is wired shut so that the space inside, though visible, remains beyond reach, suggestive of the need for a fragile, relocateable retreat. It also reminded me of the fiery climax of The Wicker Man (1973), in which a wicker sculpture was put to a different use - as the container for a human sacrifice by pagan islanders.

What followed was a series of rooms (from white-washed private chambers to a semi-intact salon) housing von Bonin's sculptures, wall hangings and prints. While much of her previous work might be seen as a present-day version of the kind of activities Watteau depicted in his Fêtes Galantes, 'Cousins' had more the spirit of an ardent admirer of international contemporary hobby crafts. Her glued, sewn, and assembled objects manifest an attitude towards installation predicated on forming the least permanent bonds possible with the space in which they are exhibited.

Ohne Titel (2000), a collaboration with Björn Geipel, for example, is a horizontal banner of red gingham dangling on a length of white nylon rope. It ran from one space to another, simultaneously a room divider and improvised washing-line in the right place at the wrong time. Showing on a monitor opposite was Pryde: Exigencies (1999) - a video which features music and lead vocals by Justus Köhncke and lyrics by David Grubbs. The video contains a pirated television documentary about a little girl living in the Canadian countryside with a team of racing huskies. Although appropriated in its entirety, it looks like a perfect von Bonin world: the heroine with her rough mullet haircut and crooked fringe; huts and makeshift structures scattered around a farm; nice knits; and winter woods. Its a world where innocence and a slightly post-apocalyptic atmosphere somehow coexist.

Von Bonin's friendships and shared histories, taste and escapades inflect many works. Take Carina Herring, Rosemarie Henschke, Merlin Carpenter, Josef Strau, Josephine Pryde, Karola Grässlin, Thomas Müller, Isabelle Graw, Diedrich Diederichsen, Bernd Witzgall (2000) for example - personalities transfigured into a maze of cartoon-like, horse-hitching rails, made from foam and upholstered in fabric from Laura Ashley's 1999 collection. In von Bonin's hands, Laura Ashley looks hip. The work implies that friends are gentle creatures that must be negotiated carefully. Fabrics and patterns, sewn and stitched wool, velvet, felt, handkerchiefs and silk are von Bonin's indispensable materials. One of her favourite strategies is to mix and match compositional canons of Modern-ism with materials and methods from the traditionally female heritage of what are lovingly referred to as the 'lap' arts. The works that emerge from this partly reverent, partly iconoclastic activity leave you perched semi-comfortably on a discursive fence. For Blazon of a Hashcountry (Country #6 - #9) (1999), a series of hanging banners made from grey, woollen material (Anatolian winter head scarves from an Istanbul bazaar), had been converted into grey landscapes through rudimentary embroidery - huddles of houses outlined in white thread. Drunkard's Path (2000), likewise, is based on an American quilt design of the same name, but transformed into a suspended wooden grid with printed Perspex panels, and fitted with a disco mirror ball motor that gently shakes it.

A cultivated affinity for the makeshift, the beauty of happenstance, the seemingly spontaneous and the pragmatically crafted are the hallmarks of von Bonin's work. She likes to play up to the - hopefully - fertile imaginations of others. In 'Cousins', the idea of a house or a shelter as a refuge for the imagination appeared in many works.

A door-less hut, Little Door Slides Back (2000), looks like a newly built, yet abandoned, shanty, and is based on gypsy dwellings, from which von Bonin adopted the idea of walls made of decorative paper and plastic. Flapping in the wind above the main entrance of 'Cousins' was another banner made from red gingham, Laura Ashley (2000), while below, von Bonin had planted bunches of daffodils in the urns flanking either side of the entrance steps. After the opening, everyone retired to the back garden, via a path of stepping stones set into sodden grass, to a white wind-buffeted marquee.

Being introduced to von Bonin's work is like receiving the keys to a communal garden that she has been tending for years. Her gregarious artistic activities always seem to start from a premise which privileges the social and the collaborative; subjective visions rather than end products. That's not to say that she has banished the art object from her diverse practice - on the contrary. Von Bonin reflects upon herself, and, on principle, declares that she is not an island but a social archipelago.