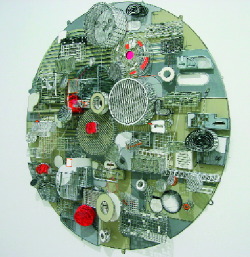 You are trapped in a locked, windowless room. There's a thick-necked guard outside and the clock's ticking on your mission to save the world. How do you escape? If your unfortunate predicament has come about in any one of a thousand made-for-TV movies, the answer is a no-brainer: prise off the air-conditioning vent and you're away, released into a system of hidden tunnels that will also, conveniently, allow you a discreet vantage point on your captors. Jane South's Untitled (Horizontal Strip) (all works 2004) is bookended by what looks like a pair of these handy alternative exits, small circular portals leading who knows where, redolent of risk and adventure. The 14 metres or so of wall between them is taken up by a quiet riot of cut and folded paper that draws on Diana Cooper, Heath Robinson and selective research into the basics of structural engineering, conjuring up a precarious world of balance and counterbalance.

Like a game of Mousetrap extended to epic proportions, Untitled (Horizontal Strip) requires us to negotiate a set of delicately interconnected structures seemingly poised on the brink of collapse. South employs a vocabulary of quasi-architectural and industrial forms that includes - in addition to the aforementioned vents - handles, bars, levers, cages, cables, pools, shafts, hooks, reels, platforms, towers and scaffolds. Glued, taped and pinned together, these evoke prototypical designs for particle accelerators and washing machines, Le Corbusier one-offs and cookie-cutter car parks. Having manufactured a few thousand minutely detailed individual components using little more than a craft knife, a ruler and apparently limitless patience, the artist then combines and recombines them in a semi-improvised process of construction, demolition and restoration. A series of simple geometrical shapes, painted on the wall like printed circuitry, anchor and articulate these building blocks and turn a sequence of forms inspired by welded steel girders into a weightless glissando run.

Untitled (Vertical Shaft) also invites a musical analogy, its column of dangling cylinders suggesting notation and its measured palette of rich burgundy and dusky pink turning it into something of a tone poem. As before, South marks the visible surface of each component part with emphatic outlines and cross-hatching. Suggesting a desire to create the illusion of solidity, these finally announce its opposite, revealing the whole enterprise as fleeting and unfulfillable. Shadows cast by the hard lighting further confuse second and third dimensions. Untitled (Circle) is a denser arrangement. Two metres across, its encrusted surface recalls those monolithic miniature spacecraft modelled from bottle tops and cotton reels by pre-digital SFX pioneers. Primarily grey and beige, black and white, it is spotted with fluorescent red and orange. The effect is stylish, oddly tasteful in spite of the cartoonish forms and artificial colour. This is art with the look of design about it, and it contains all the pleasures and problems that that term implies.

Resting on the floor are Untitled (Small Oblong Construction), Untitled (Large Circle Construction) and Untitled (Circular Grouping). In these free-standing paper sculptures South presents a series of variations on one of her favourite forms - a slatted drum that looks a little like a hamster wheel - on an uncharacteristically large scale. (In fact, the biggest of these is less than a metre across, but in the context of the intricate wall installations they look almost grotesquely inflated.) This is a worthwhile experiment, successfully upsetting our expectation that the medium and technique must be limited by the dimensions of a desktop cutting mat. It also makes for some entertaining optical effects, as the works' Doppler shimmer follows us around the room.

A series of smaller, discrete constructions ranged around the walls of the rear gallery make use of forms with which we are by now familiar and which are instead distinguished primarily by their colour schemes. These range from bright green to powder blue and pale orange. South's project is always a playful one, but here the combination of executive toy scale and cheerful hue threatens to allow mere cuteness to become its defining characteristic. Any artist making work so immediately appealing and possessed of a decorative slant needs to watch his or her back for the stealthy approach of cynicism and self-parody. Perhaps the reference to a traditional painterly format in the rectangular landscape proportions of Untitled (Yellow Panel), represents an attempt to get serious by forging an historical connection? South is clearly having fun and her enjoyment is infectious, but her chosen methodology could become a trap. Good thing she knows where those vents are.