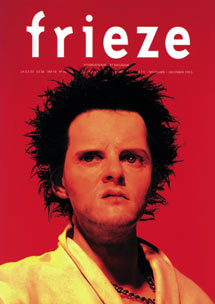 Every season an artist comes to town with bells on. One can hear the ring-a-ling jangle in the footsteps of an admiring consultant, critic or collector as they traipse, like Salvation Army Santas, through SoHo proclaiming the birth of the latest Christ child. This September a young man named Jason Rhoades was tapped. Like any crown of hype, this one intends to distort what we see, making it more or less, but rarely what it truly is.

Jason Rhoades’ first one-man shoe is an installation called Cherry Makita – Honest Engine Work. He has turned the gallery into an in-progress construction of what could be either a mechanic’s shop or a home hobbyist’s refuge. The room is filled to the brim with an assortment of found and made objects. Dusty work clothes are neatly folded amidst heaps of mutated assemblages. A rocking hoarse sports a tumourous growth of foil, wire and tape. Some objects are obviously fakes: a flimsy cardboard rabbit hutch or a paper microwave which pretends to heat a lump of his signature tin foil. Pin-up girl calendars attest to the realness of the endeavour, as do unused paper signs which spell out the show’s title in Letterset.
In the centre of the room a half-built structure raised on beams sits like a funeral pyre. This is the heart, the house of the fantastical ‘Cherry Makita’. Here sits the brain child of Jason Rhoads. Here is the big boy. The ‘Cherry Makita’ is a hand drill powered by a Chevy 350 engine (a respectable member of the small block family found in later model corvettes – not as beefy as the old 427’s but more economical). ‘Cherry’ is outdated automotive slang for a car in pristine and original shape. It was and is also used to describe a woman in similar condition. Untouched, undriven and pure. Thus, the ‘Cherry Makita’ is actually a virgin borer. (Note that while we tend to associate the term ‘virgin’ with the female, an alternative reading might suggest that Rhoades is referring to loss of male virginity via anal penetration.) So, as we often do, we are talking about the accoladed giant penis, so bloated with power that it perches in an immovable state.

One has to be a pretty vigilant fan of ‘scatter’ art to appreciate the objecthood of Rhoades’ pieces. They are not particularly attractive or desirable and apart or en mase have little power to sir the soul. He seems intent in positing his work within the all too tedious discourse of ‘What is art?’ It is overbearingly apparent that the carelessness with which his objects are made is intentional. He puts time, but no love into this project, as though it’s a bitter enemy from whom he can’t stay away. One senses an obsessional urge on his part as he revisits the site, keeps adding to it, breeding shoddy bits and pieces to fill every bit of the space.

The psycho-drama of Cherry Makita… is ultimately more fascinating than its physical presence. A key to understanding the binary behind this hodge-podge ode to manliness is the piece Descriptive Schematic for Cherry Makita – Honest Engine Work. In this relatively small drawing Rhoades maintains a less celebratory tune. This chart made of ink and motor oil on foam core is a time line that traces possible outcomes from the notation ‘Boy’s first Makita (drill)’. Here the scale is not so grand, the outcome not so grandiose. Rhoades’ Schematic records the failed expectations of the boy mechanic, the magic fixer-upper. The man who inhabits the land of Cherry Makita… is not fulfilled, not as powerful as his tool, He is also as much a caricature as the idealised embodiment of machismo that is alluded to in the installations.

Jason Rhoades comes dangerously close to dismantling the notion of the ‘heroic’, but like many male artists he is unable to sever ties with the ‘power source’, to make a break from the secret society of male bonding. He pokes at it and hints around it, but a cynicism or hesitancy prevents him from critiquing it head-on. Much male-made art that endeavours an unpacking of masculinity falls short. These efforts are often paradoxically ensconced in over-gesticulated attempts to mask th broken image that is its outcome. For all th poundage of work in this show, Rhoades only delivers halfway. Cherry Makita… is a study of failed expectations masquerading as a shrine. For only a man’s vision of failure would represent itself as so monumental. Rhoades’ inability to openly confront the collapsed mythology he details in his Schematic results in a semi-closeted communiqué. It is the difference between a powerful first show and a mere show of bravado.

Collier Schorr is an artist and photographer based in New York, USA.