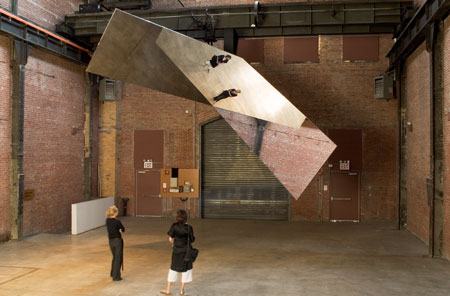 Putting aside for a moment searing insights into matters of optics and the symbolism of reflections, I was simply glad that I’d had a wash and brushed my hair when I arrived in front of 360º Illusion (2007), the giant pinwheeling mirror that was the focus of the Sculpture Center’s Jeppe Hein show. Hein created it by joining together, at right angles, two 5 x 2 metre Mylar-covered panels, fixing them to a motor and bolting the contraption to the rafters of the old trolley repair shed that houses the Center, where it spun slowly like shiny sails on a windmill. It was a simple idea with complex effects: the right-angle construction of the panels creates a redoubling of the reflection, so that there appears to be a smaller set of two, shifting reflective planes set within the larger reflective panels. The reflections that seem to alight on the ‘interior’ planes tend to be those of the concrete floor and the white-painted wall at the back of the gallery; so if you stand in front of the sculpture, your reflection will wheel around on the ‘interior’ planes (during the greater part of one revolution), while the roof-struts and exposed brickwork of the building will be revealed on the outer rims of the sails.

It may only highlight my own shortcomings as a pedantic scholar, but 360º Illusion prompted me to no great ponderings on optics. Instead, what seemed significant was the fact that I felt flattered. This was not so much because the mirrors themselves are flattering as because they behave rather like a film camera employed in a big-budget documentary: sometimes they wheel grandly around the presenter, at other times they become the surrogate eyes of the presenter, shooting off to reveal things hitherto hidden. Thus in the gallery, while I stood at the centre of what felt like an arcing boom shot, delivered on the ‘interior’ planes of the mirrors, the outer rims of the mirrors made me optical master of all the hidden corners of the roof. This may sound like a pale mastery, but the Sculpture Center is housed in an industrial ruin, and, like many such recovered and gentrified sites, it can deliver the faintly discernible – if entirely groundless – pleasure of looking back on the past from the position of historical vanquisher (from the ashes of manual labour arises the work-shy critic!). 360º Illusion only magnifies and aggrandizes that enjoyment. Of course, the sculpture could be installed in many other places, where it would create other kinds of meaning – I hope it is – but even so, it’s likely that those meanings will still be trumped by the simple, visually beguiling pleasures that it delivers as a kind of fairground attraction.

I felt rather queasy after all this and decided I’d probably had quite enough fun for one day, but more awaited. Outside in the sculpture court, on a little strip of gravel usually reserved for less interactive objects, were a series of Hein’s dysfunctional benches: Modified Social Bench C (2007) is entirely circular, with the seating beyond easy reach on the inside; the seat of Modified Social Bench A (2006) is jacked up on a hydraulic spring and needs to be pushed down if you are to seat yourself. The functional surface of Modified Social Bench E (2006) looks as though it has melted and drooped onto the ground. Finally, bringing fun to the general public, Hein installed Modified Social Bench I (2006) outside the old Queens County Court House nearby: the legs on this one appear to have grown and tipped the bench over on its head, so that the anyone who wants to sit down must sit on what ought to be its underside.

All these seating arrangements provided a very jolly bouleversement, and they’re successful in that sense, but one suspects they are intended to go further, which they don’t quite manage. Benches are somewhat humdrum items of street furniture with an uneven history of contemporary artists fiddling with them, and they are a lot less interesting as social spaces – less contested, at least – than furniture such as phone booths, which appear to have little purpose these days other than to collect litter and generate advertising revenue. Similarly, 360º Illusion is entertaining but obviously aims to be something more. Hein has set foot on a tightrope strung, it seems, between the need to complicate public space and the desire to entertain the public; he can’t be expected to stay aloft at all times.