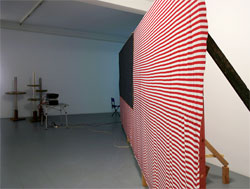 The show’s press release for ‘Entropy for Sale’ was pulled from circulation some time between the opening and the day I visited. I didn’t know that at the time, or that it would make the gallery assistant uncomfortable when I asked for one. After all, I knew there had been one. I had seen, and quickly read, a copy lying around the apartment of friends who had visited the gallery before me. Its text, written by Joe Scanlan himself, was an incendiary critique of the USA and its fascination with decline and destruction. Even Robert Smithson, America’s patron saint of the postwar avant-garde, was described as succumbing to the system. Like America’s response to Saddam Hussein, the World Trade Center and stock prices, Scanlan concluded, Smithson’s ‘Nonsites’ (1968) exploited things that fall. And that’s what I wanted to read about.

One can only speculate about why the text was pulled, whether it was for its overtly political and anti-American tone or other reasons. But either way, Scanlan’s lines – such as ‘Capitalism is the only system that predetermines destruction in order to profit from the need for new goods. This is America in a nutshell’ – hit a nerve, and seem hardly out of character. In the light of persistent threads connecting his engaged art criticism, manifestos, artist-published magazine Commerce, patented invention of post-consumer recycled dirt, role as curator (organizing group shows such as his recent ‘Buy American!’) or role as salesman in his very own product store, the press release seemed a logical step in the polymath’s vociferous brand of folk activism. And, as with so much of what he does, the reference point was America, its symbols and its most deep-seated (often economic) perversions, which in the process model the artist on that extinct American species incarnated by Benjamin Franklin: the inventor as economist as social critic. One of Scanlan’s earliest works, Nesting Bookcase (the first built in 1989), is a perfect example of this; the series of differently sized shelves could be quickly erected for sturdy shelving, collapsed one into the other to ‘nest’ for compact storage or easily carried, thus ingeniously responding to the artist’s own domestic or financial needs. He went on to make several versions of the unique works disguised as ordinary-looking mass-produced objects, ambiguously blurring product and art work and announcing his interest in questioning capitalist consumption that has pervaded just about everything Scanlan has subsequently done.

This show was no exception. The main gallery space held three differently coloured aluminium bins, their form and scale replicating the ones used by Smithson for his ‘Nonsites’ in the late 1960s. Instead of lava rocks, sand or other proof of the earth’s irremediable decay, Scanlan filled his ‘Fake Nonsites’ (all 2005) with handmade forsythias. These have figured in Scanlan’s work over the years, and each time the ‘flowers’ in inimitable Post-it note yellow and the ‘branches’ bearing the unmistakable coils of unravelled clothes hangers declare that these are objects at once utterly ridiculous and painfully honest: they don’t pretend to be anything but dead, fake and for sale. The exhibition checklist was thus part of how the works worked, and you could tell that Scanlan had written it with the precision of a haiku poet, spelling out all the materials of his artifice (in case you wondered how the hangers were kept in place, a glance at the list included tell-tale ‘hot glue’). Admitting that a fake is a fake (and that it had a price tag) was what the show was all about.

Dominating the back gallery, Empire (2003–5), a more than two-metre-long collage of remnant fabrics and Velcro, constituted the strangest American flag I have ever seen. Scanlan’s star-spangled banner was supported by a crooked structure of wood, dangling cement blocks, wire and duct tape that occupied the space uneasily. A gangly counter to the unfaltering certitude of patriotism, it was also a caustic commentary on the behind-the-scenes mess holding up America’s imperial rule. It was joined by standing metal and cardboard constructions (Circulation Drawings, 2005), drawings of the intricate structural geometry of snowflakes (Where the Huskies Go, 2005) and a collaborative animation and sound piece, shown with its own portable camping table and stool (Peer Pressure, 2005). Each part contributed to a kind of makeshift public space, with a picnic area, snowdrifts and all. But truth be told, I only really had eyes for Empire since its unseemly grandeur imposed itself, as empires are wont to do, on everything around it, demonstrating that counter-monuments inevitably trade at least partly on the logic they denounce.

Thinking again about the press release, I realize that it read more like a rant than the subtle and subversive critique of which Scanlan’s works are so often capable. But you had to forgive him, because in his text (if you were allowed to read it) there was a sense of urgency rarely vocalized in the art world today that would have underscored the show as well.