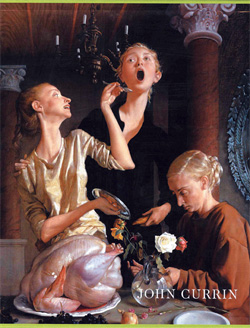 Norman Bryson opens the brilliant, anxious essay he wrote for the lavish new book on John Currin with an admission: ‘When I first saw Currin’s The Cripple, what I sensed was not only the cruelty that lay within the construction of the image, but a nasty stickiness in that cruelty, a way it had of making you connive in its own malevolence.’ He goes on to explain that the ‘figure’s misshapen and twisted body evidently originates with the painter, whose attitude towards the deformation he inflicts seems to include enjoyment.’ Bryson, who positions Currin firmly within the history of caricature, never allows his uneasy fascination for the work of this complex, virtuoso painter to get in the way of his distaste for the paintings often vicious power. The question he consistently returns to is whether the artist – and by asssociation, the viewer – is complicit in this cruelty or whether, as he somewhat ambivalently concludes, Currin is generously opening up ‘a psychic and emotional space inclusive enough […] to suggest what a “full” subjectivity might feel like, even in corrupted times’. Bryson’s response to the often sly misogyny and homophobia of the work is less ambivalent. He writes: ‘Currin’s female figures are viewed through the lens of a male desire that can be active, representing and masterful, only when the feminine appears as passive, represented, and stupid. Degradation is not only the precondition of desire, it becomes its own turn-on.’ Then, as if wondering who else might be a target, he declares: ‘Gays, of course. Currin acts out around the figures of gay men as though he never got beyond the era of the closet: you can tell they’re gay just by looking […] they’re a mess of tell-tale details with only one tale to tell […] his visual construction of the gay male harks back to earlier and (from a homophobic point of view) better times, when stigmatization was the order of the day and you could stigmatize with impunity.’ Phew! I can’t wait for Bryson to write an essay for a painter he doesn’t like!

What Bryson doesn’t address – and with over 300 colour illustrations, this is something the book makes very clear – is how surprisingly tender a painter Currin can be. He paints his wife and child as though he has just kissed them, flowers as if they’ll always bloom and golden curls as if they’re more valuable than diamonds. He can also be excruciatingly funny: leafing through these glossy pages, it dawned on me that much of the satire in Currin’s paintings recalls the dazzling, observational comedy of the 1984 film This is Spinal Tap.

Alison M. Gingeras hooks her essay, ‘Pictor Vulgaris’, around a term employed by art historian Jan Emmens, who argued that the prevailing image of Rembrandt as a rule-breaker was the invention of 17th-century critics, and that Rembrandt – like Currin – was in reality a conformist. Currin, it would seem, concurs, commenting that ‘the mystery lies, I hope, in how conventional my paintings are’. Attempting to reconcile such a comment with the reality of Currin’s paintings of women with deformed, enormous breasts, Gingeras states, rather oddly, that the artist’s depiction of women has less to do with his feelings about women than with his feelings about painting. ‘It dawned on him’, she writes, ‘that by rendering the women’s breasts in the most absurdly “sexist” and anatomically impossible manner, he could “get away from the neutrality associated with figurative painting.”’ Neutrality? Figurative painting? I must have missed something. (Or, as my mother might say, how is it women always end up being the pawn?)

Dave Eggers takes a different tack entirely: his enjoyable contribution to the book comprises 11 short stories, with subjects ranging from weird wives to the commercials of Norway, all of which feel like a satisfyingly apt response to this complicated and imaginative artist. Strangely, the book includes no biography (perhaps the assumption that he is youngish, white, American and male is so evident it doesn’t need spelling out), but Currin is glimpsed through numerous quotes. Maybe one of the most telling is: ‘I have wanted to structure my paintings so that the first, visible layer includes the dopiness of myself and my world. Solemnity is somewhere else, below the surface.’