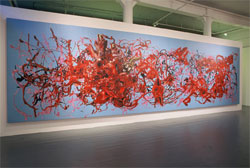 In a self-penned press release John Russell describes his ‘factory aesthetic’ as a ‘display of retinal/conceptual cross-over entertainment and pleasure’, replete with ‘an AMAZING ZERO-CRITICAL CONTENT and NO ADDED AESTHETICS’. Not content with this, he provides us with ‘an added amazing ZERO AUTONOMOUS-ARTWORK-FUTURE-WORLD-PROMISE-DIMENSION and a FABULOUS 0% RELATIONAL-POSSIBLE-UTOPIA’.

We can be pretty sure that he’s not being quite straight, but at the same time the show doesn’t come across as being completely ironic either. Rather, Russell’s mode of address, the ‘attitude’ of the work, is too acutely pitched, and there is far too much going on for it to amount to a one-dimensional instance of pastiche. Here is an invitation to take seriously his refusal to be serious.

The centrepiece of the show is The Philosophy is in the Meat (all works 2005), a gigantic, epic-Cinemascope, high-resolution digital print that looks at first sight as if it might be some kind of parody of a classic, drip-period Jackson Pollock. Looking closer, we see that it is a computerized collage, with one layer of dripped skeins of paint made from images of entrails and offal, and the busiest passage of which depicts a blood-drenched stigmata image of a nailed hand, engulfed by a feeding frenzy of flies. However, all this mock-heroic Romanticism is played off against superimposed, candy-coloured layers of images depicting cake decoration and various other food substances, forming a kind of confectionery spectacle of would-be abjection. What really makes the work take off, is Russell’s ‘gravity-defying’ formal feat of making the surface of the work appear to disembody itself from its support in such a way that it becomes a kind of virtual, but vividly palpable, hovering presence that effectively energizes the whole space.

It’s difficult to pin down exactly what’s happening because Russell doesn’t seem to be playing the games we’ve come to expect with work such as this. While it cites Pollock, it doesn’t come across as a detached paying of lip-service. Though he may appear to be deploying typical Mike Kelley-ish or Paul McCarthy-esque strategies of desublimation, the work ‘works’ too well to be an instance of one-dimensional anti-aesthetics. Rather, he uses Pollock as a cipher of Modernist abstraction to see what it might mean to ‘do a Pollock’, to go ‘elsewhere’ today. There’s a particular kind of intelligence to Russell’s manoeuvrings that does not consist in working from a critical pretext, but moves with an intuitive sense of humour to arrive at a conclusion before theory does. When something becomes too ‘serious’ maybe it ceases to be interesting or problematic and it’s time to go elsewhere, to create new problems. In this way the ‘philosophy’ may indeed inhere in the ‘meat’.

Similarly, other works in the exhibition make art ‘out of’ fashion and the spectacle. Fraudulently Valorised as Exceeding Rational Thought, lifts from a 1970s’ fashion shoot, while Limited Options, enters a cartoon kitsch territory reminiscent of recent Jeff Koons. As with The Philosophy is in the Meat, the work operates in different registers, but what sets Russell apart is that he does not resolve these registers into any neat dialectic. He is not content to float on the surface of the spectacle, but neither does he go for the option of abjectly rupturing it. Rather, he goes beyond the opposition between art and fashion neither by collapsing the two into each other nor through critique, but by upping the aesthetic stakes. While ‘options’ themselves may indeed be ‘limited’, what we do and where we go with them is not. Rather than mourning lost options, Russell opts for Gilles Deleuze’s affirmative ‘art of combinations’, which is the process of synthesizing disparate elements: open-ended assemblages that resonate and vibrate together to create not an organic unity or a tasteful ‘rightness’ but something possessed of the ‘right’ kind of ‘wrongness’; a confounding logic but accessible if the viewer has the sense of humour to go with the work. This aesthetics is not an added supplement in the sense in which we used to refer to something as being ‘aestheticized’ but is in itself active, affirmative and potentially political.

The half-mocking Deleuzianism of Russell’s press release displays a welcome ironic scepticism towards the increasingly over-serious readings of that philosopher currently being applied to art, as well as casting a sceptical eye towards the current art-world moratorium on irony. At the same time his redeeming humour still betrays a paradoxically sincere, but far from Romantic, belief in the ways in which art is capable of discovering new possibilities and, proving that artists often make very good archaeologists, shows us a new Pollock, a virtual-reality one for our so-called digital age.