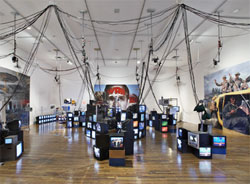 The first indication of Jon Kessler’s multi-media kinetic installation The Palace at 4am (2005) was a metronomic mechanical drone audible down the hallways of P.S.1. The second, placed at the threshold of the gallery, was The Office (2005), a plasma screen showing a static shot of a bland corporate reception area with an anim-ated grid ceiling moviing rapidly above the Barcelona chairs and mid-century Modernist décor.

This innocuous image of a welcoming business vestibule was the viewer’s last chance to experience anything approximating stability. Once past this point of entry, visitors were immediately plunged into a technological maelstrom – frenetic, sensorially overwhelming, seemingly hot to the point of combustion.
Relying on a surfeit of monitors, CCTV cameras, a cross-cutting mix of live and taped video feeds and moving mechanical parts, the work visualized not only the construction of media representations but also the cognitive delirium induced by our media-saturated awareness of events and socio-political realities close to home and far away. Surveillance cameras mounted on rickety clockwork systems of pulleys, cogs, gears, hinges and conveyor belts charged forward and spun wildly, capturing dolls, news stills, advertisements, postcards and photocollages – in a fevered onslaught of complex photomontages that were immediately screened on monitors in real time. The content of the imagery – the wars in Iraq and Afghanistan, aeroplanes, luxury cars, Apple computers, George W. Bush, Saddam Hussein, Osama bin Laden, fashion models, soldiers, children – blazed in rapid, incessant succession, implying a continuum of complicity, a world in which no image and no footage is objective or innocent. In one repeated clip we even watch the final seconds of a point-of-view shot from a Predator drone smart missile zeroing in on P.S.1 itself.

Viewers moving from one overheated island of wires and cables to another were caught in the crossfire of overhead spinning cameras – Kessler calls them ‘snipers’ – effectively constructing a constantly changing exhibition ‘reality’ that implicates each visitor. The ‘snipers’ hanging from the ceiling link separate sculptures into a complex, integrated whole, binding autonomous art works together into an interwoven web of impact and meaning. The Palace at 4am is Kessler’s first installation (a masterful expansion of ideas launched in a smaller exhibition at Deitch Projects in 2004), and the central gallery functions as the core from whence auxiliary galleries feed and receive information, even as they serve as entities in their own right.

The ‘Swans’, for example, a series of wall-mounted sculptures pairing small monitors with pieces of cut metal onto which images from women’s magazines were pasted over their interiors, were an incisive critique of our body-obsessed, oversexed culture. A tiny camera, tucked behind, captured both glossy image and torqued metal. The depiction on the screen is a fractured body eliciting a painful beauty indebted to Surrealist photography. The camera, however, also caught the viewer, a disorienting sensation of being both in front of and behind the ‘mask’.

Elsewhere Kessler addressed perceptions of ‘the Other’. In the mini-carousel-like Theater of Ideas (2005) a white dunce-capped figure sat at the centre of spinning concentric rings consisting of images of hanged soldiers, a G.I. standing guard, translucent coloured panels, Kabuki figurines and finally red splatter-paintings. The sculpture was optically captivating, rather like a topical merry-go-round (many works reference model-making or modes of display). Although Kessler describes it as an experience of how someone from the West might be frightened by something acutely foreign, it is curious to consider the coloured panels and paint as references to Western cultural and artistic Modernism. In that light the shifting registers of East and West are joined by the bifurcation between high and low culture, as well the haves and the have-nots, and remind us that actions (and justifications) can vary widely depending on circumstances. The obliteration of any readable image in the works’ companion piece – a wall of 49 televisions screening views of the quickly shifting ‘Theater’ – suggested that content dissolves as quickly as it is created, and that the main message in a system of ceaseless broadcasting is anxiety and fear.

This body of work came about after 11 September 2001. Kessler, a resident of lower Manhattan, had watched the Twin Towers crumble. Unable to drive the indelible images from his head, he turned to video and began crafting. In time, however, the medium became a means for him to channel his fury against the Bush administration and his country’s ill-conceived actions at home and abroad. Exhilarating, frightening, unapologetically bombastic, at times anything but subtle, The Palace at 4 am was nonetheless a welcome wake-up call.