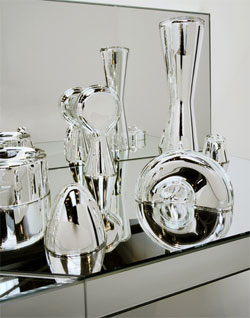 Over 13 billion years ago our universe sprang into being when a core of infinitely dense hot matter suddenly expanded into the wider, larger cosmos we inhabit today. The Big Bang theory was an explanation that was utterly simple yet infinitely complicated, and it was making headlines in 1965, when remnants of the original heat were detected in the form of cosmic microwave background radiation and provided observable proof of the universe’s spectacular genesis.

In Manhattan news of this discovery coincided with the city’s greatest cultural expansion ever: the construction of the Lincoln Center for the Performing Arts, which united major dance, music and theatre facilities. At the complex’s epicentre was Wallace K. Harrison’s grandiose Metropolitan Opera House, within which a relic of that space-obsessed moment in time remains: the renowned spiky crystal chandeliers that dramatically descend from the high ceiling like galactic clusters and retract heavenwards as the curtain’s rise.

For the show ‘Modernity 1929–1965’ Josiah McElheny treated these magnificent lights as a new nexus in his continuing exploration into
Modernism’s quirkier moments and presents his most ambitious project to date. The work, An End to Modernity (2005), is a suspended constellation of hand-blown glass and industrial chrome over five metres in diameter which elegantly fuses design and science. While the Metropolitan’s chandeliers evoke the explosive beginnings of time, McElheny’s reinterpretation attempts a depiction of the Big Bang with scientific acuity. Working with a cosmologist and recognizing the impossibility of capturing the dynamism of outer space in static sculpture, the team devised a model whereby rod length represents the number of years after the bang, and arrangements of glass at each rod’s terminus stand for a galactic formation at the corresponding moment. Each ‘galaxy’ is a unique composition of glass orbs, discs, lights and chrome balls; hence the sculpture creates a conceptual model for the universe’s evolution, differentiation, expansion and retraction. The highly reflective chrome draws the viewer into a sparkling sea of self-reflection, so that standing square on the gallery floor one found oneself physically, and conceptually, in the present. Whether the mass of glass and chrome suspended from the gallery’s ceiling is a harbinger of things to come is hard to say: its delicate position hovering a mere six inches above the floor suggests an end – to artistic styles, to ideologies and to cosmic expansion – yet its beguiling and beautiful composition makes one wonder whether worrying about the end has any meaning at all.

An End to Modernity is accompanied by a fine film, Conceptual Drawings for a Chandelier, 1965 (2005), which inter-cuts 16mm footage shot at the Metropolitan with animated diagrammatic drawings of the Big Bang. With an ethereal, sometimes ominous, electronic soundtrack the juxtaposition between close-ups of crystalline forms and reductive scientific illustrations captures the seductive raptures of a starry night, our age-old desire to comprehend the cosmos and our still humble means of explanation and representation.

These pieces would have been enough: their scale and scope (of idea and of physical structure) beg a focused environment in which to unfurl with time. Instead, the exhibition included several other sculptures that, while excellent, required a space of their own. Architectural Model for a Totally Reflective Landscape (Park) and (Playground) (both 2006) continue McElheny’s inquiries into a 1929 conversation between Buckminster Fuller and Isamu Noguchi in which they determined a shadow-free environment could only be realized with wholly reflective objects positioned in a wholly reflective place. In hand-blown mirrored glass, set atop reflective shelves, McElheny captures the organic, geometric distortions of Noguchi’s three-dimensional works. The languid grace and buoyant forms continue his investigations into gravity and weight, and McElheny shares the earlier artist’s alchemical ability to create seamless, curvilinear shapes. Both Fuller and Noguchi used visual metaphor to address social and philosophical positions. Although McElheny’s literal manifestation of their proposal demonstrates its inherent dystopic confusion, his exacting craftsmanship suggests an almost devotional sympathy for their cause.

Also on view is one of the artist’s famed vitrines, a mirrored box filled with meticulous quicksilver reproductions of 20th-century barware that repeat themselves infinitely. A one-way mirror excludes the viewer from this visual echo chamber of reflective surfaces and positions the spectator in the discomforting role of an observer who is simultaneously non-existent.
So what, exactly, is McElheny trying to tell us about Modernity, which he bookends with the Noguchi/Fuller conversation and the discovery of cosmic radiation? On the one hand, his thoughtful and meticulous work implies a deep affinity with those who sought transcendence through art and design. On the other, his constructions seem ultimately to exclude the viewer or annihilate the idea. By bringing our galaxies (or our Utopian conceits or our decorative design objects for ‘better living’) before our critical gaze, McElheny leaves the answer open to the viewer.