[member:membership-name]
[member:full-name]
VIEW MY DASHBOARD
BY Dominic Eichler in Reviews | 05 MAY 07 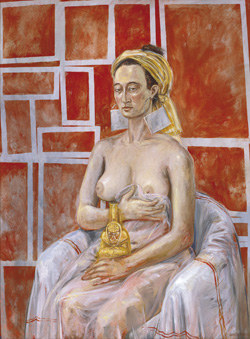 Much better late than never, Juan Davila’s recent retrospective, which consisted mainly of a selection of his paintings since the mid-1970s, was a thrillingly bombastic, high-keyed and elaborately staged visual assault. More than two decades ago, Davila’s multi-panelled work Stupid as a Painter (1981–2) – featuring Kiss of the Spider Woman graphics, an image of Marilyn Monroe masturbating and a crucifix perilously near a vagina dentate – was the subject of a high-profile censorship scandal after it was removed from the 1982 Sydney Biennale. A right-wing religious leader made a complaint to the local Vice Squad, apparently noting: ‘The only thing the artist omitted was bestiality.’ This mixed-media work is typical of Davila’s practice, entailing a wild, sometimes caustic, mix of visual references and sources. In his compositions – painted in a variety of styles that encompass Latin Surrealism, a pastiche of Pop art and, in recent years, a freehand realism – he refigures and combines everything from Tom of Finland characters and Roy Lichtenstein paintings to satirical portraits of Latin American and Australian political figures. In this exhibition, Davila chose not to show his most infamous work again. However, based on the evidence of this retrospective, this decision was not the result of him mellowing with age. In fact, this exhibition showed him to be as unrepentant, defiant and determined as ever about the socio-political agency of painting, and the possibility that it can be used as a form of critical vivisection of culture and politics.

In the main space of NGV International, Davila took out dividing walls to create a parody of a 19th-century European grand hall, with his works lining the space. To enhance the effect, he painted the remaining walls mauve, added an ornamental frieze and, for good measure, partly coloured the ceiling. To complete the setting, he added a black and white chequered floor and a line of benches for visitors.

Davila nearly always extends any given frame, both literally and contextually. Here, covering most of the available wall space, was a selection of paintings ranging from his epic 1980s murals – including the hilarious Fable of Australian Painting (1982–3), in which figures ape the signature style of canonized Australian painters (Sidney Nolan’s portraits of black box-headed bush ranger Ned Kelly, for instance) – to relatively new works such as Guacolda del Carmen Gallardo (2004) – an enigmatic portrait of an old friend and community leader, depicted as a young woman sitting in front of multiple empty picture frames. The combined effect of these works was dizzying, like walking into an optical frenzy. Two museum guards, doubtless taken aback themselves by the work’s explicit sexual content (paintings such as Schreber’s Semblance, from 1993, are full of hermaphrodites and buggery), identified with my instinctive turn-on-my-heels response. But double-takes are necessary if you want to open yourself up to a radical aesthetic experience, or try to do justice to a life’s work on freedom and corruption.

Davila moved from Chile to Australia in 1974, shortly after Augusto Pinochet seized power and ever since his work has addressed this personal sense of rupture and the conviction that art should speak critically of those in power – whether that means governments, art canons or patriarchy in general. Straddling the Pacific, his work is packed with parallel discourses and unflattering comparisons between the post-colonial situations in Latin America and Australia. Paintings like The Woomera Concentration Camp, South Australia, January 2001 (2002), for instance, are full-frontal attacks on Australia’s shameful refugee compounds, while his iconoclastic portraits of Simón Bolívar refigure the liberator as a queer warrior. Co-existent and intertwined with such themes are his analyses of sexuality and psychoanalysis. Here, mixed-race figures, hermaphrodites and characters in drag are key: for Davila, desire is still the most repressed topic in art.

Davila’s images are loaded like banquets for the overindulged, yet there are always tenderly rendered details. He palpably loves paint and painting, but not so much that it makes his work uptight. He keeps it loose, allowing the ugly and the coarse, the beautiful and the irritating, to coexist; his style games break all kinds of rules and taste boundaries, preferring the unpalatable truth, and revelling in the garish. Davila can draw and reproduce at will. The artist's images don’t just try to seduce, they scream and berate. It’s easy to get emotional about them because he seems to want you to feel as impassioned as he does about politics and sexuality and a bastardized vision of our communal body. Davila wants us, like him, to rob the world image bank and redistribute its wealth.