Trying to see the big picture on a visit to London 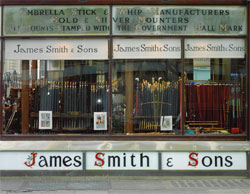 I am limping across London in midwinter. Here at the behest of the Royal College of Art’s graduate curatorial programme I am doing what I have always done to subsidize insufficient exhibition research budgets: I am travelling on my mouth. But my back is killing me. This is the price one pays for years of sitting at a keyboard thinking out loud.

Since it is London and antique shops are everywhere, I begin to wonder whether I should find myself a cane. The shooting pains are very real, but the silver lining in their cloud of discomfort is that they give me a reason to go treasure-hunting for a sculpturally satisfying object and an excuse for using it. Boys have fantasies of adventure; men have fantasies of style, which is why middle-aged crazies suddenly affect previously avoided clothing and accessories. Perhaps this, then, is the time to become the Baudelairean dandy to whom I have devoted so much reflection and reverie. In a secondhand shop off Charing Cross Road I find two inexpensive 19th-century hardwood sticks – one with an ivory handle, the other with silver trim – but common sense, the nemesis of all things Baudelairean, brings me up short with the realization that such a prop, in the literal as well as theatrical sense, would look ridiculous on a 21st-century Brooklynite, and I shamefully decline the chance to transform myself into a self-made flâneur.

In any case I am not aimless and cannot saunter. I have a mission: to see as much art as I can. And so in chill greyness I trudge from museum to corporate space to luxurious white cube to hole-in-the-wall gallery, sampling the best that this formerly dour but now booming art capital has to offer. I catch the Martin Kippenberger retrospective at the Tate Modern (handsomely done but lacking the artist’s manic energy), Chris Ofili and John Latham plus William Blake, Henry Fuseli and James Gillray at Tate Britain (a surreal synopsis of English art history!), Tino Sehgal at the ICA (manipulative, surely, but more intimate and effective than his Venice Biennale presentation) and a light art show at the Bloomberg building, coinciding with the Hayward’s Dan Flavin retrospective. I want to see David Batchelor’s work, which is the survey’s centrepiece, and, mulling over media tycoon politicians, I ask myself what it would take to get me to cross the threshold of a Silvio Berlusconi-sponsored exhibition. Next stop, Michael Elmgreen and Ingar Dragset’s ‘The Welfare Show’ at the Serpentine – the morbid, critically imploding and thus dysfunctional fusion of the museum’s institutional space with those of the welfare state; and from there all over town to scattered galleries to see commercial shows, including the happy coincidence of stumbling across the first one-woman outing of Sabine Moritz, a young German painter whose studio I have visited in Cologne.

The fact remains that with or without my hobbled gait it is impossible to cover the ground adequately. From Kensington to Bankside, Soho to Southwark, then back to the Mall and from there to the East End, with stops in between all points, the art matrix of London is vast and loosely connected, resembling the Borgesian map that is identical in surface to the territory it describes. Good old Anglo-Saxon reliance on Shanks’ pony won’t do the trick, especially if it gets cramp. Neither will the Tube, since once you’ve arrived at a jumping-off point, you’ve got miles to go in most directions to touch base with all the potentially interesting places in the vicinity. Needless to say, taxis are, thanks to Bushian economics and current free-fall exchange rates, out of hailing range of all Americans save the proverbially rich. To have even a reasonable first-hand idea of what is happening would require more than a week – I have parts of three days – and as I sometimes blindly pre-select from a gallery guide, I know I am missing upstarts and out-of-the-way venues, while rushing through many of those I do reach.

Multiply this by the number of art capitals – New York’s scene zigzags across Manhattan’s grid while jumping the East River to Bronx, Queens and Brooklyn; Los Angeles has always sprawled and continues sprawling; Paris is becoming a variant on the urban drift of Guy Debord (militantly factionalizing flâneur with a thirst equal to Kippenberger’s); Berlin has seemingly limitless room to grow into its historical dead zones – and we confront a reality in which geographic concentration irretrievably disperses aesthetic concentration to the point of entropy. The internet and art affairs are the logical antidotes – one-stop information centres – but art is a matter of experiencing not referencing. So, much like fellow addicts of direct contact, I plunge forward on aching legs while falling behind with every step. I am reminded that in having too much of a good thing we never have enough, and yet again that global diffusion means that nobody actually looking at work can also see the big picture.

Robert Storr is the first Rosalie Solow Professor of Modern Art at the Institute of Fine Arts, New York University.