For this series frieze d/e asks an artist to submit a visual response to a recent exhibition. Andreas Siekmann reflects on the recent show Annette Wehrmann. Gehirn und Geld in the Hamburger Kunsthalle 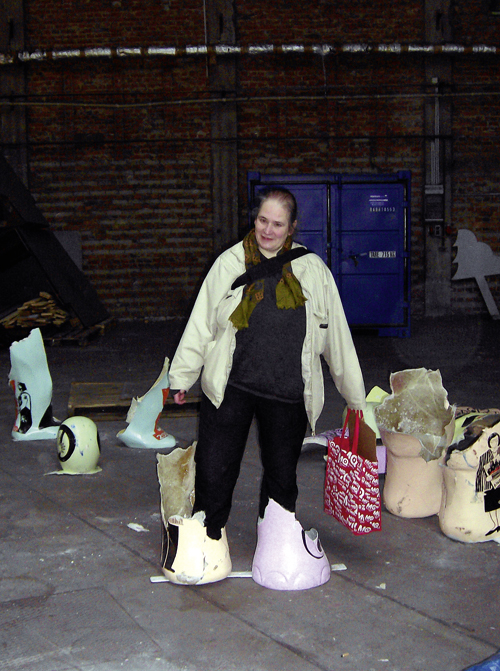 This photograph shows Annette Wehrmann during preparations for Sculpture Projects Münster 2007. She is standing in the feet of a demolished Buddy Bear, the kind you find in many towns as a uniform sculptural marketing device, and which I had demolished for my piece Trickle down – der öffentliche Raum im Zeitalter seiner Privatisierung (Trickle down, public space in the age of its privatization, 2007). For me, this picture exemplifies the ‘places of against’ – the major role of negativity – that Wehrmann envisioned. ‘Strictly speaking’, she wrote in 2002, ‘the PLACE OF AGAINST takes up no space. It can make its appearance anywhere at all. The PLACE OF AGAINST is always on the move: it emerges briefly in the inner or outer margins […] of the urban organism […] In the PLACE OF AGAINST, inhabitants […] can meet without purpose or meaning, but the opposite, or nothing at all, is also possible. In the PLACE OF AGAINST the heaps […] grow: heaps of time and boredom, abundance and waste.’ Logically enough, Wehrmann’s utopia was a negative form of ‘art in public space’. It was devoted to precisely that which city branding tries to prevent.
Translated by Nicholas Grindell

Andreas Siekmann is an artist based in Berlin. He is currently included in Love is Colder than Capital at Kunsthaus Bregenz. He will be included in the Content of Form at Generali Foundation, Vienna, opening 17 May.