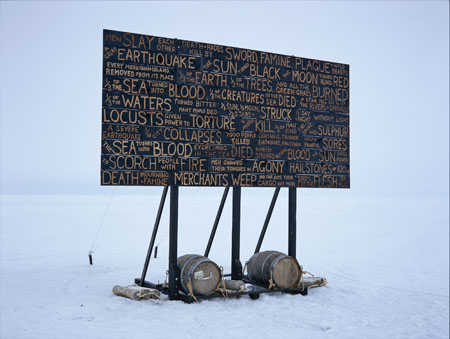 In the work of Vancouver-based artist Kevin Schmidt, both indoors and outdoors are presented as slippery spaces, displacing our understanding of what should happen where. Much of the artist’s output originates as performance executed against the sublime backdrops of the natural world, whether aiming Roman candles at the Aurora Borealis (Aurora with Roman Candle, 2007) or playing ‘Stairway to Heaven’ on a Fender Telecaster as the sun rises over a stretch of beach on Vancouver Island (Long Beach Led Zep, 2002). These spectacular works are then presented as comparatively discreet documents – photographs, videos, installations – in museums and galleries, humble artefacts compared to the intrepid actions that conceived them. These highly visible tensions – between inside and out, performance and remnant – help alert viewers to the presence of other, more insidious inversions in Schmidt’s work.
The photograph A Sign in the Northwest Passage (all works 2010), displayed in his solo exhibition at Catriona Jeffries, offers an image of an enormous billboard, adorned with a hand-routed text from the Book of Revelations and installed in an arctic snowfield. Bearing apocalyptic messages (‘death, mourning, famine’ and other predictions of doom), the sign was placed on an expanse of pack ice that will melt during the spring thaw and, theoretically, drift in the frigid waters of the northern Pacific, advertising its desolate vision to a fittingly desolate seascape. Schmidt’s trek beyond Tuktoyaktuk, where the sign was installed, is documented in a book of photographs, which visitors could peruse at a makeshift camp inside the gallery. Sitting in one of the camp’s collapsible chairs, the gallery’s stark white walls begin to feel as chilly and endless as the snowy terrain in the images.
That sensation was compounded by Autonomous Projection Room #1, a large tent made from a white tarpaulin, where one might expect Schmidt and his Arctic guides to have found refuge while installing the sign. Instead, it was an ad hoc cinema for another of the artist’s heroic works: in the 11-and-a-half-hour video Epic Journey, Schmidt presents a nighttime screening of the entire Lord of the Rings (2001–3) trilogy in a tiny boat floating down British Columbia’s Fraser River, shot by a camera crew in a second boat trailing the action. While the scope of this undertaking echoes the epic nature of the films, there is a fascinating relationship between the artist’s adventure and the dazzling battle scenes of the movies. The shimmering reflections of lights on the river and the gentle bobbing of the second boat’s camera are lyrical sights, but they are rendered nearly invisible by the screen-within-a-screen.
The distracting nature of spectacle recurs in Angel of Light, an installation of ten customized ‘gobos,’ the multi-coloured, roving stage lights commonly used at rock concerts. Here, the lights project words from a song by Petra, the first Christian band to package its evangelism in the secular sounds and postures of rock. As snippets of lyrics, redolent of the baleful inscriptions in Sign, darted across the gallery’s walls, the piece pushed the themes of religious extremism present in both A Sign in the Northwest Passage and Epic Journey into the light, dredging them from the shadow of the labour required to realize them. Suddenly, the disparity between content and form – the propagandistic smuggling of ideology through explicitly commercial means – is readily visible: the prophecy of Revelations is translated as a billboard and Tolkien’s biblical allegory, screened in a structure recast as a revival meeting’s tent, is presented as fantasy blockbuster. While religious faith is an apt metaphor for artistic conviction, the artist’s use of these signifiers highlights the potent persuasion of form and the primacy of vehicle over tenor in contemporary conceptual art practices. Invoking media theorist Marshall McLuhan’s dictum, Schmidt demonstrates how the medium is, indeed, the massage.