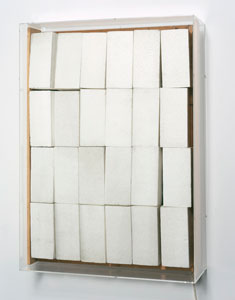 Writing in the pages of Artforum in 2000, Yve-Alain Bois applauded the survey of Kinetic art that Guy Brett had just assembled for galleries in London and Barcelona. He lamented how the movement met an early death and how it was upstaged by – and often confused with – what he saw as the shinier, sillier distractions of Op art. This year, however, with shows of reassessment in both Frankfurt and Columbus, Ohio, it seems that forceful arguments are being made on behalf of Op. This may seem contrarian, since not only did Kinetic art hymn the machine, the central motif of the 20th century, but it also emerged with a mighty pedigree and strong roots sunk deep into Constructivism and Dada (thus, complexly, in Utopianism and anarchy). Yet with the triumph of networks over machines, and the thumping victory of the spectacular image over all other means of distraction, Op is looking more important than ever.

So perhaps this summer was an opportune moment for the small, concise selection of Kinetic art that collector Erika Hoffmann helped bring together at Andrea Rosen Gallery. It seemed winsome and nostalgic: writing in the press release, Hoffmann recalled how she and her late husband used to meet with artists from the Zero group (a large, influential and fluid group that began in Dusseldorf and ultimately united many international figures in Kineticism) in order to ‘question any so-called truth or conventional custom, to doubt any political agreement or art theory’. (Did collectors really once do such things?) The works on view weren’t borrowed from Hoffmann’s collection, but they did pay tribute to her favourites. The grouping didn’t aim to be representative – there was no work by Alexander Calder, Georges Vantongerloo, Hélio Oiticica or David Medalla – but there were examples by François Morellet, Jesús Rafaël Soto, Jean Tinguely and Julio Le Parc, among others.

Such a focused and personal choice was Hoffmann’s to make, yet it might have benefited the show to reflect some of the wild formal innovation of the movement. Most works here were of the discrete, wall-based variety (activated by light switches and push buttons), and only two were remotely sculptural. Tinguely’s Maschinenbild Haus Lange (Lange House Machine Picture, 1960) took the form of a wall-hanging tableau, though its arrangement of five slowly rotating wood rectangles suggested the possibility of sculptural form. And Morellet’s Fil avec mouvement ondulatoire (Wave Motion Thread, 1965) employed an overhead electric motor to spin a narrow thread suspending a plummet, the weight causing the line to reel around in an oscillating spiral. The illusion felt fresh and marvellous, while the little rubber plummet reminded one that its secret was just some garden-variety optics.

In fact, so many of the works were preoccupied with the limited capabilities and boundaries of human perception that the show could equally have been seen as addressing many of Op’s concerns. Le Parc’s Mobile noir sur noir (Black Mobile on Black, 1960) used small square chips of reflective black plastic, turning slowly on vertical threads, to create effects associated with cinema and surveillance. Another work reminded viewers of their frailties by showing how difficult it is even to apprehend fully the visual field right in front of our noses: Hartmut Böhm’s HF10 (1965) employed a grid of electrically charged magnets in a Perspex box to make small white pieces of plastic leap to attention and then flop over (I yearned to predict which one will flip next).

A sign was posted up at the front of the exhibition, asking viewers to respect the aged state of these vintage objects and only to switch them on for short intervals, lest the old dears expire entirely. The mood was bitter-sweet, as if revisiting the pleasures of bygone childhood toys and games. But then viewers came to the end, and to Gianni Colombo’s Strutturazione Pulsante (Pulsating Structure, 1959), and saw how grubby was the grid of polystyrene blocks that Colombo had installed to tip and roll, slowly, individually, creaking uncertainly with each movement. At that point you realized what hopes went into all this work – for technology, for art, for humanity – and felt moved.