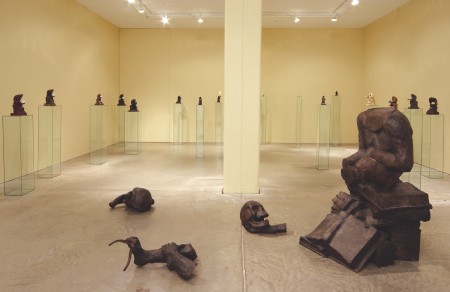 The little-known German sculptor Hugo Rheinhold’s most enduring legacy is a statuette of a chimpanzee sitting on a pile of books and regarding a human skull that it holds in one hand. Affe mit Schädel (Ape with Skull, 1892) has become a widely transmitted and transmuted icon, cropping up in sitting-rooms and studies throughout the 20th century. One such study belonged to Lenin, who was given an edition of the sculpture by an American businessman attempting to solicit business in Communist Russia. Another emerged from the wreckage of a Nazi bomber in an Austrian lake, salvaged by disappointed divers who had believed the plane to be loaded with bullion.

Rheinhold probably intended his work as a gently ironic comment on the evolutionary theories of Charles Darwin (whose name appears on the spine of one of the books). More quixotic than polemical, Affe mit Schädel nevertheless incorporates some features that lead the viewer toward subtler philosophical musings. On the page of one open book can be seen the inscription ‘Eritis sicut deus’ (‘And ye shall be as God’) – the snake’s encouragement to Eve before she ate the forbidden apple. The significant conclusion to the sentence – ‘scientes bonum et malum’ (‘knowing good and evil’) – has been ominously torn away. Rheinhold’s ape also holds in one foot a pair of callipers, indicating that getting the measure of man is an empirical rather than an intuitive enterprise, even for a chimpanzee.

While Rheinhold sold the reproduction rights to his sculpture soon after it was first exhibited, the resonance of the image can be measured by the number of manufacturers who have found it profitable to produce their own versions. Klaus Weber has borrowed and bought on eBay over 30 of these figurines, which in his installation Shape of the Ape (2007) are perched on tall glass pedestals around the edge of the gallery. There is no doubt that most of these are pretty ugly objects; fashioned in pewter, resin, ceramic or plaster as well as the figure’s original bronze, this motley assembly of bastardizations of the original includes diverse species of primate, and any combination of the key elements of books, quotation, skull, callipers and chin-stroke. One has been turned into a money box; another’s head flips back to reveal a cigarette lighter. At the centre of the gallery sits Weber’s own addition to the canon: a large bronze approximation of the original, but with the head, skull and legs lying nearby on the floor, as they might have been during the casting process. When reassembled, the human skull, held in one hand, could quite easily take the place of the ape’s head, resting in the other hand. Beyond Rheinhold’s dreamlike (or nightmarish?) exchange of roles between the animal and the human, Weber has added his own layer of equivocation to the sculpture that connects more to the process of production and, by extension, the economic system that allowed it to come into being.

The work brings to mind Franz Kafka’s A Report to an Academy (1917), a fictional speech given by Red Peter, an ape that, while in captivity, decided to conduct himself as a human being in order to escape his confinement. Weber’s previous works have often set up situations in which the skin of societal normality is ruptured by alien, brutish and potentially violent forces, whether through the gushing fountain created by the collision of a car and a fire hydrant (Fountain Loma Dr / W 6th St, 2002) or mushrooms pushing through a concrete floor (Unfolding Cul-de-sac, 2004). In Shape of the Ape this surging natural energy is represented not only by a wild animal appropriating the manners of a human being but also in the evolution of a piece of iconography through the forces of free-market capitalism. The themes of acquisitiveness, resourcefulness and exploitation are intertwined in the story of Rheinhold’s ape, sketching a micro-history of the 20th century. Weber’s conception of nature seems to include all these vital and savage impulses, which, when contrasted with the placid and thoughtful image of the ape, make the human race seem far less civilized, and far wilder, than our simian cousins. This interplay between the human and the animal is nothing short of incendiary in a country in which, according to a poll in 2005, 54 percent of adults reject the idea that humans are descended from earlier species.

The gallery’s office contains an addendum to the exhibition: reproductions of a photograph of Lenin’s desk, a newspaper story detailing the discovery of Affe mit Schädel in the Nazi bomber, an old photograph of suited men standing around a monkey sitting on the back of a pig, and a letter from 1891 outlawing the vaudeville performance of two children known as ‘Joco and Coco’, a xylophone player and a ‘human monkey’. These documents, despite acknowledging an interspecies hierarchy of sorts, seem to suggest that, as humans, our position as the architects and arbiters of civilization is by no means assured. As Red Peter said, the experience of apishness ‘tickles at the heels of everyone who walks here on earth’.