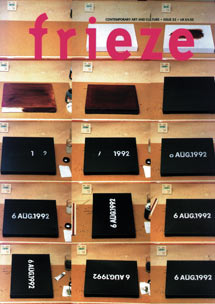 Since Mary Boone was characterised, cartoonishly I might add (but who could really tell?), in a popular film, her actions have taken on an importance greater than probably deserved. After all, Castelli, Gagosian and Glimcher, while able to tinker with culture as much as their clients allow them, weren't given so swift an opportunity to become mass cultural icons in the way Boone was during the last years of Basquiat. So, when Ellen Gallagher entered the Boone stable of artists, it suggested a

cultural legerdemain that seemed strange. While Boone ignored black artists in the heyday of the 80s, her list of artists now features two young black artists whose work shares a strange sense of uniqueness. Gallagher and Leonardo Drew subvert the white critical establishment's attempts to attach identity to the cultural achievements of African-American practitioners. Gallagher's paintings present a trace of pickaninny imagery, yet not enough to distract from her indisputable aesthetic concerns. Drew uses the native informant stance as a vanishing point. His sculptural installations present the viewer with a metaphorical, and sometimes literal, wall. An installation in 1992 at Threadwaxing Space engulfed the viewer with the aroma of charred wood and cotton. Similarly, at the Boone Gallery Number 55 (1996) emitted an aroma of something that had happened and was gone. In a Drew work, something has always just happened.

The viewer's visual arrangement of space is being subconsciously reordered by faint shards of memory. Drew has the intelligence to avoid any naming of these recollections. Embedded in a piece may be mirror, feathers or a subtle piece of kitsch, yet the overwhelming sense of scale and weight that even the smaller works carry wash the viewer with other sensations which can easily be evoked by, say, architecture. In the recent show Drew has pared down the effusive elements of the work. This is somewhat disappointing but it does turn one's eye to the less dramatic concerns of form and construction.

Additionally Drew plays with the flatness of colour fields in painting by adding an extra dimension and texture, which allow a single colour to vary its hue in crevices and cracks. A piece which breaks down the literal wall Drew presents might represent his own critical breakthrough, or breakdown. It's difficult to circumscribe the varying missions Drew sets out upon. Is he rescuing abstraction from its terminal state? Is he attempting a delicate metaphor for personal experience? Is he surfing the gap between installation and the sculptural? Conceptual and Structural? SoHo and 57th? And what exactly is Boone up to? Leonardo Drew is an unfinished narrative which is turning into a sleeper hit while the plot thickens.