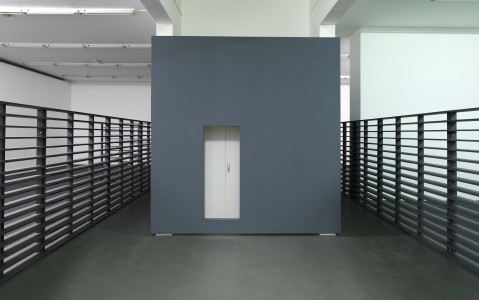 The first part of Liam Gillick’s mid-career retrospective opened at Witte de With, acts as an inquiry into several key components of art discourse, including the role of the institution, the value of artistic collaboration and, of course, the notion of a retrospective itself. As suggested by its title, ‘Three Perspectives and a Short Scenario’, the exhibition takes place in four parts: three separate exhibitions (the ‘perspectives’) at Witte de With, Kunsthalle Zurich and the Museum of Contemporary Art in Chicago, as well as a performance element (the ‘short scenario’) to be held in June at Kunstverein Munich.

The work at Witte de With, established the basic framework for the two exhibitions that will follow: a robust conceptual underpinning that orders and contextualizes the core material elements that physically occupy the space. Organization is central to the notion of a retrospective, which implicitly acts as a catalogue of a given body of work, and Gillick enacts that organization on multiple levels: most immediately evident is the way he arranges the exhibition space into zones, using precision-cut MDF boards and sombre tones of grey. This division of the space is both conceptual and physical: half of the area is dubbed an ‘institutional zone’, to be interpreted and filled by each institution to which the show will tour. Witte de With filled this with a sequence of small exhibitions by artists – including Manon de Boer, Keren Cytter and Claire Fontaine – who were chosen without prior consultation with Gillick. Kunsthalle Zurich will use the same space to stage a series of Gillick’s performative works, while the programme for the Museum of Contemporary Art in Chicago is still under discussion.

This ‘institutional zone’ helps delineate Gillick’s own intentions for the display of his work, and the imperatives imposed upon artists by institutions. But it also allows for the expression of each organization’s distinct identity and agenda, emphasizing the diversity of establishments that are herded together under the moniker of ‘institution’.

The remaining gallery spaces outside of this ‘institutional zone’ are occupied by elements common to all three exhibitions: a pair of vitrines displaying Gillick’s printed matter, from posters and catalogues to skateboards and canvas bags; a couple of posters haphazardly affixed to a corridor wall; and an untitled film offering a literal retrospective of Gillick’s work. Using a PowerPoint-style presentation, the film shows photographic documentation of the artist’s past work while a seemingly unrelated text accumulates line by line across the surface of the screen, to the incessant beat of the film’s soundtrack.

One of the key phrases in this text is ‘A desire to account for everything’. The film turns the frustration of clear documentation into a virtue. Elsewhere the exhibition is similarly concerned with resistance – persistently creating barriers between the viewer and the work at hand, whether in the panels delineating the gallery space, in the glass vitrines containing the printed objects or in the very flatness of the film screen. This consistent two-dimensionality becomes so strong that even three-dimensional elements – such as the architectural units dividing the space – bear a distinctly two-dimensional quality, resembling digital renderings as much as three-dimensional components.
The effect is one of learning to see the world in two dimensions, and through the filter of the computer screen on which Gillick creates his work. Indeed, the language of clusters and networks that has long been of interest to Gillick finds its literal representation in the film, which is in many ways the core element of the exhibition. Across the screen, text gathers in pre-delineated boxes, moving in different directions and forming distinctly visual clusters. The text, which relates the story of an abandoned factory and its workers, is surprisingly melancholy. The effect is achieved as much through the slow accumulation of words across the screen as through the direct meaning of the story itself. In the context of the retrospective – however much an anti-retrospective it may essentially be – that sense of accumulation and retroactive interpretation seems indivisible from the assessment of an artistic career.

Gillick has stated that he is more interested in the production of an art work than in its consumption, but here he seems, at least momentarily, to stage the manner in which the story of production is constructed and consumed. The effect is surprisingly moving, and heightened by the rigour – both visual and conceptual – of the exhibition. For all that he resists the notion of the retrospective, Gillick remains keenly attuned to the emotional weight of meaning construed after the fact.