In an ongoing series, frieze asks artists and filmmakers to list the movies that have influenced their practice. 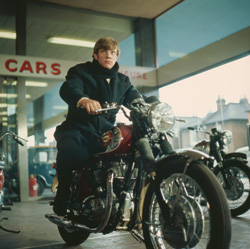 Luke Fowler is an artist and musician based in Glasgow. This summer, he will be showing new film works at Rec. Space, Berlin (27 April – 23 June) and East International, Norwich (14 July – 18 August). His work will also be included in the exhibition ‘Organizing Chaos’ at PS1 Contemporary Art Center, New York (24 May – 10 September).

My formative viewing experiences came from the many films and documentaries that my dad recorded from television throughout his video-owning life. Although his timing was somewhat unreliable (films would often miss their beginning or run out of tape before their conclusion), his knowledge and appreciation of British and world cinema were flawless. I am indebted to him for this induction.

The fantastic If… (Lindsay Anderson, 1968) was one of the first films in my dad’s collection that I could relate to as a teenager. It sparked a youthful obsession with Malcolm McDowell that would lead me to explore the rest of Anderson’s oeuvre. Anderson began his career in documentary with the radical Free Cinema movement of the 1950s, demonstrating an interest in working-class culture that would lead to his Social Realist ‘kitchen sink’ drama This Sporting Life (1963) and subsequently to the state-of-the-nation trilogy If…, O Lucky Man! (1973) and Britannia Hospital (1982). The trilogy’s protagonist is Mick Travis, portrayed by McDowell in If… as the embodiment of teenage defiance. Fusing Realist drama with dreamlike passages, the film centres on Travis’ experiences at an English boarding-school, representing the reactionary trappings of British society: ascetic, sadistic, repressive and hierarchical.

I travelled to a film archive in the Netherlands to see the documentary Asylum (Peter Robinson, 1972) which became a great influence on my own work. Robinson’s film crew spent seven weeks at Archways Community, a therapeutic household based in London run by R.D. Laing and the Philadelphia Association (PA). It is still functioning to this day, albeit in a different shape and form. Archways was the successor to Kingsley Hall, a radical social experiment offering communal living and self-healing to those undergoing mental distress and breakdown. At the start of the documentary Laing states that the PA aims to create ‘an asylum – that is to say, a safe place to be, if you’re a bit scattered and don’t know who you are or where you are’. The film centres on observations of Archways. In one memorable sequence the upper-class father of one of the residents suggests that the solution to his son’s problem would be to hire him a girl; in others we see another resident, David Bell, forced to confront his erratic manner and its effect on the community. Asylum is part of the Direct Cinema school of filmmaking and for me is as important as the work of more established directors such as Frederick Wiseman or Allan King. Robinson made two other films about Laing before the latter’s death; both sadly remain unreleased or incomplete.

A few years ago, when my band Rude Pravo were playing a gig in Brussels, our Belgian singer Lucile took us to the wonderful Cinema Nova, where we stumbled on the truly bizarre and engrossing film Home Sweet Home (Benoît Lamy, 1973). Lamy made the film after witnessing the riots in Paris in May, 1968 and wondering why young people should have a monopoly on civil unrest and dissent. He imagined a parallel world where, instead of the disillusioned youth and workers rioting for jobs, there would be disgruntled and truculent pensioners rioting for dignity, independence and better dinners. The resulting film is this dream, set in an old people’s home, where a new resident incites an uprising to demand better living conditions.

‘You’ve reformed five fags in a row. Why bother with an apathist?’ asks Alfred, the nihilistic photographer played by Elliot Gould in Alan Arkin’s Little Murders (1971). Disillusioned with commercial photography, he turns instead to shooting faeces. The film concerns the relationship between the victimized Alfred and the overbearing Patsy, intent on moulding Alfred into her perfect husband. The highlight of the film is a hilarious hippy marriage ceremony performed by ‘existential priest’ Donald Sutherland. Although suffering somewhat in the adaptation by Jules Feiffer from his original play, it’s nevertheless an amusing attack on American values, the nuclear family, Christianity and marriage.

Journey to the North Pole (Hanne Boenisch, 1971) was the first film to be made about Cornelius Cardew’s Scratch Orchestra. Cardew was an experimental English composer who founded the Scratch Orchestra in order to liberate avant-garde music from the control of the bourgeoisie. The orchestra had no restrictions to its membership and was an anarchic mix of amateurs, students, workers, professional musicians and composers. They wrote and performed graphic scores, group improvisations and deconstructed versions of the popular classics. Cardew sought, idealistically, to take the orchestra to the masses, and this tour captures them performing, predominantly outdoors, in North-East England. This historically important film features extracts from performances by the Scratch Orchestra before their political conversion, prophetically capturing the seeds of dissatisfaction within the orchestra being sown, and featuring Maoist Agit-prop by improvisation guru Keith Rowe. Meanwhile Cardew, who was at this juncture too busy with Confucius to be bothered with Mao, is still convinced by the transformative power of art. In the course of making my own film about the orchestra, Pilgrimage From Scattered Points (2006), I rescued this neglected film from its hiding place in the archives and arranged for its subtitling and first screening in over 20 years.

I was very impressed by the recent exhibition ‘MindFrames: Media Study at Buffalo, 1973–1990’ at ZKM, Karlsruhe, where I managed to catch a day of extracts from Hollis Frampton’s tantalizingly incomplete ‘Magellan Cycle’ (1969–80). Frampton, who made some of the most compelling American Structuralist films, died before he could complete the cycle: a massive undertaking that was planned to last 36 hours and be screened on specific days over a 369-day period. The cycle was based metaphorically on Ferdinand Magellan’s circumnavigation of the world and inspired by Modernist masterpieces such as James Joyce’s Finnegans Wake (1939). Appealing in its ungraspable complexity, the cycle is also at times laugh-out-loud funny. According to critic Michael Zryd, Frampton was frustrated by the earnestness of avant-garde cinema audiences and included a laughter track in one of the films to spell out the intended comedy. The films are loaded with rich aesthetic imagery as well as references to art and film history; there are homages to Sergei Eisenstein, Eadweard Muybridge, Stan Brakhage and Paul Sharits as well as to the Abstract Expressionists and Marcel Duchamp. The most poignant and amusing film is Gloria! (1979), which concludes the cycle and was the last film Frampton made before his death. It is a tribute both to his grandmother – he lists some of her favourite sayings, followed by an alphabetical system categorizing their likeliness of being true – and to the story of Finnegans Wake, as represented in a sequence borrowed from early cinema. It’s a film that I’m sure my dad would have been intrigued enough to tape – in the unlikely event of it ever making it to television.