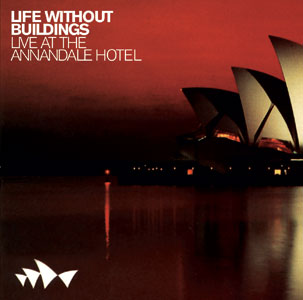 ‘If I lose you if I lose you if I lose you if I lose you u-huh u-huh u-huh mm-hmm.’ Sung by an unaccompanied female voice, so begins Life Without Buildings’ ‘The Leanover’, their début single, released in 2000. A breathless and skittering cascade of words, plaintive, chiming guitars, sing-song bass melodies and syncopated drums tumbling along in a looping, contrapuntal embrace, it’s hard to do justice to the track in print. Transcribing the lyrics fails to capture how poignant the relentless urgency of their delivery is, and adjectives struggle to convey how the song seems to embody at once the qualities of a straight-up pop ballad and a traditional canon as well as the restless, awkward explorations of some imaginary post-Punk band left alone for 20 years, only to be discovered rehearsing in a garage in Scotland. Suffice to say, the release signalled the arrival of a group that over a short space of time – they formed in Glasgow in 1999 and split in 2002 – created a singular yet tantalizingly small body of work.

Named after a track by New Romantic peacocks Japan, Life Without Buildings comprised Sue Tompkins and Chris Evans on, respectively, vocals and bass, Will Bradley playing drums and Robert Johnston on guitar. A quick Google search on them reveals not only the existence of a firm and growing cult following (typical blog entries usually describe how the author fell head over heels for their music only to find, to their dismay, that they’d dissolved some years previously), but also a preponderance of writing about the quartet using that adjectival phrase so beloved of music journalists, ‘art school’. Despite their background – Tompkins and Evans are artists, Bradley a writer and curator, and Johnston a writer and designer – Life Without Buildings were no conceptually arch or studiedly anarchic ‘art band’, although they made a feature of their assets in Tompkins’ unique half-spoken, half-sung vocalizations, which carry through into her spoken-word performance work. (Another listening pleasure to be had is in deciphering Tompkins’ lyrics and the mondegreens – phrases misheard in such a way that they acquire new meanings – that they create. I am convinced that the repeated mantra ‘my lips are sealed’ in the song ‘Juno’ is, in fact, ‘mad as a seal’.) Life Without Buildings married Tompkins’ electric, associative lyrics to elliptical song structures that were shot-through with battered, melancholic optimism like the weathered bricks of a windswept suburban housing scheme. A list of comparable groups might include Television with perhaps a touch of The Smiths, or even early Sugarcubes, yet they always managed to sound greater than the sum of their influences; as the title of their song ‘New Town’ suggests, some place you might be part of yet desire to escape from.

The posthumous release this spring of Live at the Annandale Hotel, a live recording made at the legendary Sydney venue during the band’s Australian tour in 2001, documents a more robust Life Without Buildings than is characterized by their studio recordings. Opening with the choppily cheerful ‘Liberty Feelup’ – previously unreleased, but perhaps their least arresting track – they swiftly plunge into familiar territory with a punchy ‘Let’s Get Out’, its wistful lines, such as ‘I still believe the history of half-past ten’, delivered with strange, declamatory conviction. As their set progresses, including ‘Juno’, the stately ‘Love Trinity’ (‘Are the numbers in love yet?’), ‘Young Offenders’ (‘In any other city in the world, I’m hung up with a sharp click’) and ‘The Leanover’, their sound grows more muscular; Johnston and Evans’ guitar and bass are dusted with fuzz and distortion, Bradley’s drumming is urgent and strident. They finish with an encore – the sparse ‘Sorrow’ and, finally, the driving, exuberant ‘New Town’: ‘If I rewind again, I forgot, rhythm and knowledge, rhythm and knowledge regenerate there.’