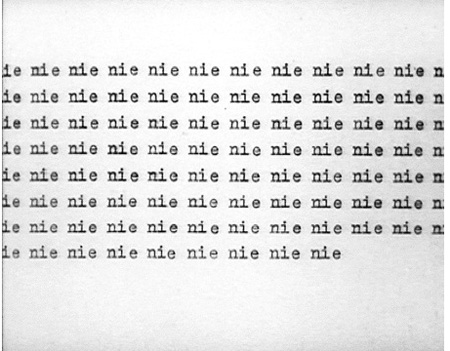 ‘Light Writing’ was an exhibition that nibbled at the tail-end of several decades’ worth of experimental video- and film-based investigations into printed language. This territory is potentially huge, encompassing as it does everything from structuralism and concrete poetry to the correlation between words and power, desire and the mainstream media. Thankfully, the works selected are concise and often dryly funny. Richard Serra’s classic video Television Delivers People (1973), for example, features a blue screen and a scrolling text declaring ‘Television delivers people to the advertiser’ and ‘You are the end product’, while a cheery soap opera-style soundtrack plays in the background. The inclusion of works by Laure Prouvost, John Smith and Steve Hawley – artists of different generations with a shared taste for jocosity and incisive irony – also indicate a show with tongue planted firmly in cheek.
Curated by Duncan White and Steven Ball, researchers based at British Artists’ Film and Video Study Collection in London, ‘Light Writing’ drew from extensive archival research to tease out parallels between works of different generations. Erica Scourti’s Trailer Truths III (2004) picks up Serra’s deconstructive gauntlet with a video composed of texts gleaned from movie trailers. Glittering gold-bullion fonts, gothic scrolls and typewriter scripts are spliced to form sentences: ‘Laws are made / When opportunity knocks’; ‘Power / Is no accident’. The neo-concrete poetry of Pete Spence’s Visual Poem 12 for Paula Claire (1994), which is based in part on the poetry of Guillaume Apollinaire, is echoed in Ball’s own work exploring non-linear text, Direct Language 5.1 (2010), in which the screen is split into nine cells displaying fragments of Stéphane Mallarmé’s poem Un Coup de Dés (Throw of the Dice, 1897).
If these works recuperate historical forms, Louis Henderson’s A Video by Marcel Broodthaers (2010) takes the matter one step further. Henderson’s video essay is based on an archive of letters stored at Tate Britain sent by Marcel Broodthaers to Joseph Beuys, as well as an older cache at the Musée d’Art Moderne de la Ville de Paris, penned by Jacques Offenbach to Richard Wagner a century earlier. Henderson, a young artist who studied under British filmmaker William Raban, is evidently working partly within a film-essay tradition pioneered by Raban, Andrew Kötting and Patrick Keiller, as well as within a more contemporary excavation of the afterlife of seminal art works. The archival is hardly a new subject, as was evinced by the inclusion of Mike Leggett and Ian Breakwell’s ‘Unword’ (1970), a series of performances by Breakwell that incorporated Leggett’s film into subsequent performances, as a sort of cumulative living archive.
One aspect of the show was notable: Banner Repeater’s location, a space next to an East London railway station. Only accessible directly from the station’s platform, the gallery clearly has a quasi-democratic aspiration (think of it like a real-world version of Liam Gillick’s ‘platforms’). It is open at 8am to catch commuters and has a reading room to browse as you wait for the next train. The wordplay in much of the work here – particularly that of Maria Theodoraki, John Smith and Steve Hawley – is as approachable as an easy sudoku puzzle on the morning commute. ‘Light Writing’ was nevertheless not always welcoming to non-art aficionados: Ryszard Wasko’s video Negation (1973) is a structural assault in which the word ‘nie’ is repeated to maddening effect, while David Lamelas’ Reading Of An Extract From Labyrinths By J.L. Borges (1970) meanders through a variety of philosophical definitions. Experimental video and film was never designed for this kind of exposure and no doubt many passers-by will find it baffling. But it is also great to see a show that does not view the public, as Serra’s work would have it, as a corporate product.