Duration, for durational work in a museum, is problematic. Few performances in our Western tradition push past three hours regardless of the genre. But what’s three hours to a museum? A late Thursday evening when admission is waived to attract young people on dates. You could stage J.S.Bach’s St Matthew Passion (1727), Shakespeare’s Hamlet (1603), Pyotr Ilyich Tchaikovsky’s Swan Lake (1875–76) or the Rolling Stones and they’d all be packed up and gone before the gallery closed.

For her debut as Curator of the MIT List Visual Arts Center, Henriette Huldisch confronted this problem directly and mounted an exhibition that took a full season to unfold. ‘Open Tunings’ was situated in a classic white cube, but seemed determined to remain open-ended. Three times in three months the gallery was emptied and rearranged to accommodate different objects and, more interestingly, a different relationship between audience, walls, floor and time.

The constant in this three-part show was its most immaterial element: sound. Huldisch extended an invitation to artists engaged with sound to occupy the gallery in some manner for a month each, with a performance included. Huldisch could not anticipate how each of these artists would respond to the problem of extending a performance into a month-long exhibition, which was precisely her motivation. ‘Even though performance is somewhat of the medium of moment, and “sound art” is becoming slightly less obscure,’ she explains, ‘time-based art forms are in many ways less than ideally suited to the gallery or museum […] I wanted to take these contradictions head-on and organize a show around the possibility of staging sound and performance and then some sort of “residue” after, be it in audio or video recordings or props; an obviously paradoxical gesture but one that would extend the time frame of performance beyond its live execution.’

No one chose a Marina Abramovic-style ‘artist is present’ solution of endurance. On the contrary, each of the three segments opened rather traditionally with the artist’s momentary appearance, and subsequent disappearance. David Grubbs and Eli Keszler launched the exhibition with One and One Less (2014), a collaborative work that filled the gallery with recorded sound, amplified acoustically through hollow-box constructions hung on the walls. Fragments of text – drawn from an extended work of prose by Grubbs – were stenciled directly onto the walls, and explanatory material indicated that the recorded sounds in the room had been generated, at least in part, by manipulation of a reading of that text in full. 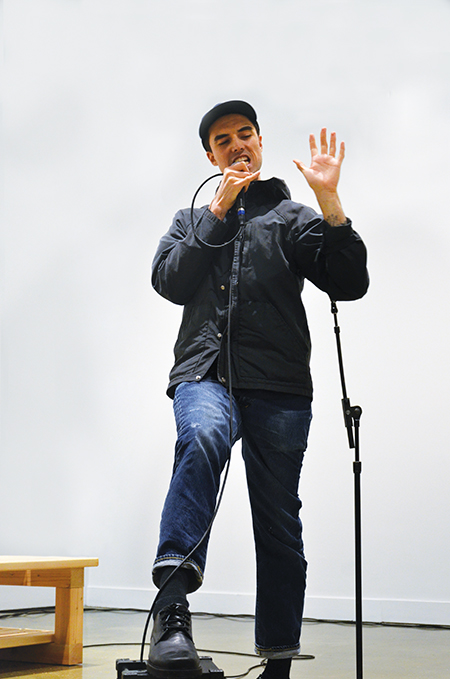 At the opening, Grubbs and Keszler addressed the audience as musicians – on voice and drums, respectively – from the centre of the gallery. Grubbs read the complete text used by the piece through a microphone, slowly and clearly, without any sound manipulation but with time constraints that altered the natural rhythm of his prose. Keszler improvised accompaniment on a drum kit and percussion, working within the time constraint but otherwise free to play as he chose. The recorded sounds of their installation played simultaneously but without synch to the performance. The audience listened as at a musical gig, applauded at the end, and then the performers left. But the recording stayed – a ‘residue,’ in Huldisch’s words, though perceived as such perhaps only in the wake of live performance.

A month later, the cube had been swept clean for three benches scattered with samplers and other sound equipment, and a large photographic piece against one wall. At his opening, artist Brendan Fowler bounded into the room, picked up a mic, and casually spoke/rapped/sang/chatted at the audience, all the while pacing, triggering his samplers, and glancing around the room very much as if he were at an opening of an exhibition. He was the only one looking around in this manner, however; the rest of the room was glued to his unpredictable words and gestures. At the end, he dropped the mic and exited with the same bouncy energy. Left in his wake were his samplers, with instructions for the gallery attendants to change them as they pleased. As for the photographic work, I doubt anyone glanced at it during Fowler’s performance – but, in his absence, it loomed over the gallery very much like the artist’s own figure had in his sneakers, cap and parka.

The resolution of ‘Open Tunings’, if there was to be one, was left to Hannah Weinberger, who surprised by refraining from a traditional performance, electing instead to simply be part of the gathering celebrating the opening of Not Without You. At first impression, this was the most conventional white cube showing of the three – Weinberger had ringed the room with prints, hung in a tasteful manner although the images themselves were ‘tasteless’ appropriations (from IKEA, as it turned out). A jovial, relaxed crowd gathered for this final opening to Huldisch’s debut show at the List, and as they chatted and sipped wine amid the bland prints the scene might have been mistaken for a dreadful exhibition at any anonymous gallery. But when the curator called for attention to introduce the artist and the visitors fell silent, the room spoke back. Small noises were emanating from the prints, at no greater volume than any given conversation that had just ceased. Some of these noises sounded like words spoken or quietly sung in an unknown language, some in a language known by others, some in one’s own. Triggered by our bodies – in particular by the movements of our feet, it seemed – they went on chattering so long as we were in the room.

Huldisch asked the artist if she wanted to say anything. She spoke a few appropriate words of thanks, and smiled. The audience was present.