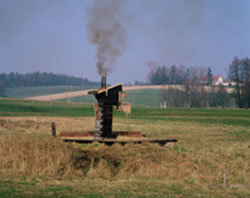 In 2008 Liverpool becomes European Capital of Culture, a sobriquet that’ll bring, it’s hoped, billions of pounds in investment, a reinvigorated job market and an all-pervading, vitamin-enriched vitality to the ailing Merseyside metropolis. Although this civic rebirth is over three years away, this hasn’t prevented Liverpool’s city fathers from bellowing it from the rooftops. Almost every public building here is hung with a banner bearing the numbers ‘08’, as though their repetition alone might speed up the hands of time and transform today effortlessly into tomorrow. It won’t, of course, and as the banners fade and become grimy with traffic fumes, they look more and more like props for a victory parade that’ll never take place.
Alongside these banners hung various flags, fly-posters and bits of bunting promoting the third Liverpool Biennial, an event that, while it claimed to reflect on the city’s often fraught, difficult realities, was in fact informed by the same metamorphic fantasy as Liverpool ’08 (essentially that of the Mersey being transformed into the Seine or the Arno). Sited in multiple locations, the Biennial’s showpiece exhibition, ‘The International’, featured 48 artists selected by four ‘researchers’ – Sabine Breitwieser, Yu Yeon Kim, Cuauhtémoc Medina and Apinan Poshyananda – on the basis of their practices’ ‘affinity for […] the culture of Liverpool’. Such an approach risks parochialism and a repetitive riffing (or even an unreflective capitalization) on certain politically or culturally charged episodes from the city’s history. Disappointingly this is what largely characterized the works in the show.
At Tate Liverpool, Satch Hoyt’s Labyrinth (2004), a maze made from swatches of raw, hand-picked cotton, drew on Liverpool’s part in the 18th-century slave trade, but said nothing that’s not said in even the driest textbook on the subject. Similarly Ursula Bieman’s video Contained Mobility (2004), a potted biography of a Liverpool-based asylum seeker shown at the Biennial Centre, so closely resembled a news report that one wondered what prevented it from being precisely that. Both Hoyt and Biemann attempt to multiply the gravity of human misery by the gravitas of art, but the net product is work in which misery is exploited, and art is little more than a pretext for that exploitation.
More impressive were the works in the International that drew not on Liverpool’s particularity but on the idea that it’s an any-place, replete with the same systems of social and cultural coercion as every other city in the developed world. At Lime Street Station, Choi Jeong Hwa’s giant garland of gaudy, inflatable flowers Happy Together (2004) fought a fascinating, losing campaign in an environment in which everything, from the arrivals board to the sheen of a platform-bought pasty, battles for visual attention, while at Tate Liverpool, Jill Magid’s video Evidence Locker (2004) showed the artist walking through the city’s main shopping centre with her eyes closed, guided by the radio-relayed voice of an avuncular policeman (‘left a bit, love, now right a bit’) watching her every move on CCTV.
If Magid had refused the policeman’s advice, she might have fetched up in front of Takashi Murakami’s RURI-Kabuto & His Friends (2004), a billboard that nestled a little too comfortably among the other billboards flanking Canning Place. An unapologetically prêt-à-porter image (I imagine it’d been gathering electronic dust in the artist’s hard drive long before he was ever approached to participate in the Biennial), its placement made a boring point about Murakami’s embrace of capitalism and a brilliant, albeit surely unintentional, point about the tendency of biennial curators to shoehorn brand-name artists into their shows, no matter how awkward or unrewarding the fit. The whole world drinks Coke, right? Why then shouldn’t every biennial, from Gwanju to the Whitney, benefit from a little of Murakami’s ‘Superflat’ fizz?
The Biennial was at its best when it wore Liverpool either lightly – as in the case of Mathias Poledna’s weird, beautiful film Version (2004) at Tate Liverpool, in which 1960s pop kids dance shuffle-footed to the sound of silence – or not at all. The works in ‘New Contemporaries’ (which, with the rather pointless John Moores Painting Prize and the patchy ‘lets-put-the-show-on-right-here-kids’ Independent, formed the remainder of the Biennial’s programme) had no truck with the sixth-form sociology of the International, and as such were refreshing. Best among them were James Connelly’s James Ensor-like paintings and Margaret Salmon’s almost unbearable, Edward Albee-like video about a love that’s curdled into hate. If these recent graduates have their finger on the pulse, it’s one that thrums with tension, fear and loathing. Such tough stuff is alien to the Biennial’s general atmosphere of unreflecting civic celebration, but perhaps it shouldn’t be. Real urban renewal is hard-won, and is more about jobs and health and homes than the comparatively cheap, vaguely defined stuff of ‘culture’. I’m left wondering whether art plays the part of midwife in Liverpool’s mooted rebirth or is merely an epidural.