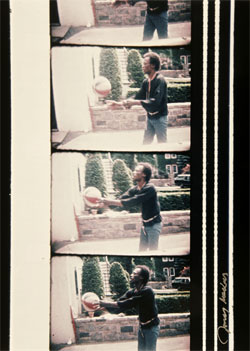 Jeff Wall at the Schaulager in Basel was a high point. This comprehensive and beautifully installed exhibition impressed on me how influential Wall’s work has been over the past 30 years, without ever losing its visual and conceptual punch.

The James Lee Byars show at the Whitney proved that he continues to avoid comfortable categorization – a good thing. Rodney Graham’s retrospective at LA MoCA pulled together the strands of his undervalued career, including his still stunning celestial film of cinnamon crackling on a hot plate. The Barry Le Va show ‘Accumulated Vision’, at the ICA Philadelphia was overdue but well-timed to provide another way into a period that for much of the rest of the year felt dominated by the long shadow of Robert Smithson.

Italian born Anna Maria Maiolino has lived in Caracas, Rio de Janeiro, New York and San Paulo. In 2005 she had her first retrospective in Brazil at the Pinacoteca do Estado de São Paulo. Her oeuvre, which ranges from intimate drawings to large installations, is driven by her need to utter a voice within the void of the world; letters and signs disperse meaning within a crisis of communication. Femininity is a code of signs that sculpts the body through experience.

The recuperation of American photography of the 1960s and the 1970s would appear to be nearly complete. This past year New York saw substantial exhibitions of the work of Diane Arbus, Larry Clark, William Eggleston, Lee Friedlander, Peter Hujar, Bill Owens and Stephen Shore, to name but seven prominent figures associated with the period. Given that the current American social landscape isn’t so pretty, it is not hard to see why such images of seemingly ‘simpler’ – although in reality, no doubt, equally compromised – times might resonate so strongly.

At the Lithuanian Pavilion at the Venice Biennale, a condensed retrospective of Jonas Mekas comprised films shown simultaneously, thus retaining the raw character of the work without killing its hybrid nature. This was a show that provoked the tragically uncommon sensation of receiving a cerebral gift.

The one that got away somehow looms largest in hindsight in the form of the hefty tome What a Life, which accompanied Georg Herold’s touring exhibition. The single most memorable work on show during Berlin’s gala weekend in May was at Galerie Max Hetzler. Herold’s X. Baracke (1986), a makeshift, roofless building made of grey stone blocks and wood laths, whose seemingly abandoned interior contains a small photograph taken in a Belgian church of a cardboard sign explaining that the tenth Station of the Cross has been removed for restoration. At a time when the apotheosis of Martin Kippenberger is almost complete (next stop Tate Modern) it’s useful to be reminded of his former partner-in-crime’s contributions to a period so heavily mythologized on both sides of the Atlantic. Karen Kilimnik’s beguiling midsummer pincer movement produced the perfect match between artist and venue not once but twice within a matter of weeks, at the Palazzetto Tito in Venice and the Haus zum Kirschgarten in Basel. A full-scale retrospective at a major American venue is surely long overdue.

The survey of Jonas Mekas’ films in the Lithuanian Pavilion at the Venice Biennale was proof that a retrospective can mine the potential that some work still has to offer. Experiencing this show was one of the few times I’ve felt like I was learning without being taught. I want more of this.

Rirkrit Tiravanija’s ‘Tomorrow is Another Fine Day’ at Rotterdam’s Boijmans Van Beuningen was a witty, knowingly failed attempt to reclaim an unreclaimable practice via various fictions promulgated by the tour- and audio- guide apparatus of the museum’s education department. It’s an interesting show to rub against ‘Samuel Palmer: Vision and Landscape’ at the British Museum: an academic, context-heavy display of the 19th-century painter’s mystical and modern-looking landscapes. What survives in each case tells us much about the problems and the possibilities of the retrospective model.

While Rirkrit Tiravanija’s performance-based, context-specific and participatory practice seems antithetical to the notion of (re-)presentation, his three-city retrospective ‘A Retrospective (Tomorrow is Another Fine Day)’ tackled the issue head-on. Although I did not actually see the exhibition at the Musée d’Art Moderne de la Ville de Paris, in its temporary home at the Couvent des Cordeliers, there was nothing actually to see. Three different accounts of Tiravanija’s career – written by the artist himself, Philippe Parreno and science-fiction writer Bruce Sterling – were recounted in the empty galleries by a tour guide, an actor reciting a text and a disembodied voice heard over the loudspeaker. One could also read them in the accompanying catalogue.

Jeff Wall at Tate Modern was a great show for obvious reasons. Wall’s influences are clear: history painting, the construction of image and narrative, social anthropology, the language of spectacle and, in Milk (1984), the formidable use of the colour brown.

With its attempt to deliver sensual epiphanies, the Venice Arsenale left me and the friends I was with bored and sniggering like schoolboys. When we entered the Jonas Mekas exhibition in the Lithuanian Pavilion, though, we were instantly transfixed. It was clear that, in contrast to the spectacle outside, the beauty of Mekas’ work lies in the way in which he asks what the emotional value of images can be, by carefully editing and commenting on them with deep affection and gentle irony. I think his are among the best films about love I saw in 2005.

Stockholm Moderna Museet’s show on Swedish luminary Lars Englund. The range and quality of the work, impeccably displayed, made me wonder why I’d never heard of this artist before.