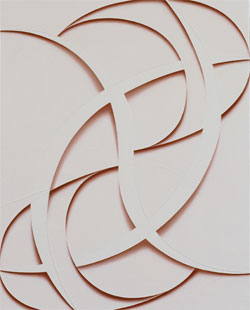 ‘Ours is the time of ready-made artists who occupy their place in an incompetent way and only reaffirm their blatant lack of qualities – who have no influence over the cultural apparatus, even less over its political function’, writes Claire Fontaine, who is herself a ready-made artist, a rogue android who masquerades as human only because humans themselves behave like robots. ‘Foreigners Everywhere’, the title of her show at Reena Spaulings in New York, was also, in Arabic translation, the text of a neon sign in the gallery window. This show was a direct reminder of the power of image, text and idea.

Tomma Abts exquisitely constructed paintings at the Kunsthalle Basel, and Artur Zmijewski’s concurrent survey show, also at the Kunsthalle, were impressive. The presentation of Zmijewski’s film works dating from the late 1990s to the present and the powerful installation of the set for his film Repetition (2005), shown in the Polish Pavilion at the Venice Biennial, were a moving exposition of the artist’s use of film as an extension of sculptural space to plumb the depths of human behaviour. Angela Bulloch’s exhibition ‘To the Power of Four’ at the Secession, Vienna, was a revelation of the potential of her work and has given me a new art hero.

Mike Kelley’s show ‘Day is Done’, at Gagosian in New York, finally marks the market’s acceptance of this artist’s importance. Olafur Eliasson’s installation of shifting daylight at Malmö Konsthall, Sweden, was more elegant and less spectacular than he can be, and better for it. Catherine Murphy’s drawings in her show at Lennon Weinberg in New York were so strange they passed beyond her normal pictorial dialectics. In a decrepit warehouse on the coast in Margate, England Mike Nelson’s characteristically labyrinthine project tied together drug hallucinations with those provoked by the nostalgia of a seaside town.

Delson Uchoa lives in Maceió in north-eastern Brazil. Apart from this show at the Museu de Arte Moderna, Recife, he has rarely shown anywhere, except for a panel in the local airport. He has developed an intimate relationship to painting that recalls Armando Reverón and Bispo do Rosário. A reader of Dante (and father of his own Dante), he constantly searches for a torrid Paradiso. He stands alongside Beatriz Milhazes as the contemporary chapter of Brazilian colour lineage formed by Eliseu Visconti, Tarsila do Amaral, Alberto Guignard, Alfredo Volpi, Hélio Oiticica and Cildo Meireles. Other good solo shows this year include Eliane Prolik (Pinacoteca do Estado de São Paulo), Nelson Felix and Marcia X (Paço Imperial, Rio de Janeiro), and Christiano Rennó (Gesto Gráfico, Belo Horizonte).

Is Mike Kelley’s ‘Day is Done’ the best show ever? Developed from 30-odd found high-school yearbook photographs of students participating in such extracurricular ‘folk entertainments’ as plays, religious spectacles, fancy dress days and hazing rituals, it was labyrinthine in both its formal and its emotional complexity. Arranged like a dystopian trade fair, the term Gesamtkunstwerk doesn’t quite do justice to the vast territory the show both explores and explodes. If I was a young artist encountering Kelley’s work for the first time here I would start making things immediately or simply give up.

Francis Alÿs’ ‘Seven Walks’, organized by Artangel in London, was one of the most thoughtful exhibitions of 2005. This probably had a lot to do with the fact that it was held not in an institution but in an old house with its original fixtures, without any ensuing gimmicky, sentimental pretension.

At Milton Keynes Gallery Phil Collins’ el mundo no escuchará (The World Won’t Listen, 2005) was a heart-aching karaoke compendium of The Smiths’ greatest hits, filmed in Bogotá and performed by a motley crew of local fans. Anri Sala walks a comparable tightrope between sadism and melancholy. His new video Long Sorrow (2005), seen at the Hamburger Bahnhof, added to an already impressive filmography that includes the earlier Ghostgames (2001), which I finally caught up with in Eva Meyer-Hermann and Charles Esche’s exercise in cultural cross-pollination ‘Istanbul–Eindhoven’ at the Van Abbemuseum.

Patty Chang’s video installation Shangri-La (2005) at the Hammer Museum, Los Angeles describes the search for the land of eternal youth in the Himalayas. Chang’s slapstick anthropology results in a fittingly inscrutable sculpture, which we see being produced in the video: a mirrored chipboard mountain placed on a rotating platform, which according to the artist is ‘a kind of a giant sacred mountain prayer wheel crossed with a disco ball’.

Loris Gréaud’s ‘Silence Goes More Quickly When Played Backwards’ at Le Plateau, Paris was an excellent admixture of film, design and botany that was the only exhibition I visited to be perfumed with the aroma of the planet Mars. More modest, but fascinating in its freakish singularity, was Tomoko
Konoike’s show at Mizuma Art Gallery, Tokyo. Here meticulous drawings of girls, wolves and rubbery daggers combined in a very private fever dream.

In Melbourne: Nike Savvas ‘Atomic: Full of Love, Full of Wonder’ and Callum Morton’s ‘Babylonia’, at ACCA; Emily Floyd’s ‘A Strategy to Infiltrate the Homes of the Bourgeoisie’ and Daniel von Sturmer’s ‘Into a Vacuum of Future Events’, at Anna Schwartz Gallery; Nick Mangan at Gertrude Contemporary Art Spaces; Marco Fusinato and Lyndal Walker at the Centre for Contemporary Photography; in Sydney Danius Kesminas’ ‘Museum Fatigue’, at Darren Knight Gallery.

Coining the act of ‘mobbing’ – a term for when birds attack predators that pose no immediate threat – as a metaphor for pre-emptive strike, Dave Hullfish Bailey’s ‘Banding Station’ at IBID Projects in London reflected upon the political theatre that surrounds the Iraq war. Gustav Metzger’s Eichmann and the Angel at London’s Cubitt brought together complex narratives through references to a Paul Klee painting, Hannah Arendt and Walter Benjamin texts and the Eichmann trials. Credit is due to a small non-profit space for commissioning an important new work.

Fusing church iconography with a Duchampian peep-show and explicit references to USA politics, Robert Gober’s installation at the Matthew Marks Gallery examined the state of faith in American society today. Water spouted from the nipples of a headless Christ figure suspended on a crucifix, which was flanked on either side by doors slightly ajar. Gober alluded to the Christian right’s polarizing influence, the sex scandals embroiling the Catholic Church, the events of 9/11 and the G.O.P.’s exploitation of that tragic day. But beyond that the artist seems to suggest that transcendence through belief may still be possible in our all-too-corrupt age.

Not any particular solo shows but individual pieces: Phil Collins, el mundo no escuchará (The World Won’t Listen, 2005) in Istanbul (particularly the live club night); Johanna Billing’s most recent video Magical World (2005) shown in Istanbul and at Hollybush Gardens, London and Jimmy Robert and Ian White’s performance Six Things We Couldn’t Do, But Can Do Now (2004) curated by Catherine Wood at Tate Britain.

One of the most frustrating afternoons I had last year was the one I spent visiting galleries in Chelsea, New York. I have seldom seen so much painfully irrelevant work in one place. What more than made up for it was a studio visit with New York-based artist Jutta Koether who for years now has been developing her painting, writing and music in an uncompromising way.

The heart of Nedko Solakov’s ‘Leftovers’ at the Zurich Kunsthaus was an enormous wooden framework jam-packed with 99 art works, ‘a selection of my unsold pieces from the private galleries I work with’. ‘Leftovers’ is basically one big crowded mesh of Solakovian humour, curious display schemes, subtle art world self-reflexivity, delicious art market embarrassments and a head-spinning hint at all the untapped possibilities of what an exhibition can be.