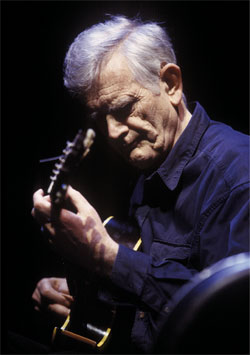 erek Bailey was a singular musician who began his career playing with jazz ensembles and dance hall bands in clubs, on radio and TV. In the early 1960s he became increasingly interested in the possibilities of freely improvised music (or Free Improvisation), which is, broadly speaking, music performed solo or in a group with no prior planning, no score to follow and ideally without conforming to any given style. His earliest experiments with this approach were playing guitar with the group Joseph Holbrooke, (named after an obscure English composer), with Tony Oxley on percussion and Gavin Bryars on bass. Bailey subsequently played with John Stevens’ Spontaneous Music Ensemble, co-founded Incus Records, and was pivotal in forming Company Week (an annual, week long series of collaborative performances that ran in London from 1976–94). He played with countless musicians, amongst them Anthony Braxton, Evan Parker, and John Zorn, alongside many solo gigs and recordings, such as a typically perverse album comprising reworkings of jazz ballads (Ballads, 2002). His final release, Carpal Tunnel Syndrome (2005), referred to the condition that had recently crippled his hands and forced him to develop a different approach to his instrument. Throughout his career, this fiercely inventive musician developed new vocabularies and syntaxes for the guitar – spidery, percussive, restless, caustic and delicate. On December 25th 2005, Bailey died from complications con-nected to Motor Neurone Disease.

This is not the place for an analysis of Bailey’s career. For that I’d recommend Ben Watson’s polemical and definitively undefinitive biographical study Derek Bailey and the Story of Free Improvisation (2004). Nor is it possible to catalogue here the complex formations, myriad theories, internecine alliances and enmities of those involved with Free Improvisation. Rooted in the immediacy of performance, recordings only tell half the story. Conditions of personalities, audiences and place – concert hall, home and club (or in the case of Han Bennink and Peter Brötzmann’s 1977 recording Schwarzwaldfahrt, the Black Forest) remain matters of speculation. Partly an offshoot of what jobbing session musicians were trained to do, and partly the result of exploring the twilight zones of jazz and avant-garde classical music, Free Improvisation tends to wrong-foot any attempt to locate its origins and characteristics within any musical genre. (Some confuse it with Cagean ‘chance’ music without understanding that performers of John Cage’s music had to recreate ‘chance’ elements dictated by the score.) Often eschewing tonality and regular rhythmic meter, to ears conditioned by western musical conventions Free Improvisation at best can sound like a wild musical catharsis, and at worst as if the performers are making it up as they go along – which, of course, they are. However, to describe it as some kind of primal scream therapy for musos is about as helpful as assuming that more paint on a canvas equals more meaning. Playing without predictable anchors and frameworks requires huge amounts of concentration and acute sensitivity to what the other players around you are doing.

After hearing of Bailey’s death, I picked up a copy of his book Improvisation: Its Nature and Practice in Music (1980) in which he speaks to performers from all walks of musical life about their thoughts on extemporization. Bailey roughly divides playing into two types: idiomatic and non-idiomatic, or, in other words, either using the established mores of a musical genre or trying to ignore them and discard musical habits. The book details the historical uses of improvisation, including the continuo techniques of Baroque harpsichordists, Indian ragas, Spanish flamenco, jazz, and (I was surprised to learn) church organ music. The second half of the book forms a loose, potted history of Free Improvisation including reflections from many of the major performers about their own experiences.

The contingent nature of Free Improvisation tends to generate much excitement about its uncommodifiability. Many musicians involved express disinterest for recordings and celebrate its non-hierarchical nature. With gigs held in tiny venues, and with its recordings mainly released through cottage industry micro-labels, it’s easy to romanticize this kind of music as a kind of extreme avant-garde resistance cell holding out against the industry machine. In a sense, Free Improvisation functions as a kind of relational aesthetics for music. In his book, Bailey discusses the idea of playing ‘conscious of ensemble’, and how ‘ … the greatest rewards in ad hoc performance are to be gained in playing with other people … the essence of improvisation, its intuitive, telepathic foundation, is best explored in a group situation.’ Many so-called ‘socially engaged’ practices in art over the past ten years have co-opted music as a cipher for sociability, assuming that the act of making music in a group automatically promotes social togetherness. However, what is often lacking in such an approach is any sensitivity to the meaning of the music itself. A recurring mistake that artists make is in vicariously latching onto the sociological characteristics of music and performance – be it the sub-cultural capital of popular music or the gravitas of classical – and merely treating them as short-cut signifiers of youthful rebellion or timeless seriousness. Free Improvisation is reliant on connectivity and sociability, each musician bringing their own thing to their playing; primarily it is about the here and now, the thrills and spills of making music on the fly. Yet there is, of course, the paradox that musicians trying to play Free Improvisation end up making music that just sounds like Free Improvisation – the non-idiomatic fossilizing into idiomatic. Watson, in his biography, describes Bailey as a kind of musical Heraclitian; trying never to step in the same river twice.

In a telephone call to Watson after a magazine interview in 1998, Bailey said of recorded music ‘I have very little interest in the end product. My preoccupation is with the nuts and bolts … what it is that makes this stuff work and how sometimes it doesn’t work … it’s a bit like jigsaw puzzles. Emptied out of the box, there’s a heap of pieces, all shapes, sizes and colours, in themselves attractive and could add up to anything – intriguing. Figuring out how to put them together can be interesting, but what you finish up with as often as not is a picture of unsurpassed banality. Music’s like that’.