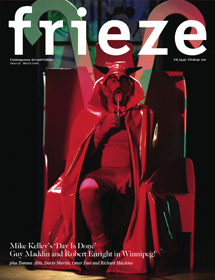 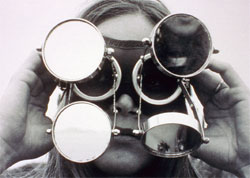 Psychoanalyst Suely Rolnik and Corinne Diserens, Director of the Musée des Beaux-Arts in Nantes, first collaborated on an exhibition dedicated to Brazilian artist Lygia Clark (1920–88) five years ago. That retrospective brought together an impressive number of works and documents spanning three decades. It contextualized Clark’s pivotal role in the Rio de Janeiro-based Neo-Concrete movement (1959–61), which challenged rationalist Constructivism and promoted a subjective, organic interaction between the art work and the spectator; the show also revealed how Clark sustained those concerns throughout her career. Rolnik and Diserens’ second collaborative effort, subtitled ‘From work to event. We are the mould, it’s up to you to breathe substance into it’, focuses on the artist’s later production, notably on the experimental, collective ‘Nostalgia of the Body’ workshops she conducted at the Sorbonne in Paris during the early 1970s and on the individual therapeutic ‘Structuration of the Self’ sessions she undertook on her return to Rio in 1976.

The curators aimed to establish a ‘memory’ of Clark’s radicalization of the relationship between, artist, work-object and spectator through a presentation of archives, documents and, to a much lesser extent and effect, art works. Monumentally enlarged photographs of Clark’s corporeal experiments, which she called ‘propositions’, were arranged around the vast, luminous internal courtyard of the 19th-century Beaux-Arts museum. The architecture dwarfed the pictures as well as the tent set up for viewing Rolnik’s 52 video interviews with Clark’s friends, acquaintances, students and colleagues. The same interviews could be consulted individually at a self-service video station in the outer café space, which is what I did since the tent was being mounted when I arrived. Naturally, some of the portraits of Clark are more captivating than others. Without guidance the uninitiated viewer might find the prospect of sifting through the dozens of DVDs daunting.

While we never actually see Clark in the interviews, two documentaries presented on monitors in the central space – The World of Lygia Clark (1973) and Memory of the Body (1984) – help to clarify our image of the artist and her work. The former contains footage of her communal, psycho-sensorial experiments, such as the disconcerting Baba antropofágica (1973). A person lying on the floor is surrounded by a group of people with spools of coloured thread in their mouths. The standing participants unravel the saliva-coated thread from their mouths onto the supine figure, and then they collectively lift off the cocoon. In the latter video we witness an individual ‘Structuration of the Self’ session. Clark presents and describes her ‘relational objects’ – plastic bags filled with air, seashells, padded cloth, stones caught in nets – which she then rubs against or simply places on and around the naked body of her male ‘client’. She extends a rubber tube from her lips to his ear and blows or gently clucks through it. When the session ends, the man declares, ‘It was as if I was all surface, the place where we meet the world.’ At once kooky and clinical, it is an excruciatingly intimate interaction to watch.
Some of the original ‘relational objects’ invented and used by Clark are safely delimited in a no-touch zone. Given the progressive disappearance of the aesthetic object from Clark’s work, these feel like relics. Replicas are provided on two tables, and we are encouraged to explore them and their uses. These include the ‘Máscaras Sensoriais’ (Sensory Masks, originally 1967), coloured hoods with sewn-in noise-making elements, aromatic seeds or herbs, and ocular obstacles that provoke and destabilize the senses. Photo-documentation shows these masks being used in a group exercise; on my own and claustrophobic, I missed the element of ritual. I sniffed at them, peeked through them and shook them about but did not dare cover my head.

In a show largely consisting of documentation or material traces of experiences that were not made for display, the inclusion of Clark’s paintings, early wall pieces, the ‘Casulos’ (Cocoons, 1959) and ‘Contra-relevos’ (Counter-reliefs, 1959), and her hinged sculptures the ‘Bichos’ (Animals, 1960–3), grouped together in an area that is not visible from the central space, was disorienting. Not because they highlight the fact that certain items are more artful than others, or because painting and sculpture throw us back into our comfort zones, but because each item brings into play a different mode of attention and solicits its own form of response. Clark was a great advocate of reciprocity, and perhaps no exhibition can really deliver on her promise. All I know is that, facing the works on the walls after catching a glimpse of the artist’s later propositions, I felt a heightened awareness of my physical presence as part of a more anonymous public, rather than the vital, psycho-social fabric Clark envisaged.