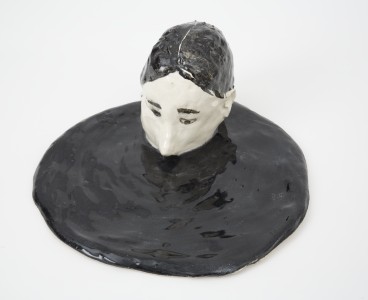 While most of Chelsea opted for the de rigueur September solo show, the Gladstone Gallery played the maverick and returned from summer with ‘Makers and Modellers’, a teeming group exhibition of 29 artists working in clay. The material choice was unexpected and bold: with contemporary sculpture increasingly reliant on complicated fabrication and highly orchestrated production, ceramics become the antipode, a low-tech, handmade practice that is generally associated with craft or decorative arts. To temper this perception Gladstone peppered the show with famous names not necessarily known for their clay work – Urs Fischer, Elizabeth Peyton – and maintained a firm, faintly derisive and certainly unnecessary distance between the works on view and those of ‘master potters and ceramicists’.

The chosen artists ranged in age, stature and background, and contributed a diverse set of sculptures that were loosely arranged typologically: abstraction, assemblage, pseudo-functional, mythological or fanciful, and anatomical. The sheer density of work made these themes difficult to absorb separately, and the effect was vaguely schizophrenic: a catch-all installation that bounced enthusiastically from one piece to the next and used such a capacious definition of clay that sometimes it did not even include clay (again, Urs Fischer and his ebullient, bulging vase of fresh lilies, That’s The Way It Is With The Magic. Sometimes It Works And Sometimes It Doesn’t (2000) made of materials including plaster, silicon and polyurethane foam).

Nowhere was this zeal more evident than in the main gallery, where an extraordinary concentration of small sculptures on large pedestals vied for space. As a result, some compelling works were diminished, such as those of Klara Kristalova, a Czech-born artist who lives and works in Sweden. She exhibited small figurines – a women blindfolded, a man submerged in a pool of water, a blackbird in a tree – that evoked the rich, dark world of fairy tales. Scattered among so many others statuettes, their enigmatic peculiarity was reduced, and the story embedded within, and between, them was stifled. Similarly, Rebecca Warren’s masterful, grotesque sculpture evoking Willem de Kooning in colour and form was easily passed over; and Jonathan Meese’s Neo-Expressionist busts were denied the circumambulation they screamed out for. Elsewhere, Sam Durant’s deft political stance (a porcelain lawn chair titled Light Blue, Unique Mono-Block Resin Chair, Built at Jiao Zhi Studio, Xiamen, China, Produced by Ye Xing You with Craftspeople Xu Fu Fa and Chen Zhong Liang. Kang Youten, Project Manager and Liaison, 2006) was drowned out by the cluttered visual noise around it.

While these examples reveal the generally high quality of the work stowed within the close quarters, they also show how the clay theme encouraged formal interpretations that often trumped the individual intention or conception of particular sculptures. Within this context works that explored process and the physical characteristics of clay were particularly successful. These include three Anish Kapoor sculptures from 1994 where the artist experimented with unfinished surfaces and investigated oppositions within the medium (interior/exterior, rough/shiny, glazed/bare, open/closed). Like studies, they revealed some of the exploratory process absent in Kapoor’s more refined and polished work.

At the other end of the spectrum were William O’Brien’s chaotic coiled pots. Spiralling joyfully out of control, they joined a raucous collection arranged atop a large wooden table, Cinaedus Table MDCCLXXV (2007), that also included glitter shoes, star-catchers made of yarn, glassware, pine-cones, butterflies in jars, cacti, tinfoil, candle-sticks and a gilded log, among other art and artefacts. Treasures or trash, O’Brien treated each object on an equal footing, and the sculptures emit a self-assured spirit reminiscent of Bruce Connor’s assemblages. Andrew Lord benefited from a display of 20 works from his series ‘…the bowery, August 7 p.m.’ (2007). Most were elements cast from his body – sole of foot, nape of neck, testicles, torso – that were loosely glazed in a grisaille palette and hung on the wall. The totality of Lord’s endeavour, the equanimity given to each part of the disassembled body and the omnipresent sense of New York’s melancholic streets gave the room a pulse by letting the project breathe.

What the show did not answer was: why these art works now? With no unifying bent other than an oft-overlooked medium, the eclectic collection was unpredictable and entertaining, but it made no claim for a past, present or future state for clay. Rather, it began a process of assimilation into the mainstream, intimating that collectors and – judging from the number of works created this year – artists are hungry for straightforward, handmade works.