BY Alessandro Rabottini in Reviews | 01 MAR 11

A
BY Alessandro Rabottini in Reviews | 01 MAR 11 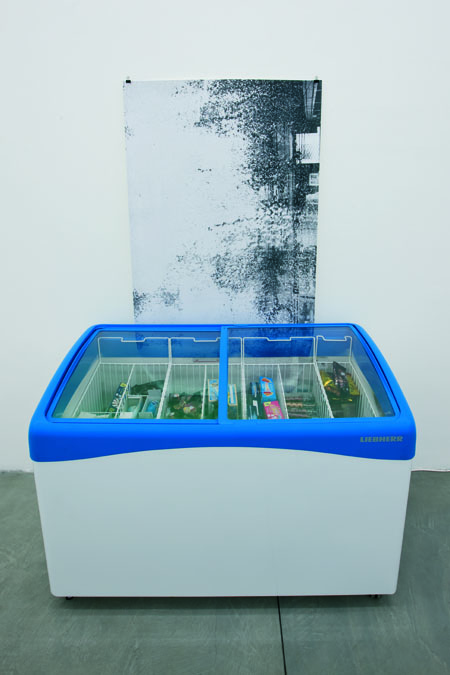 Many artists in recent generations have examined the idea that resources for representing an increasingly intangible reality may lie in the codes of abstraction. One of the most fertile paradoxes of Modernist abstraction – starting from Malevich – was its structural ties to a materialistic conception of the work of art; today, artists such as Mandla Reuter are renegotiating the relationship between abstraction and materialism, with an eye on the effects of the digital era.
In his first solo show in Italy, Reuter orchestrated a landscape of found objects, photos, sound and prints, arranged according to a logic by which abstraction and representation, and analogue and digital modes, reflected in on each other. Many references leapt out in this group of works – from Robert Smithson to Olafur Eliasson – but the Berlin-based artist’s precision and simplicity made things breathe in a way that was clearly his own.
The photographic series ‘Prospect, 330 Waldon Pl.’ (all works 2010) offers a succession of upside-down views of Los Angeles, all taken from the same observation point at different times of the day. In some cases the horizon laps at the upper edge of the photo as if it were trying to escape the advancing sky, while in others the meteorological density of dawn blended the earth into the atmosphere, making the landscape appear monochrome.
The three large, untitled works that punctuate the ‘Prospect...’ series are, by contrast, the result of several offset printing runs on individual surfaces. In these works the stratification of successive levels of four-colour printing generated a black surface with an extremely tactile quality, almost rough, as if to express the density of the multiple phases of printing. This quality is underlined by the use of heavy frames to make the pieces objects in space, seeming like black mirrors.
An installation titled The Fridge comprised seemingly disconnected elements: a real fridge-freezer full of ice-cream in the main exhibition space, while a steady noise emanated from the adjacent room. The source was only partially accessible, as the latter gallery could only be glimpsed through the crack of a door. All that was visible were gradations of changing projected colours similar to those created in chromotherapy massage baths. The noise turned out to be a recording of Niagara Falls – not easy to identify since, paradoxically, its excess of frequencies seemed all too similar to artificial sound.
Reuter successfully conferred sculptural qualities – a sense of physical density and formal panache – to each of the elements in this exhibition. Using sound, photography and mechanical printing techniques, he collected the elements of a landscape and made nature appear like a creation of human and rational intelligence, rather than as an immersive and Romantic force.