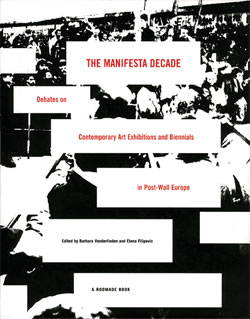 The surprise cancellation of Manifesta 6 by Nicosia for Art Ltd has thrown the question of the biennial/triennial – of late, the contemporary art world’s most visible and economically potent expression – dramatically into the spotlight. At the very least it is now possible for everyone to see the not always happy nexus of financial, political, media and, yes, artistic interests that lie behind such headline shows. In this context the recent publication of The Manifesta Decade is an even more timely and pertinent event.

Editors Barbara Vanderlinden and Elena Filipovic have assembled a small archive of materials, not only covering the history of the Manifesta exhibitions, from the inaugural 1996 show in Rotterdam to the fifth edition in Donostia/San Sebastián, but also treating more broadly the political and artistic contexts in which the ‘European biennial’ has developed. These are, on the one hand, the so-called ‘long decade’ from the fall of the Berlin Wall to the recent ‘No’ vote to the European constitution, a time in which the once much ballyhooed ‘end of history’ has already seemed to play itself out, and, on the other, the proliferation of perennial mega-exhibitions as the main vehicle for a ‘globalized’ contemporary art world. A detailed chronology – the first of its kind, to my knowledge – sets the history of biennials since 1989 against the backdrop of major political and intellectual events. The book inscribes itself in ‘debates on contemporary art exhibitions and biennials in post-Wall Europe’ (as reads the subtitle), and emphasis ought to be put on ‘debates’: the main editorial innovation of The Manifesta Decade is the inclusion of critical responses in the margins of the main articles, creating the impression of an ongoing dialogue not unlike the practice of respondents at academic conferences. This idea of thought-in-progress, rather than a finished theoretical masterpiece, mirrors the protean nature of the book’s subject matter: the rapid changes and realignments that have taken place in politics and aesthetics since the end of the Cold War.

Regarding both issues, The Manifesta Decade is a highly valuable contribution, which promises to rekindle discussion of the function and purpose of mega art shows today. To mention only a few of the problems raised by the contributors: the almost unquestioned persistence of the white cube in global exhibitions despite innovations in other areas; the changing relationship between artists and curators in the era of ‘multiple authorship’; and the complicit and/or critical role of contemporary art shows in the rhetoric of the ‘clash of civilizations’ – questions of European identity between ‘new’ and ‘old’ Europe, ‘immigrants’ and ‘natives’, Christianity and Islam, East and West etc. Manifesta was conceived as an itinerant pan-European platform for contemporary art, focusing on the question of borders and in some way forwarding the idea of European culture. Now, in proper Modernist fashion, the art school of Manifesta 6 constitutes its next unwritten chapter.