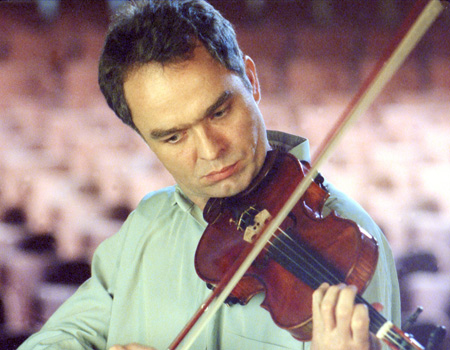 Tiny gestures – a twitch of the face, a flap of the hand, a prolonged stare – can convey so much more than words alone. Like much art, the multiple ‘languages’ we use involve all of our senses, relying heavily upon intuition and empathy to be understood. How we learn to articulate ourselves (verbally, physically and visually), not to mention more instinctive, less mediated gestures, are fundamental to Manon de Boer’s work. Presented as part of the Dutch artist’s first solo exhibition in the UK, entitled ‘Framed in an Open Window’, was a selection of five video, film and audio works, made over the last 12 years, installed in the new galleries of South London Gallery’s recent extension.
Dissonant (2010) depicts dancer Cynthia Loemij (from Anne Teresa de Keersmaeker’s Brussels-based company Rosas) performing a ‘response’ to Sonata No.2 for Solo Violin (1923) by Eugene Ysaÿe. This 16mm film begins with a blank screen, only the music playing. A few minutes later, a pale woman appears wearing a vest and skirt, her dark hair tied back. She listens intently, nodding her head slightly, frowning, and closing her eyes momentarily. The music stops: with a slow, cat-like arch of her back, she begins to dance. While Loemij’s movements feel anarchic in places – part bird taking flight, part whirling dervish – she remains in control. The absence of music emphasizes her increasingly rapid breathing and the weight of her limbs hitting the floor, in rhythmical thumps and thuds. In parts the film cuts out and we hear only these sounds, accentuating the physicality of the performance, something that’s normally hidden by the effortless image created for the stage. A dance to remembered sound, Dissonant asks whether one language (music) can be understood and expressed through another (dance) – as if Loemij had applied the logic of learning choreography through the accumulation of phrases to the memory of the sonata. It also seems a renewed effort to explore the mind-body duality that inspired artists such as Yvonne Rainer and Robert Morris in the 1960s.
Several works at South London Gallery addressed how the accumulation of knowledge through experience (in both psychological and anthropological terms) is intrinsic to how we learn to behave and respond. The sound piece Switch (1998) – an audio recording of musician Alison Goldfrapp vocally interpreting three monologues in different languages – forms a deconstruction of how language is learnt through hearing and mimicking others. It is a strange, frustrating experience, as brief moments of recognition were juxtaposed with discombobulated nonsense. The last piece finished with the sounds ‘errrgh’ and ‘ooomm’ repeated endlessly to fade – as if a child were imitating French without using words – forming an amusing sonic caricature.
If a top ten of artists’ current heroes were to be compiled, John Cage would definitely be vying for the number-one spot. De Boer’s film Two Times 4'33'' (2008) comprises two consecutive performances (both by Jean-Luc Fafchamps) of Cage’s seminal 1952 ‘silent’ piece. The first focuses upon the performance: Fafchamps sits dressed in black at a piano, staring intently at sheet music, frowning slightly and occasionally turning a page. After the requisite time has elapsed, he stops the timer and begins again. This time, the camera pans in a circular movement across the audience, capturing a young, good-looking European crowd. Dressed mostly in black, they sit, arms folded, faces earnest, gazing appreciatively at the great man. Only one younger boy stares at the floor, clearly bored. Eventually the camera focuses on a window and we see the outside world: strong wind rushes through autumn trees, with golden-green leaves fluttering against a grey sky. I felt relieved I no longer had to look at the audience – but, for Cage, their experience of ambient noise was perhaps more central to the work than the ‘performance’ itself. Two Times 4'33'' is an intriguing exercise in the ritualized reverence of the contemporary art audience.
De Boer’s work forms a kind of anti-spectacle, in a marriage of conceptual art and ‘slow’ minimalist cinema. However, beneath the stark, controlled recordings of public performance and gesture there is an undercurrent of repressed emotion. A good ‘poker face’ is something most of us learn early on – hence the need to interpret the other, harder-to-read footnotes.