Marcus Coates: 'A Ritual For Elephant and Castle' 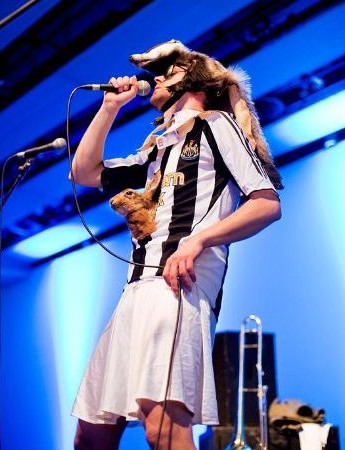 Marcus Coates’ 2004 video work, Journey to the Lower World, saw this ordinary-looking Englishman don animal skins and enter a trance state, communing with indigenous animal spirits to answer questions posed by residents of a Liverpool tower block scheduled for demolition. Comic in manner but serious in intent, Coates’ performance was a means of evoking the mystical or otherworldly to inspire or encourage an imaginative response from its participant community.

Conceived by Coates, London-based curatorial collective Nomad, and music promoters QU Junktions, last weekend’s ‘A Ritual For Elephant and Castle’ was as an attempt to recreate Coates’ experiment on a grander scale. Housed in The Coronet Theatre, a renovated 1920s Art Deco building, this ritual took the form of a night of music, a Bacchanalian celebration in the centre of a deprived area currently undergoing structural and architectural redevelopment. First was a UK debut from Septic Heart, uniting dubstep producer Shackleton – known for his gloomy, Arabic-tinged productions for the Skull Disco and Mordant Music labels – and Berlin vocalist Vengeance Tenfold. Rather than playing the role of traditional MC, Tenfold dispensed apocalyptic wisdom from behind a masquerade mask, musing on 9/11, the Book Of Revelation and the Maya calendar through inky blots of bass. Next, Swedish duo Wildbirds & Peacedrums performed a special commission, setting up in the heart of the audience surrounded by a 20-strong percussion circle. Drummer Andreas Werliin set the tempo, leading the group from a slow canter into numerous crescendos as vocalist Mariam Wallentin danced at the centre, her raw, soulful voice erupting in whoops and cries. Moments of build felt thrilling, but the peaks and troughs came erratically, and – unlike, say, the drum-circle performances of Japan’s Boredoms – at times this seemed to evoke ecstatic energies rather than harnessing them to any real end.

The closing collaboration between Chrome Hoof and Coates made for an engagingly idiosyncratic pairing. On paper, Chome Hoof’s personnel – Leo Smee, bassist with UK doom metal band Cathedral; Lola Olafisoye, a preening Grace Jones diva; and a trumpeter, bassoonist and dancers – reads so oddly as to be completely incompatible. But united by matching silver capes and catsuits, they resembled a retro-futuristic Funkadelic, and their music – lithe but heavy disco-metal – gelled with surprising coherence. Making his entrance dressed in silver suit and horse’s head, Coates was an energetic frontman, reciting poetry and accompanying the music with a selection of bestial glossolalia and gasped visions: ‘I have swallows resting in my armpits!’ But his softly spoken conclusion – that the heart of Elephant and Castle was not in its architecture, but in its community – felt somewhat scripted, and the muted response it received echoed the fact that we, the audience, were not locals, but as scattered and transient as any London gig-going crowd. The result was a spectacle, and indeed, an enjoyable one, but without a community to refract his performance off, Coates’ act lacked some of the purpose displayed in Journey to the Lower World; a shepherd, after all, is nothing without his flock.