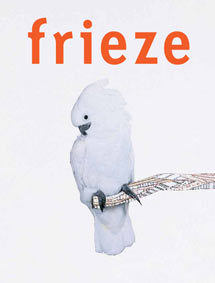 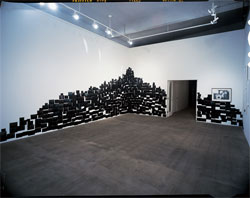 Contemporary Los Angeles couldn’t be further removed from Revolutionary-era Moscow, and the Modernist European energy of the early years of the 20th century sheds only the faintest light here. This distance is the space Mark Flores began to fill with his mysterious drawings and paintings. Giving the impression of an incomplete and unreliable archival study, Flores’ début solo show ‘Angle Lovers Take a Turn’ probed the specifics of art history in a manner that read less as critique than as a psychic hijacking of some of his key influences. Though his execution is precise and the works were arrayed with exacting neatness across the gallery walls, Flores’ simple investigation produced wildly complicated results.
Disrupting the ‘that-has-been’ effect of photography (to borrow Roland Barthes’ term), Flores has ‘blown up’ several archival photos, carefully recreating them in shades of grey, black and white pencil. The style is illustrational, and his compositions of art and artists immediately suggest the croppings imposed by the lens of a documenting camera rather than subjects drawn from life. Some show groups in action, as in Malevich Conference (2005), which depicts people in period dress pouring out of a train carriage and pausing briefly to face the viewer, or The Bed Bug 1929 (Mayakovsky, Rodchenko) (2005), a scene from an avant-garde theatre piece illustrating men in pseudo-scientific costumes extracting a body from a crystalline contraption. These scenes are interspersed with ‘still life’ drawings of geometric art objects or portraits of key figures from the Constructivist movement, all of which serve to restate the culturally alienating disjuncture of their radical works while humanizing the individuals who made them. Vladimir Mayakovsky and Vladimir Tatlin appear posing casually with cigarettes and exuding a warmth enhanced by dashing good looks and bedroom-eyed stares. Mayakovsky’s jaunty cravat and Tatlin’s open collar suggest the confident vigour it takes to make a mark on history as well as the desirous psyche.
A bookshelf in a corner of the gallery presented the viewer with some of the actual photographs and documentation from which Flores worked. While it was satisfying to be afforded a chance to leaf through the clues to Flores’ puzzle, the source material was disruptive to the indefinite moodiness of the works on the walls. This oxymoronic sense was no surprise; the use of other people’s photographs (whether it’s Andy Warhol’s silk-screened repetitions or Sherrie Levine’s re-authored photographs of photographs) has for decades presented strange dualities. The veracity of the photographic document is both doubled by its appropriation and at the same time cut in half, the realness of the ‘that-has-been’ event made more and less available to the viewer. Narrative context, that which photography eschews in the first instance, is rewritten. With these works Flores escorts this definitive tool of modernity back into the realm of the hand-made, presenting his subjects in a more ‘authentic’ form than that in which they already existed. In so doing, he perhaps sidesteps appropriation’s stark cynicism, replacing it with a naive anachronism that renders these images more precious, if less objectively authoritative, than those found in art history textbooks.
This process was further complicated by Flores’ syntactical arrangement of the renderings, which appeared to suggest his own coded meaning. This effect was most obvious in a triptych of drawings from 2005, the first part of which showed a sculptural object composed of nested concentric rings, the second a portrait of the artist Varvara Stepanova as a young girl, and the third a geometric textile pattern designed by Stepanova over a decade later. Here art determined by Utopian ideologies and systems of mechanization was intercepted by identity and history, and the range of possible reshuffled relationships these simple works produced seemed exponential. Adding to this sense were the configurations of little enamel-on-metal paintings clustered around two of the gallery’s corners. These monochromatic rectangles (Flores terms them ‘diffusion paintings’) created structures that appeared to shepherd the drawings across the walls, as if swarms of streaky abstract Malevich were marshalling Flores’ illustrated re-reading of history into being. The ambiguity of this gesture helped rescue the drawings from the banality of purely intellectual exercise. Flores, in exploring a particularly radical moment in the history of art and society through his own idiosyncrasy, managed to make a potentially dry subject of public inquiry both open-ended and deeply personal.

Malik Gaines is a writer, performer and associate professor of performance studies at New York University, USA. He is the author of Black Performance on the Outskirts of the Left: A History of the Impossible (NYU Press, 2017). A survey of his work in collaboration with Jade Gordon and Alexandro Segade, as the group My Barbarian, will open at the Whitney Museum of American Art, New York, on 22 October. He lives in New York.