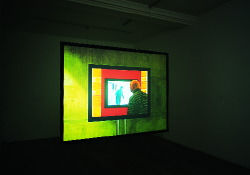 In the question-and-answer session after the first screening of Mark Wallinger's The Lark Ascending (2004) someone asked the artist why he referred to the work as a film. 'Well, if it looks like a duck and it sounds like a duck, then it probably is a duck.' Put like that, it's irrefutable - the piece has audio and projected imagery that relate to one another, and there is a definite beginning, middle and end that form a narrative arch for the viewer to follow.

Wallinger made the film by digitally stretching the frequency of a recording of lark song so that the increments of change are almost imperceptible during the 33-minute playback. The film starts with a blank, grey screen and low, gut-churning rumbles; it ends with a bright, almost white, screen and the identifiable sound of a lark singing. What happens in between is a geometric progression, a digital development from the morbidly slow to the almost true speed of audio playback, and a gradual dawning from gloaming to daylight.

Perception of time, oscillation and sound waves are dependent on the heartbeat of the receptor - the quicker the pulse, the more time seems to fly - which means that the Palaeolithic rumbles at the beginning could be emanating from a huge bird, or how a lark might sound to, say, a bluebottle. There are definite moments during the audio journey from the sluggish world of the ancients to the thrumming present when other recognizable noises can be heard. These might be as universal as whale song or as culturally specific as The Clangers and the swanee whistle, but what becomes clear is the difficulty of identifying the point of change. This fuzzy transcendence may be perceptual - when precisely does the lark song reach its correct pitch? - or a metaphor for the theoretical or spiritual. It is often the moment when something is neither one thing nor another, when new definitions must be sought.

Besides its formal and metaphysical associations, the film is also imbued with political significance. The lark is a quintessentially British bird and national identity is a concern that Wallinger examines over and over. The Lark Ascending is an example of his deftness and economy with subject matter, of his ability to choose a carrier of meaning without weighing it down with a precious load.

At Anthony Reynolds Gallery the two videos Third Generation (Ascher Family) (2003) and Via Dolorosa (2002) have a much more instant, explicit significance. Third Generation is a construction that telescopes time and place. Home videos of the Aschers, a rich Jewish family who escaped to Palestine in 1938, are played on a loop in the Jewish Museum in Berlin; Wallinger has filmed this with a fixed camera, capturing visitors walking past. This is shown, in turn, on a monitor that has then been re-filmed and tightly cropped so that the display context of this film of a film is unclear. The audience in London provides the third generation of viewers of footage that is now quite distorted. In the original Super 8 movies a family have fun in the snow, at the lakes, in a café; at times they walk, smiling or laughing, towards the camera, seeming to seek eye contact with us all these decades later and all these political and social situations removed.

Via Dolorosa is more simply constructed. A feature film of the life of Christ is almost obliterated by a central black rectangle, which masks off all but the peripheral imagery. But this is enough; historical truth has been replaced by familiar narrative and filmic conventions so that we can fill in the blanks as Christ hangs on the cross, his head finally slumped in death. Yet, what The Lark Ascending attains more readily through its abstract nature, is an ambiguity of ethics and a sort of biological truth that resides beyond the history of events. Whereas Christ and the Holocaust have fairly rigid moral messages, an anonymous bird does not.

Many among the audience at the Prince Charles were outraged at being lured into a cinema only to be denied an obvious narrative. Unable, among the noise of discontent and even mockery, to be immersed in the truly physical effect of the audio rising up through the body, they felt the lack of spoon-fed storytelling when, in actual fact, The Lark Ascending told some of the most fundamental stories of all.