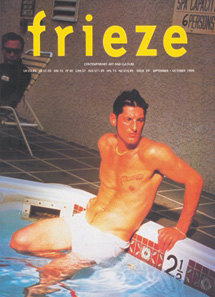 'The cricket test ­ which side do they cheer for?' This was the question Lord Tebbit floated a few years ago as a test of loyalty for Britain's immigrant population. Would they cheer for England or the West Indies, England or Pakistan? The question reveals much about the British obsession with sport, more still about British xenophobia, and suggests that the two phenomena may have something in common. This is the kind of territory explored by Mark Wallinger, whose retrospective opened in Birmingham and travelled to London in somewhat altered form. The organisers of the show pinned the theme of Britishness on it, but it is arguable that Wallinger's critique employs our national obsessions simply as a vehicle.

The exhibition surveyed ten years of varied output. Since leaving Goldsmiths', Wallinger has employed painting, photography, sculptural objects, video and installation, choosing his medium according to the ideas he wishes to explore. Wallinger is best known for the racehorse which he acquired with the help of a syndicate in 1993, and which he declared to be A Real Work of Art. His typical procedure is to insinuate his works into particular social groupings and their institutional ties, and then invite the viewer to follow. However, when we do so, we discover that a subtle act of sabotage has occurred and that we are left in a conceptual limbo, asking ourselves how we got there. A Real Work of Art was one such treacherous project, pulling in two directions into the worlds of art and sport.

A Real Work of Art couldn't be present at the retrospective, but Wallinger showed other works on a horsey theme. The exhibition included a series of paintings with the generic title Half-Brother (1994-5). Each work shows a thoroughbred horse against a plain white ground. Or rather, two horses, since each work is comprised of a pair of canvases joined in the middle, showing the front half of one stallion and the hindquarters of another. In Race, Class, Sex (1993), seen a couple of years ago at the Saatchi collection, Wallinger presented four male descendants of an Arab stallion brought to England in the 18th century. The new works develop this conceit: each pair of stallions is the offspring of a single dam ­ the two halves are truly 'half-brothers'.

Wallinger's horses are highly desirable objects. They symbolise beauty, speed and success, as well as the supposedly glamourous and exclusive world of racing. Moreover the horses are depicted life-size and in photo-realist style, encouraging the viewer in a vicarious act of possession. In Race, Class, Sex the title of the work and the pedigree of the horses prompted speculation on human as well as equine inheritance, making us re-appraise the desires the piece evoked. The new works are cleverer still in their denial of the autonomy of the represented image. In order to complete each picture we have to reconstruct the mother on which it is predicated, and through her we become aware of a whole range of invisible forces and interests that have laboured to produce these icons.

Wallinger's work is at its best when (as in the horse pictures) it is at its most seductive. He has learnt how to bring out the attractive qualities of the subjects and media he employs, and to sweeten the pill of his critique. His touch is not infallible however. The exhibition included earlier works employing school and office furniture, which make their points about institutions and institutionalisation in a dour and theory-laden manner. More recently Wallinger has explored worlds he clearly loves, but here the danger is that he can lose his ironic edge. Perhaps it is not so sad that A Real Work of Art has been sold on to a German collector: the project couldn't quite shake off an air of masculine clubbyness (surely one of its intended targets) which always threatened to alienate the viewer.

Wallinger is usually more adept in his manipulation of our desires. He is aware of how we willingly conspire in the process of representation, taking at face value that which we ought to question. Whether his work examines the institutions of art, sport or aristocracy, he tries to make us consider how value is conferred, often using humour to lead us into abrupt changes of viewpoint. Wallinger is ultimately less concerned with the institutions he examines than with the operation of identity: the images we accept of ourselves and others, and their dependence on acts of inclusion and exclusion.

One of the most successful works in the show was Regard a Mere Mad Rager (1993). The title is a palindrome, a conceit that finds an echo in the work. The piece shows a clip of a British comedian, the late Tommy Cooper, performing a stand-up routine. The tape is played backwards however, and the video monitor is visible only as a reflection in a mirrored window. The televisual vocabulary, and Tommy Cooper's humour, are both so familiar and accessible that the routine is still readable and funny. But the double displacement has a strange effect. We become aware of how Cooper is circumscribed by his act, responding to laughter rather than controlling it. Sympathy is evoked, but also a sense of unbridgeable distance ­ reinforced by the mirrored presentation. The piece is a highly effective memorial and one which refuses to simplify its human subject or guarantee its presence.